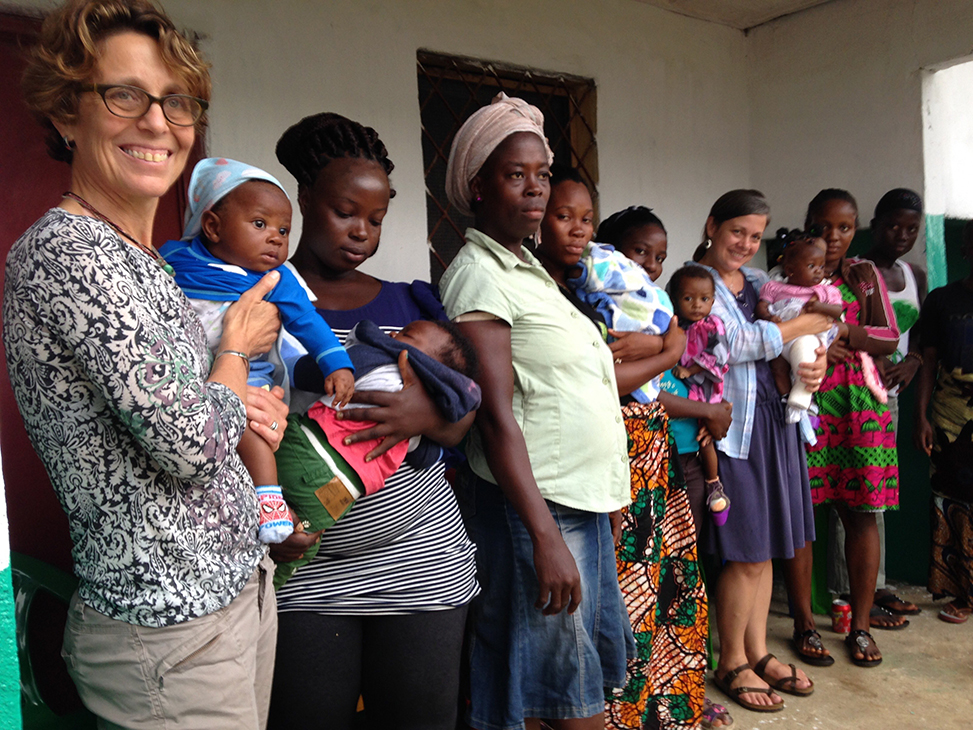 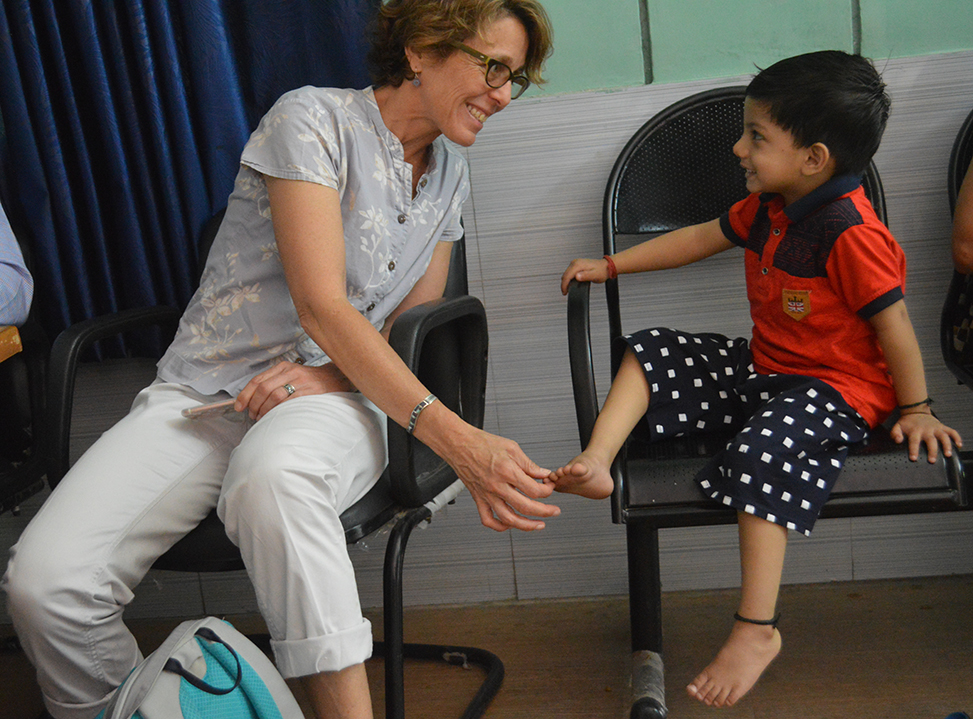 On a visit to northern India, Colloredo-Mansfeld plays with a patient waiting for his appointment at a partner clinic. Untreated clubfoot is a major issue in India, where 35,000 children are born with the condition each year. (photo courtesy of MiracleFeet) Chesca Colloredo-Mansfeld ’87 founded MiracleFeet, a global nonprofit focused on treating children who are born with clubfoot. (photo by Donn Young)

One in 800 children worldwide is born with clubfoot, a birth defect that causes one or both feet to turn inward and upward.

For children in developed countries, the treatment is routine, safe, effective and inexpensive. Doctors place a series of plaster casts on an infant’s legs over a three-month period to correct the condition. The child wears braces at night for several years to prevent relapse.

But children born with clubfoot in developing countries mostly go untreated, leaving them with a painful disability that makes walking difficult.

Chesca Colloredo-Mansfeld is on a mission to change that. Since she founded MiracleFeet in 2010 with a small group of parents and surgeons, the nonprofit organization has worked with clinical partners around the world to help more than 33,000 children avoid this fate.

“What we are doing is making sure that any child born with clubfoot in a low-income country can get the treatment they need to live with dignity and live a productive life,” said Colloredo-Mansfeld, now executive director of MiracleFeet.

For Colloredo-Mansfeld, a Morehead-Cain Scholar who graduated from UNC in 1987 with majors in political science and economics, MiracleFeet fulfills a lifelong dream to make a difference, particularly in Africa, where she was born to an English diplomat father and mother who always helped those around her.

“Having grown up in low-income countries in Africa and Asia, it was very hard not to be affected by the obvious differences in opportunity and privilege that I had compared to 99 percent of the people I was surrounded by,” she said. “I had written about wanting to make a difference in Africa in my Morehead-Cain application, but I got sucked into business and other things.”

Those “other things” included earning an MBA from Stanford University, working as a financial analyst for an investment bank, reporting on Afghan refugee projects in Pakistan for a relief organization, volunteering for CARE in Ecuador and working for several startups in the early days of the Internet boom.

She was directing a program at the University of Iowa in 2005 when a philanthropist colleague who knew of her passion for Africa and background in business strategy walked into her office. A doctor with a revolutionary treatment for clubfoot needed help taking his technique to the developing world.

“I felt someone had handed me this opportunity on a platter,” she said. The treatment her colleague described was the cast-and-brace system called the Ponseti Method, developed by Dr. Ignacio Ponseti. MiracleFeet uses this nonsurgical method to treat children in developing countries for $250 a child.

“It seemed like one of those no-brainer issues,” she said. “It’s not expensive, it’s not risky, and it completely changes the trajectory of the child’s life.”

Colloredo-Mansfeld began strategizing with some parents of children with clubfoot that she had met. They settled on a plan to create a nonprofit.

In 2008, she returned to UNC with her husband, Rudi Colloredo-Mansfeld, now senior associate dean for social sciences and global programs in the College of Arts & Sciences. After working briefly in business development for Kenan-Flagler Business School, she launched MiracleFeet in 2010 with the parent group.

Today, the nonprofit is helping partners in 25 countries across Africa, Asia, and Central and South America treat children with clubfoot. The group partners with local doctors and hospitals and provides training, technical and financial resources to set up high-quality clubfoot clinics. It helps partners expand awareness through education campaigns and added clinics to reduce travel time for families, and it works with ministries of health to endorse and embed clubfoot treatment into public health systems.

MiracleFeet also collaborates with medical device and technology innovators to improve treatment. A MiracleFeet team worked with Stanford University to develop a groundbreaking brace specifically designed to meet the needs and challenges of families in developing countries. The nonprofit is using a $1 million Google.org Impact Challenge Grant to develop a suite of technology tools, including a mobile app for managing patient records, SMS to communicate with families and online training for local clinicians.

Colloredo-Mansfeld credits UNC for kickstarting this journey — providing a liberal arts education, social justice experiences through the Campus Y and the many benefits of her Morehead-Cain Scholarship,

“I feel like I was given an enormous opportunity and have been so lucky — with all that I know and the networks I’ve been exposed to,” she said. “I feel like I would be falling short if I didn’t do something to make a difference in other people’s lives.”

Part of “Tar Heels’ True North,” a package of stories of Tar Heels who directed their compass toward creating a better tomorrow. Read more stories:

Examining what divides us

From math to mental health