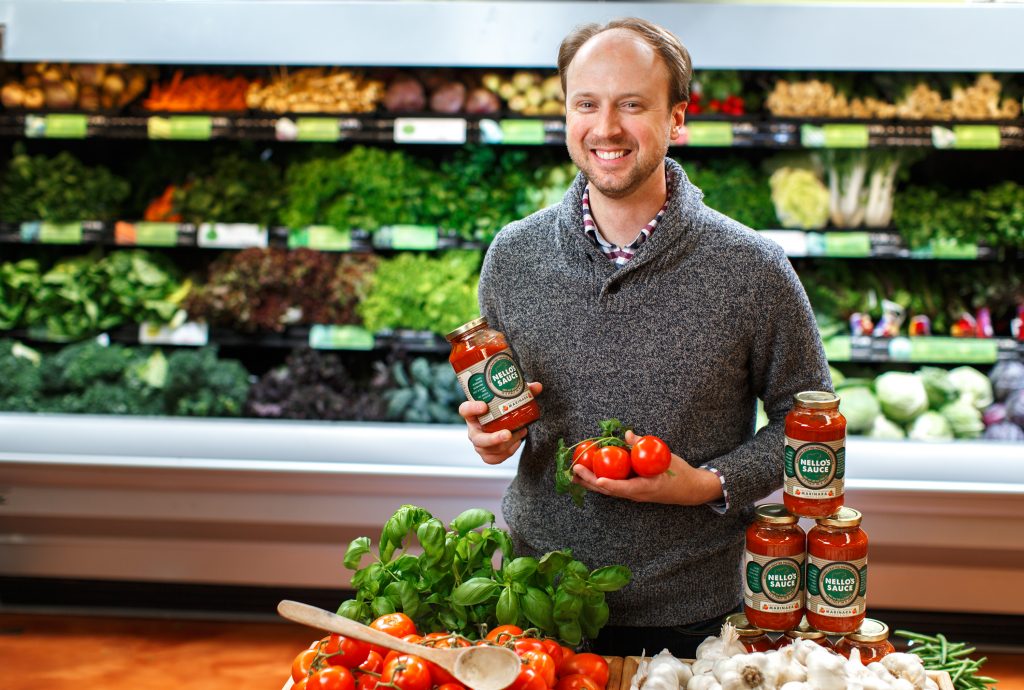 A graduate with a Ph.D. in Italian studies who founded a premium tomato sauce company. A marketing consultant who became England’s first black High Sheriff. An NPR lawyer-turned-international photographer. Read on for tales of three Carolina alumni who share this in common: a well-rounded liberal arts education that led them to become masters of reinvention.

A love letter to Italy in a jar: Neal McTighe (Ph.D. Italian studies ’07)

When you taste a spoonful of Nello’s premium tomato sauce, Neal McTighe wants you to be transported to his Italian great-grandmother Angelina’s kitchen, where she prepared her beloved “gravy” for family members so often that she “wore out the linoleum in front of the stove.”

It’s more than just a “soulless jar of sauce;” it’s about the story in the jar.

McTighe’s own story involves a nontraditional path toward becoming a successful entrepreneur. Armed with a Ph.D. from UNC in 2007 and a dissertation on Italian Renaissance philosopher Giordano Bruno, he had set his path on academia. But the economy was tanking, job openings at universities were tight, and he ended up taking a job at Duke University Press.

Sitting behind a desk, not using his Italian at all.

“I thought, ‘What do I really love about Italy?’ It was the people and the food and the history,” McTighe said. “That gave me a chance to reinvent myself.”

He started out with a website and a Facebook page, writing about Italian food and travel in a “really authentic way because I was using my ability to understand the language and to vet sources and to do research.”

McTighe began to dig deep into his family background, realizing that he had a genuine product he could sell.

He started out making sauce in his kitchen. Today Nello’s Sauce (so named because his Italian friends call him “Nello”) is manufactured at a facility in North Carolina, sold online and shipped out by the tractor-trailer load to about 700 retail locations nationwide It has received great press in publications from Southern Living to The New York Times.

How is this connected to his dissertation on Bruno? To McTighe, it’s all perfectly logical.

“The humanities teach expansiveness of thought,” he told a Gettysburg College audience a couple of years ago. “Having the intellectual freedom to explore and expand my mind allowed me to envision, to create a business.”

But going back to that idea of story — McTighe wanted Nello’s to be more than just a business. Nello’s Sauce supports the Food Bank of Central and Eastern North Carolina. He hopes to see Nello’s contributions to the Food Bank grow from hundreds of jars of sauce a year to thousands.

And the heart of a teacher still lives within McTighe, who advises students today to “be inquisitive and develop a thirst for knowledge.”

“I tell them to do both: Major in the humanities and a pre-professional program. You’ll enrich your soul.”

From her earliest childhood, Peaches Golding had both a love of science and an international outlook.

She enjoyed an aquarium full of breeding guppies, a colony of ants that lived on the dining room window sill and a series of scientific educational kits at her disposal.

She and her sister lived with Colombian families as part of a high school exchange program, and her family traveled to Canada and Mexico for vacations.

Still, even she couldn’t envision the twists and turns her career path would take after graduation from Carolina in 1976 — from a job in the biology labs of the University of Ibadan in Nigeria to becoming England’s first black High Sheriff.

Golding’s resume reveals a passion for reinventing herself. A partial snapshot: Marketing Cotswold Wildlife Park in Burford, Oxfordshire, while her husband served as park director. Serving as communications manager for a consortium of aluminum manufacturers. Founding a marketing business.

“My studies at Carolina enabled me to enjoy an informed and enlightened existence,” said Golding.

One day Golding was invited to a reception for business and religious leaders at St. James’s Palace.

That led to a long-term role working for Charles, the Prince of Wales, to develop more minority-owned businesses in the British supply chain. In 2009, she was appointed an Officer of the Order of the British Empire by Queen Elizabeth II. In 2010, the queen asked her to serve a one-year appointment as the first black High Sheriff in England, representing the city and county of Bristol.

A High Sheriff represents the monarch and participates in civic, religious, royal, judicial and other activities within one’s ceremonial county area, Golding explained.

Today she remains busy, from serving on the board of a mental health partnership to trustee of one of Britain’s best-loved ships and tourist attractions to principal consultant for an executive search and recruitment firm.

“As I approach 40 years since my graduation, I see that my career path was totally unpredictable and all the more enjoyable as I was stretched molded, squeezed and burnished along the way,” she said.

“Photography is nothing — it’s life that interests me.”

Indeed photography, and the quest for an interesting life, have propelled Jackson down a road well traveled (literally), from print journalist to vice president/general counsel of NPR to teaching photojournalists around the world how to cope in dangerous situations.

At Carolina, he began his academic career as a chemistry major but later developed a love for and majored in political science with an additional concentration in economics. He worked for The Daily Tar Heel, chaired a campus political party and began developing a passion for photography.

“The whole atmosphere at Carolina when I was there was constantly intellectually stimulating me, both inside and outside the classroom,” he said.

He took a job after graduation in 1965 at The News & Observer in Raleigh, then worked at The Washington Post while attending law school at Georgetown University.

He began working in regulatory law and corporate litigation and eventually joined NPR as chief legal officer in 1996.

“I spent the next 11 years working there through a key period of expansion of NPR into a multimedia operation,” Jackson said.

But his love of photography was always present, and Jackson decided it was time to leave NPR and head down a different road.

For five years, he served as chairman of VII Photo Agency, which specializes in coverage of conflicts around the world.

Still, he wanted to do something more, to give back.

In 2014, he founded Trauma Training for Journalists, which teaches local journalists, photographers, translators and others in hazardous reporting environments how to deal with physical and mental traumas.

Today, he lives on a farm on the Eastern Shore of Maryland and maintains an apartment in Washington, within easy access of airports for international travel.

“Being exposed to the broader base of humanities and arts exposes you to the heart of the world.”