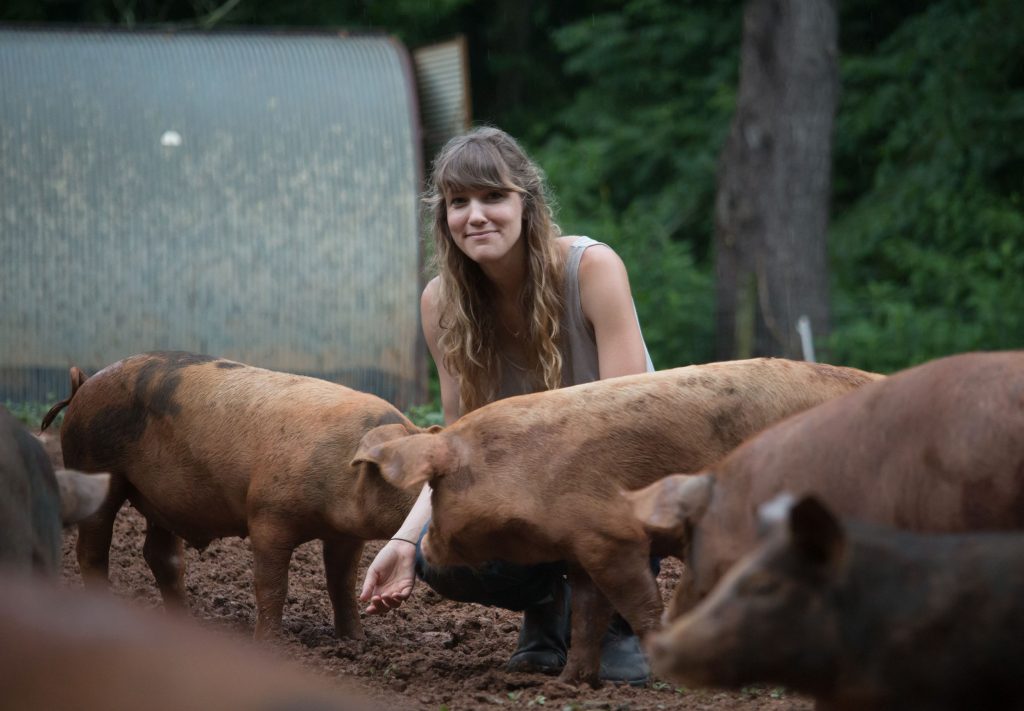 Sarah Blacklin (interdisciplinary studies ’06) admits she couldn’t tell the difference between broccoli and arugula plants when she applied to be a farmhand at Maple Spring Gardens in northwestern Orange County.

She also didn’t have a driver’s license.

“When I got hired, I had to quickly get my license, and I still didn’t tell [owner Ken Dawson] that I had only been driving for two days,” said Blacklin, who was a student at Carolina at the time. “I crashed the truck into the side of his barn the first week.”

Despite that inauspicious beginning, Blacklin’s love for the land and the people who farm it has helped her on her career journey from farmhand to Carrboro Farmer’s Market manager to her present position as program director of NC Choices.

With NC Choices, she focuses on the pasture-based meat industry, working as an advocate and cooperative extension educator for everyone across the supply chain from farmers to chefs. It is a program of the Center for Environmental Farming Systems, a partnership between NC State and N.C. A&T universities and the N.C. Department of Agriculture.

“We work with the farmers who raise the livestock, the processors, the chefs, butchers and whole animal retailers — anyone who’s a player in raising, buying, packaging and preparing meat,” Blacklin said. NC Choices offers educational workshops, technical assistance and strategic networking opportunities to help ensure that each business in the supply chain is making a profit. Although a niche industry, it is growing; today there are about 850 local, sustainable meat farmers in North Carolina.

On any given day, Blacklin spends time on the road, on the farm or in a processing plant.

“Recently, my colleague and I spent three hours in the morning at a farm right outside of Chapel Hill. The farmer wanted to know how to obtain the best feed ratios for optimum nutrition and weight gain for pastured pigs and cattle,” she said.

That afternoon, they visited Left Bank Butchery to discuss “whole animal utilization,” a practice that champions using as much of the animal as possible, cutting down on waste. Then they had a quick lunch at Saxapahaw General Store, where the chef wanted information on finding a specific kind of roasting hen.

Blacklin is also leading the planning for the annual Carolina Meat Conference, which she calls a “huge local meat throw down.” The fall event has become the biggest local pasture-based meat event in the nation and is “a mixture of James Beard chefs and livestock farmers and advocates.”

And NC Choices’ biennial Women Working in the Meat Business seminar — to be held again next year — brings women farmers, butchers and chefs together for two days of workshops at Lantern Restaurant in Chapel Hill. The event was mentioned in a January 2015 article on North Carolina’s “food sisterhood” in The New York Times.

While at UNC, Blacklin took classes in environmental studies and folklore, making connections between science and food activism. She spent six months at a field site in Manteo, learning about wetlands and the fisheries industry. After graduation, she moved to Ocracoke to manage a bed and breakfast and, on the side, to dive deeper into work with local fisheries.

“I took some time to get more coastally rooted, and I really enjoyed that,” she said.

Today, with NC Choices, she sees herself as a “connector,” a skill she traces back to her Carolina education.

“I don’t claim to be an animal scientist,” she said. “I really try to connect people to resources, and that can be applied to any discipline.” She also plans to use that mindset as a member of UNC’s new food theme steering committee.

In her spare time, Blacklin tends to a big garden on her home property, where she and her fiancé grow tomatoes, cucumbers, squash, potatoes, cabbage, beans and sometimes even broccoli.

She no longer has a problem identifying plants.