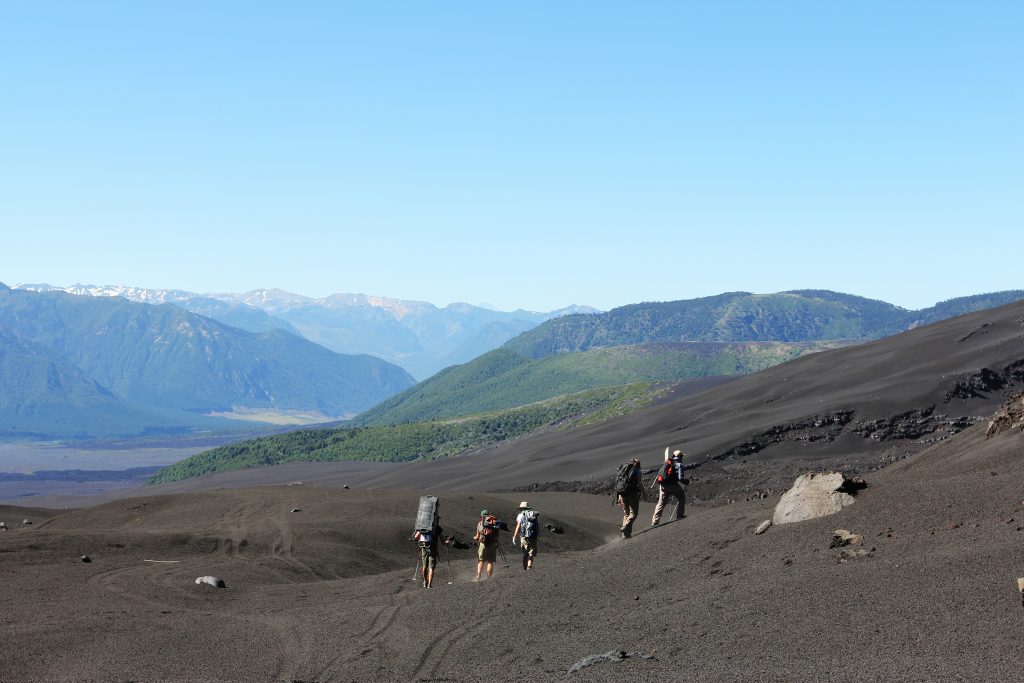 In the small mountain town of Melipeuco, Chile, it is a perfect summer day. Hundreds of people have gathered along the town’s main drag to watch the end of a 70-kilometer bike race. Bikers speed across the finish line to the sound of cheers and applause. Suddenly a different noise pierces through the warm afternoon — a long, low siren emanating from the town’s emergency loudspeaker system.

The siren sounds for 30 seconds, then stops. It does not go off again; it’s only a test. Had the siren sounded twice, it would be time to evacuate the town. This alert exists to warn residents when Llaima Volcano, just 11 miles away, is about to erupt.

Among the crowd are geophysicists, volcanologists and computer scientists from four U.S. universities. They have traveled here to install devices that will provide vital information about the seismic activity on and around the volcano.

Even when a volcano isn’t anywhere near eruption, tiny earthquakes happen regularly.

“Your beating heart is very similar to the little earthquakes happening around a volcano,” said Jonathan Lees, chair of the department of geological sciences in UNC’s College of Arts and Sciences and one of the lead researchers on this expedition. “So imagine you have little monitors tracking your heart rhythms. Suppose you have a heart attack — those monitors could assess the level of stress your heart is under to determine the proper response.”

That is precisely what Lees wants the instruments to do on Llaima: track and analyze the volcano’s activity in real time, including during an eruption. Working with computer scientists from Michigan State University and Georgia State University, Lees hopes to revolutionize volcano monitoring equipment to make it cheaper, more responsive and easier to transport and install. This new seismic technology has the potential to greatly improve the way volcanoes are monitored — and enhance emergency response before and during eruptions.

This is how volcanologists typically collect data: They pack up their equipment and hike to a site on the volcano to install a station, which includes a seismometer, battery and solar panel to power the equipment. The seismometer records the ground’s movements onto a memory card. Four to six months later, the researchers hike back to the spot, download the data and compare it to data collected by other seismometers around the volcano.

At least that’s how it’s supposed to work. “The cost of the equipment is an issue because we may not be able to get it back,” Lees said. “If that volcano erupts and 15 feet of ash falls on top of a station, we’re never getting it back.”

In other words, all the data the seismometer recorded is gone, along with $20,000 worth of equipment. Traditional stations are also heavy; the battery alone weighs about 30 pounds.

“Right now we have three people carrying one station,” Lees said. “In the future, it will be one person carrying four stations.”

The future of seismology is starting here on Llaima. In addition to installing traditional stations, Lees and his team, which includes UNC undergraduate and graduate students, are installing 40 next-generation versions. Each station weighs about 17 pounds and costs about $350. Unlike older station models, the new stations are networked — they talk to one another.

According to Lees, when one of these stations feels a big shake, it reaches out to the others to ask, “Did you guys feel that?” A station can detect all kinds of movements, which might be from animals or even nearby off-road vehicles. If the other stations also pick up the shake, that means it’s an earthquake. They respond to the first station’s query and work together to figure out the exact location of the tremor.

After eight hours of walking, digging and connecting cables along the volcano during a January expedition, the researchers open a laptop. The stations are blinking on the screen, already sending messages to the computer.

Lees compares the system to a brain, with the connections between stations acting like synapses — which makes sense if the volcano is the heart. When the heart starts to beat faster or harder, the brain responds, processing each of those actions.

This batch of stations is just the first generation of the new technology. They will remain on Llaima until mid-April, and team members will remove them before heavy snow accumulates.

Jordan Bishop, a UNC junior geology major, assisted with the installation of Michigan State’s stations. “Each station took about 30 minutes to set up,” Bishop said. “It was cool to see this brand-new technology in the field and to know that it’s something you helped to do.”

The dream, according to Lees, is to one day be able to drop hundreds of these instruments all the over the volcano — from helicopters.

“But you can’t jump from now into the future; you have to go through these steps,” he said. “This is the first big step toward that goal.”

Technicians from the department of geosciences at Boise State University assisted with the transport and installation of stations. The expedition was funded by the National Science Foundation.

View a College Facebook album of more photos from the Chile volcano expedition.