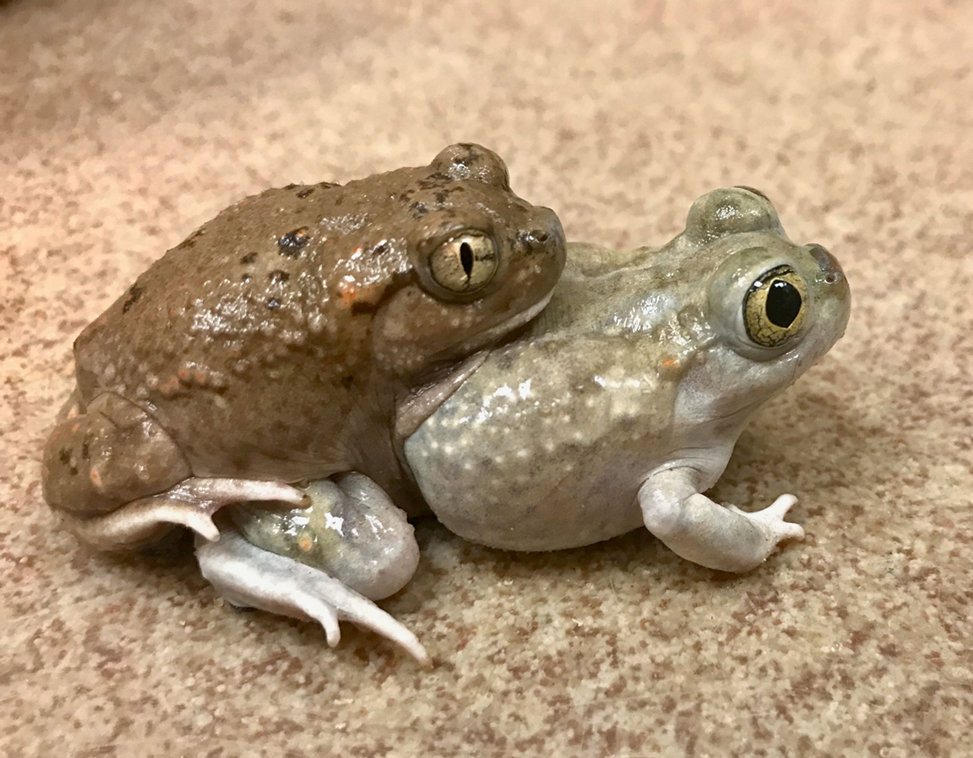 A Mexican spadefoot mates with a plains spadefoot. (photo courtesy of the Pfennigs) 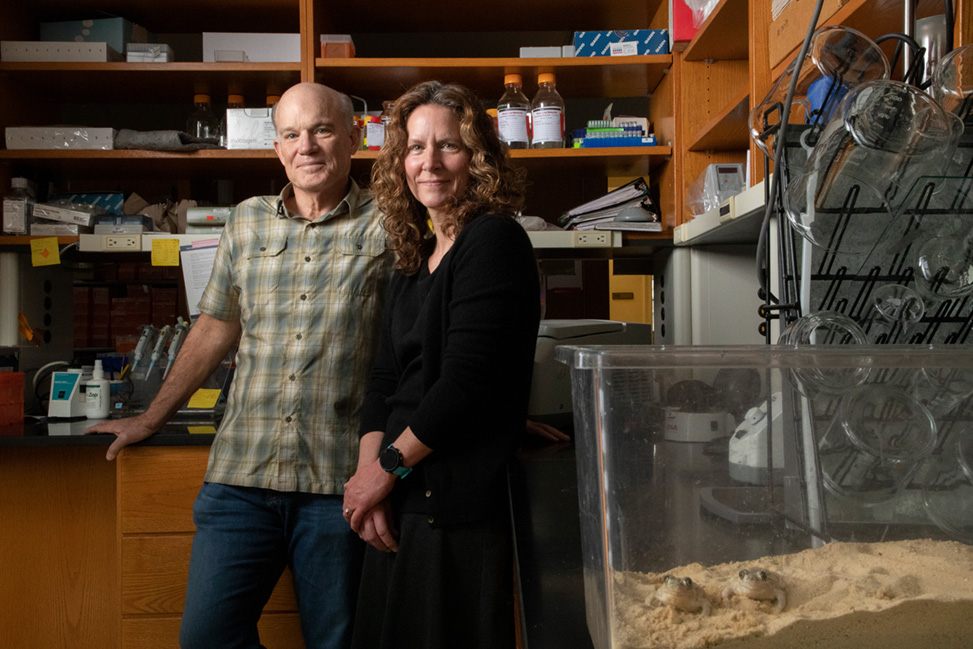 Biologists David and Karin Pfennig have offices at UNC next to each other. They head up separate research groups but collaborate on projects. (photo by Megan May) 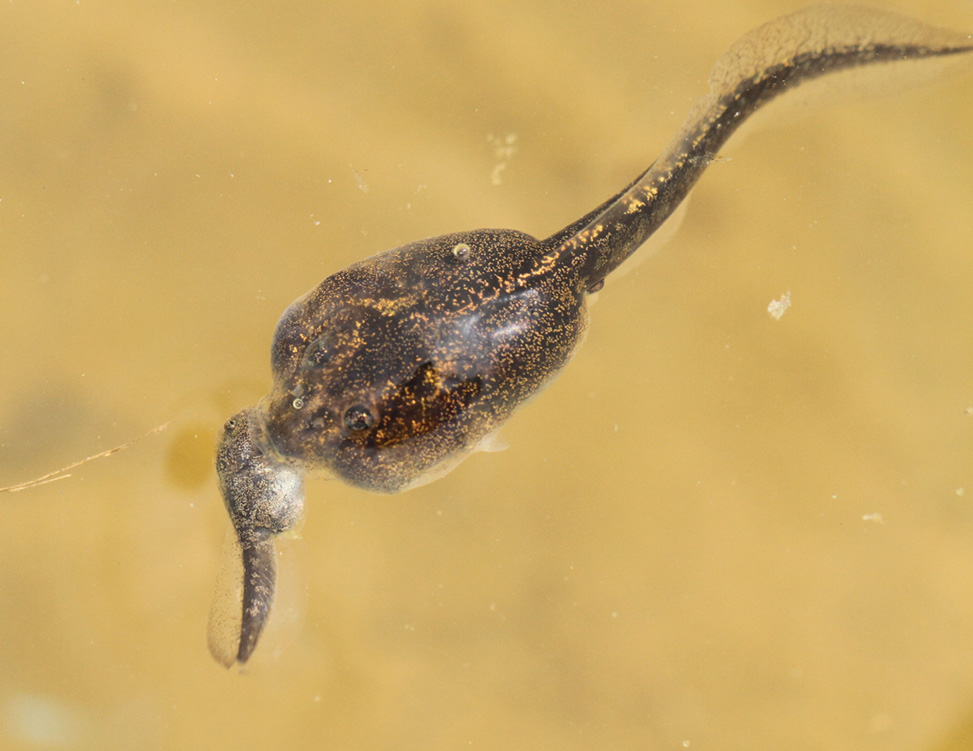 A carnivorous Mexican spadefoot tadpole eats a smaller omnivore tadpole. Carnivorous tadpoles can be two to three times larger than their omnivore counterparts. (photo courtesy of the Pfennigs) 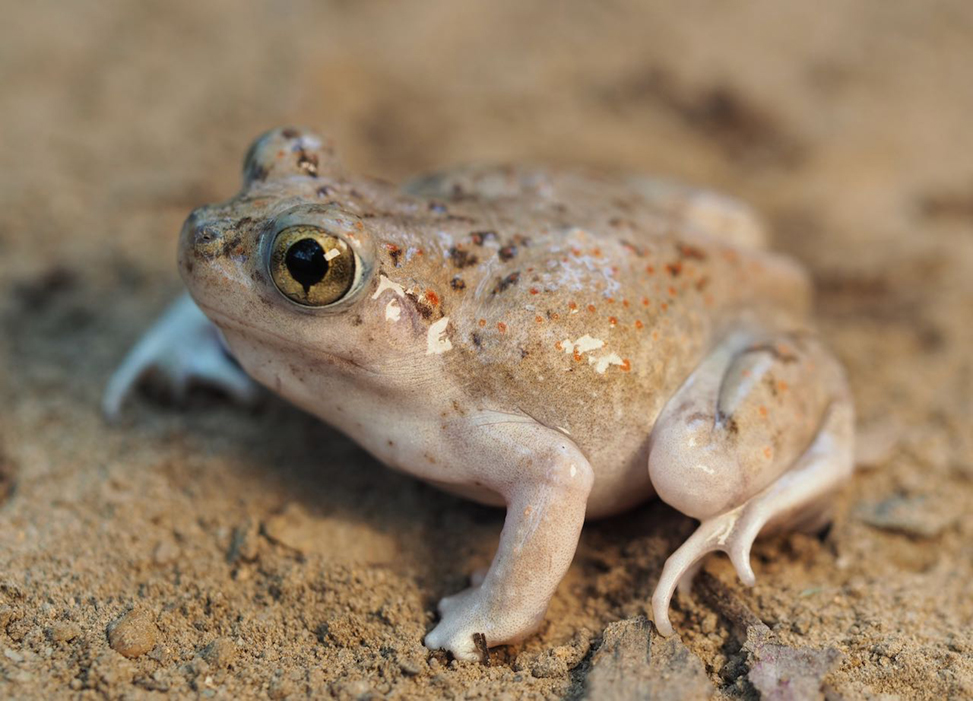 A Mexican spadefoot toad rests on a pond’s shoreline during the Pfennigs’ research trip. (photo courtesy of the Pfennigs)

David and Karin Pfennig have created a home away from home in the Arizona desert. Every summer, the couple conduct fieldwork on spadefoot toads. In addition to the graduate students they bring along, they have a pair of special assistants — their daughters. 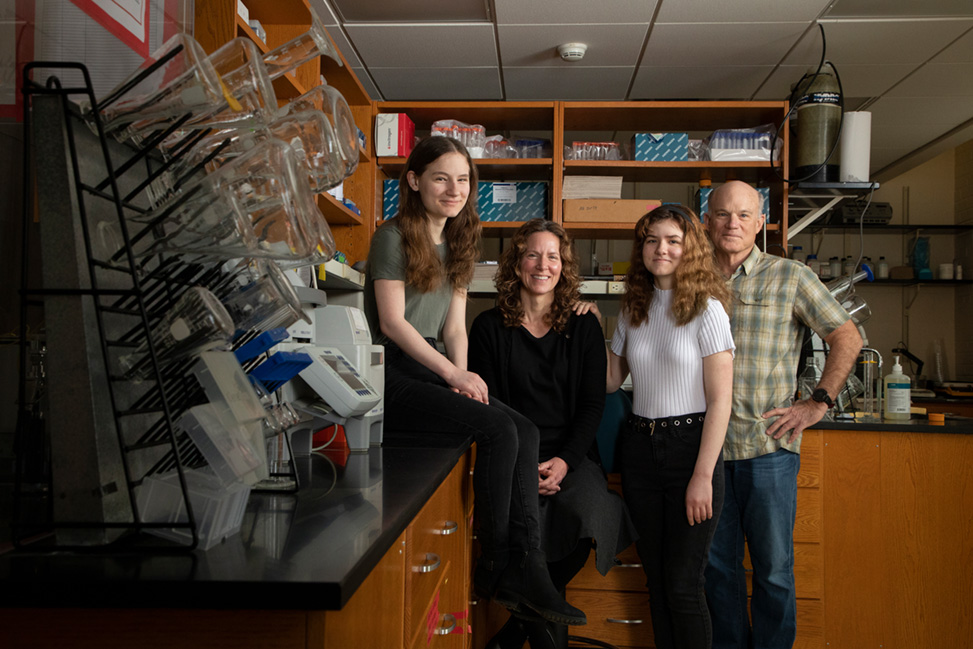 Research is a family affair for Karin and David Pfennig, who often take their daughters Katrina (sitting) and Elsa with them on fieldwork trips to Arizona. (photo by Megan May)

As the school year draws to a close, thousands of families across the country flood airports and highways — off to visit relatives, theme parks and waterways in celebration of the start of summer.

David and Karin Pfennig and their two daughters, Elsa and Katrina, spend three days crossing the country by car in search of more than a little R&R. They’ll spend five weeks in the desert in pursuit of a unique amphibian.

While other families may be soaking up the sun on a crowded beach or exploring tourist spots, the Pfennigs are ankle-deep in a muddy pond — shoes kicked off and tiny nets in hand — just the way they like it.

“It’s really fun,” Karin says. “The girls help with the research and really enjoy it. They come up with their own projects or go out and do their own natural history observations.”

While their younger daughter, Elsa, wants a career incorporating her passion for music, Katrina hopes to follow in her parents’ footsteps in spadefoot research.

“I feel like we’re the luckiest people on the planet to get to work on this and have it be a family thing,” Karin adds. 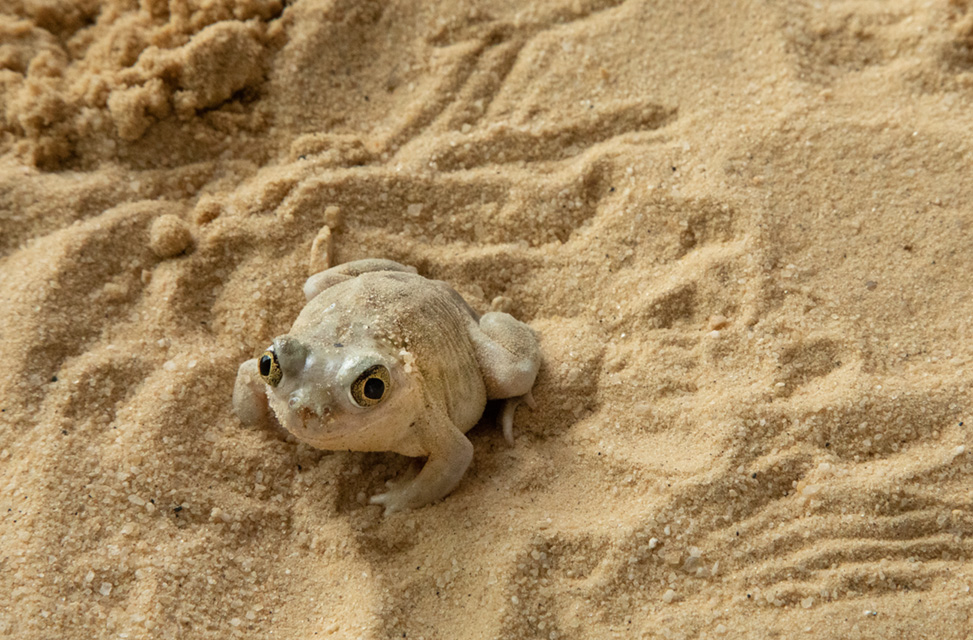 The Pfennigs study spadefoot toads to understand how organisms adapt to extreme and often unpredictable environments. A plains spadefoot is shown here. (photo by Megan May)

For the past 25 years, David and Karin have returned dozens of times to the San Simon Valley in Arizona, where a broad mountain range blends into vast desert plains. Although beautiful, the landscape is too harsh for most organisms. That’s exactly why the Pfennigs are drawn here.

“A lot of times in science if you want to study something, you find a really extreme example,” David says. “It allows you to study it more effectively and then you work out from there.”

Before explaining their research, David wants to get one thing straight — spadefoot toads are not toads at all. They’re frogs. This clarification is important because people think of toads as land-dwellers and frogs near water. So, how does a frog survive in an ecosystem defined by lack of water? They dig.

Spadefoots live underground the majority of their lives to shelter from the dry climate, sweltering sun and extreme temperature fluctuations. A small notch, or spade, on each hind foot enables the spadefoot toads to bury themselves in the desert landscape. Only summer rains bring them out of hiding as shallow depressions fill with water, signaling the start of a night of breeding and the Pfennigs’ fieldwork.

The fact that breeding occurs en masse provides the Pfennigs with insight rarely seen outside the lab.

“It gives us, as scientists, a lot of experimental control and understanding of variables in the natural populations,” Karin says. “We can then go back to the lab and conduct experiments and know they actually reflect what’s going on in the field.”

The Pfennigs study diversity within three types of spadefoots: the Couch’s spadefoot, the Mexican spadefoot and the plains spadefoot.

“The big, overarching theme we try to understand is why the world is as diverse as it is,” Karin says. “Where does diversity come from? How did we get that? And why is it distributed the way it is?”

They have independent research groups that approach that problem differently. David and his research team focus on how the toads’ environment shapes their development, known as plasticity. Karin and her research team study behavior, specifically female mate choice. The Pfennigs’ work has received support from the National Science Foundation and the National Institutes of Health. 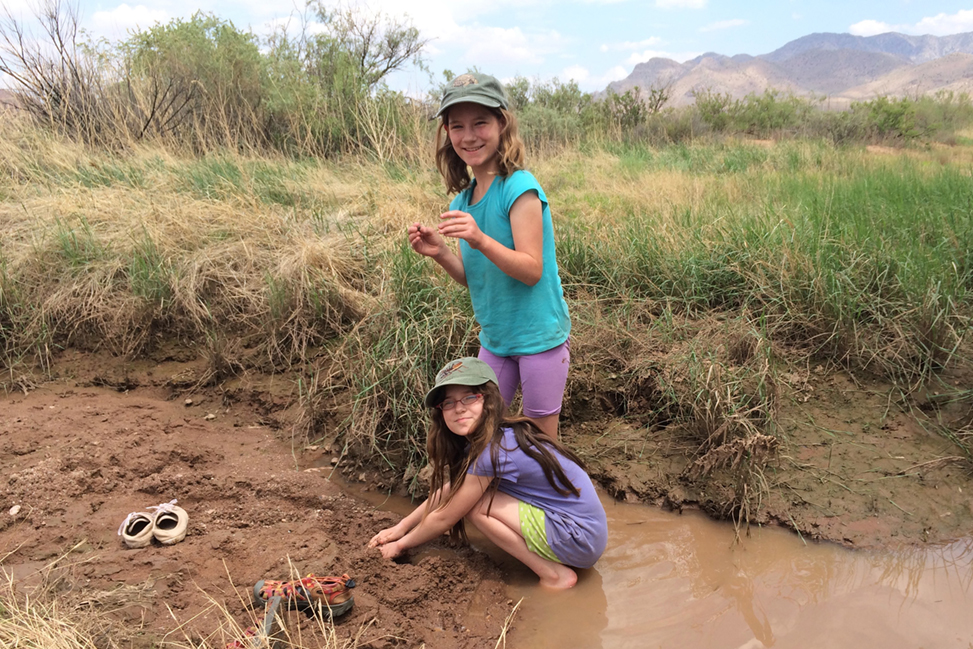 Katrina and Elsa Pfennig “teach” baby toads how to swim during a fieldwork expedition with their parents. (photo courtesy of the Pfennigs)

Water in the desert disappears fast, resulting in the death of thousands of tadpoles that don’t develop quickly enough to survive outside the pond. Karin focuses on a breeding behavior, called hybridization, which can help them avoid this fate.

If the season has been especially dry and the ponds are shallow, a female plains spadefoot will breed with a Mexican spadefoot. Plains spadefoots, found mostly in the Great Plains rather than the desert, take about a month to go from egg to young toad. The Mexican spadefoot, on the other hand, needs only two to three weeks.

Mating with other species that are already adapted to the environment might be a way for invasive species to move into new habitats, Karin explains. In this case, the plains spadefoot basically captures genes of the Mexican spadefoot, enabling them to better adapt to the dry climate.

Today, at least 10% of all animal species are known to hybridize. Just look at humans — Homo sapiens are the product of several human species. When our ancestors migrated out of Africa about 70,000 years ago, they bred with other human species in Eurasia, particularly Neanderthals and Denisovans. This continued our genetic evolution, allowed us to adapt to new environments and produced the modern human. In this way, studying hybridization among spadefoot toads gives insight into our own evolutionary history.

Understanding how and why animals interbreed is also important in an age of ever-changing ecosystems caused by climate change, increased land-use and the spread of invasive species.

“We see what happens when there is long-term drought or rapid changes to the environment impacting these organisms,” Karin says. “We can potentially observe ‘evolution in action,’ which is really striking.”

While Karin’s work centers on mating, David is interested in the product of that mating: tadpoles.

All organisms have traits that are determined not only by their genes but also their environment, known in biology as developmental plasticity.

While most people may think of an organism’s environment as its physical surroundings, a biologist’s definition is much broader. This includes anything that is external to the organism, including diet.

David places a small, cylindrical glass tube on his desk. Inside are tadpoles varying wildly in size — some at least twice if not three times as big as others. Surprisingly, these tadpoles are all about the same age and are of the same species. They may even be siblings. So what accounts for their differences? The smaller tadpoles are omnivores, while the larger ones are carnivores.

“As far as I can tell, this is among the most extreme forms of morphological plasticity that we know of in any organism,” David says, explaining that for years scientists thought the two groups were actually separate species.

The carnivorous tadpoles live life in the fast lane, David explains. Their protein-rich diet speeds their development and allows them to reach metamorphosis and leave the pond earlier than their smaller counterparts. Those differences slow after that point, however — David’s team hasn’t found dramatic disparities between the two groups once they reach adulthood.

“This is a little bit surprising, but, on the other hand, is consistent with theory,” he says. “These are just alternative strategies for achieving the same end.”

All tadpoles start out with an omnivore body form, but some individuals have a genetic predisposition to eat meat and then produce a distinctive, large-headed carnivore body form. In David’s lab, there are tadpoles that are fed one or two shrimp and are completely transformed in this way in their appearance and behavior.

“When you experience different environments, at the mechanistic level different genes are being either turned on or turned off,” David says. “Some of these interactions we now believe are really important for explaining a lot of things in humans that we formally have not been able to explain.”

Take Type 2 diabetes, for example. Some people are more likely to develop the disease due to their genetic makeup, but diet is also a deciding factor. Alzheimer’s disease and cancer are genetic, but environmental cues — like long-term sleep deprivation and exposure to carcinogens, respectively — can reinforce these genetic predispositions.

In the 16 years both Pfennigs have been professors at UNC, they have had ample opportunity for collaboration between their distinct research groups. But they’ve had to tackle unique challenges most science partners don’t face.

“It can sometimes turn personal. I can’t get away from my collaborator if I’m not getting some of my deadlines met,” says Karin, laughing. Not only do they share a household, but their offices at UNC are also next to each other.

The two are currently working on a study examining how the pitch and frequency of a male spadefoot mating call may predict what kind of tadpoles he will produce.

While over two decades of research exploring behavioral and environmental processes of spadefoots have given the Pfennigs an understanding of evolution, there is still much to be learned.

“At the end of Darwin’s life, he said there’s no bigger problem in biology than understanding what causes variation, because you need to have variation for selection to work,” David says. “We still don’t have a complete handle on that.”

For now, the Pfennigs will continue chasing down these answers, one road trip at a time.

Watch an NSF video about the Pfennigs’ research.

By Megan May, a photographer and writer for Endeavors magazine.