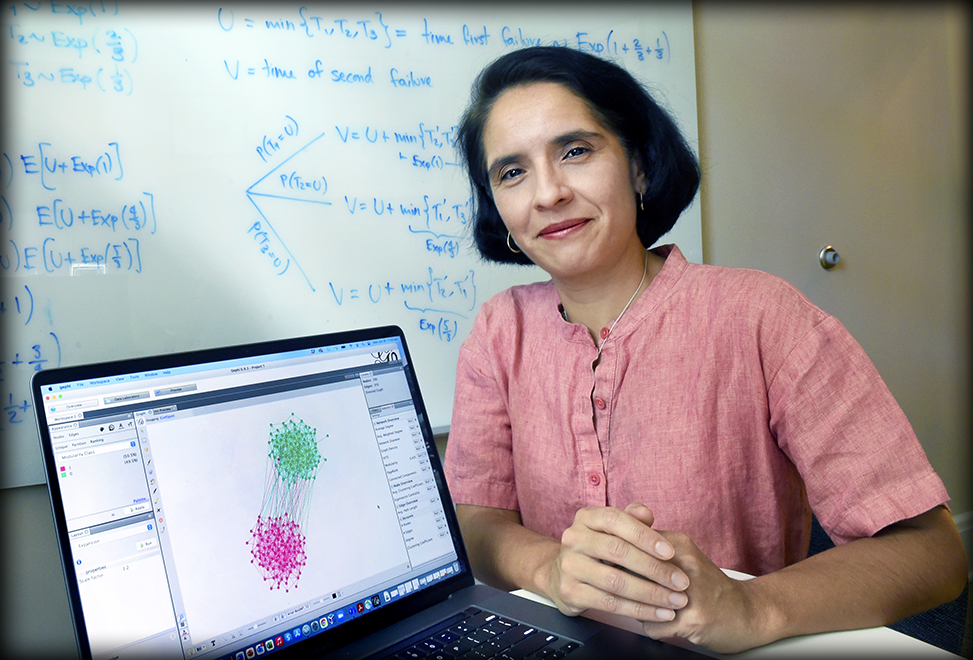 “We need to ensure our students are learning the standard tools to understand and work with data and see patterns,” said Mariana Olvera-Cravioto. (photo by Donn Young)

Seeing patterns in the data

If you type “UNC” into Google, chances are you’ll see a list of links that relate not only to UNC, but also to your personal connection to UNC — whether you’re a student, faculty member or alumnus.

“A set of algorithms operating in the background of your Google search allows this to happen,” said Mariana Olvera-Cravioto, an associate professor in the department of statistics and operations research, or STOR. “In the early ’90s, Google created an algorithm for relevance, and it’s become more and more personalized — now it’s super-personal.”

As social media and internet connectivity become more embedded in daily life, most people are familiar with the concept of algorithms. But the inner workings of why and how they function, and their constant evolution, raise myriad questions for applied probability researchers like Olvera-Cravioto.

“By the time I finish this sentence, a million things will have changed in countless random ways across the internet,” she said. “It’s impossible to capture it exactly.”

To tackle the seemingly impossible challenge of “predicting” patterns online, Olvera-Cravioto and her colleagues use probabilistic models. With these models, they can generate simplified versions of real-world scenarios. Why does one website receive a higher PageRank score than a similar site? What happens if a major server goes down?

“The internet is like a brain — it can create new pathways,” she said. “Even if a few key elements break down, it will find a way to keep functioning.”

Visualizing the complexity of the internet and comparing it to neural networks in the brain comes naturally to Olvera-Cravioto. Growing up in Mexico City, she developed a keen interest in math and science, thanks to both of her parents being doctors. She assumed she would become one, too.

“I always enjoyed talking about biology and medicine, but at some point in high school I realized I didn’t like memorizing things — and there is a lot of that in medicine,” she said.

When she entered college and began studying applied math, she knew she had found her calling. “Math was one of those things that always clicked in my brain. It didn’t matter if I felt tired or uninspired, I could always do it.”

Olvera-Cravioto joined STOR in 2018. Now she is leading the new minor in data science program, which she helped design. The minor launched this fall, and she hopes it will attract students from diverse backgrounds and interests. [See story on the new data science minor in The Scoop on page 33.]

“Many of our students will end up in jobs where at some point they will have a data set of information from which they need to obtain knowledge or discern a pattern,” Olvera-Cravioto said.

“We’re collecting data everywhere all the time,” Olvera-Cravioto noted. “We need to ensure our students are learning the standard tools to start working with it.”

One of the main goals of the minor is to make data science more accessible.

“It’s something that more and more people need to know how to do, and we want students to not feel so intimidated by it,” she said. “They don’t have to be in a STEM major to use data. And who knows, maybe they’ll like it.”