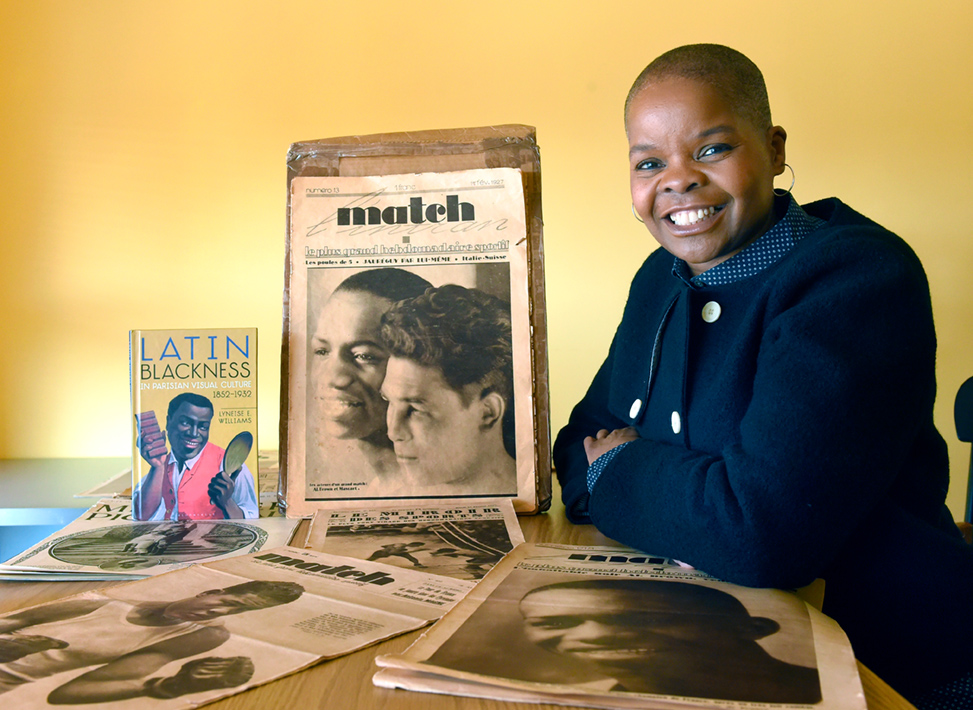 An art historian is leading efforts to inform decision-makers about the historical implications of digital reproduction methods, particularly for people of color.

A stroll Lyneise Williams took through a Paris flea market several years ago ultimately led to an international effort that has the potential to transform the preservation of digitized images.

The 1927 issue of the sports newspaper Match L’Intran Williams bought that day featured a stunning photo of boxer Alfonso Teofilo Brown, the Panamanian World Bantamweight Champion. Nearly a century later, the image was still crisp, well defined and the newsprint was smooth to the touch — unlike today’s newspapers.

Williams, associate professor of art history, came to Carolina in 2004. She studies the representation of people of color in the early 20th century, particularly Latin American people of African ancestry. She had already begun researching Brown for her book Latin Blackness in Parisian Visual Culture, 1852-1932 when she chanced upon his eye-catching photo.

The French publication was produced through a then-new technology called rotogravure in which an entire sheet is laid out using film positives instead of film negatives and then engraved onto a cylinder. In addition, the 1927 paper was finished with a smooth clay coating.

“Rotogravure provides finer detail and more nuanced gray tones,” Williams said. “It was revolutionary in showing people of color because the technology translated all the subtleties of a photograph onto newsprint paper, which the more common, less expensive halftone process couldn’t achieve.”

She wondered whether this was the first time rotogravure had been used to portray a person of color.

She found ads touting the December 31, 1926, anniversary issue and letters to the editor in the following issue about the beauty of the images. Trouble was, Williams couldn’t see what the earlier readers saw because she could view only flat digital images, including those housed at the Library of Congress.

In 1929, the Library of Congress began experimenting with microfilm and ultimately encouraged libraries to use it to free up shelf space. “By 1940, everyone was microfilming their newspapers and getting rid of the hard copies,” Williams said. But the process eliminated the fine details rotogravure had captured.

Seventy years later, the Library of Congress began digitizing the microfilms, which meant those records were now two generations removed from the source material.

“These decisions were made from a practical standpoint, not through the lens of art history or race, and the effect was that the visual historic record of the United States became distorted,” she explained.

Last June, the National Archives and Records Administration announced that beginning in 2023, paper documents would no longer be accepted — only electronic versions — but issued no guidelines. Williams combed through 10 years of the archives’ guidelines and found only technical direction, nothing about visual, social or cultural implications.

So, while in the thick of teaching two fall-semester courses, Williams took action. She created the VERA Collaborative to help inform decision-makers about the historical implications of digital reproduction methods, particularly the effect on portraying people of color. (VERA stands for Visual Electronic Representations in the Archive.)

Already, Williams has garnered the support of the National Park Service, the University Libraries at UNC-Chapel Hill and King’s College London. In fact, the park service asked her to work with computer scientists and engineers to develop a cutting-edge digital asset management system for the archives of the Mary McLeod Bethune Council House National Historic Site.

Williams believes this broad effort embodies exactly what art history does: “Technology used for visual representation includes the values of human beings, even our biases, so we constantly have to navigate those meanings — especially in this visual world.”