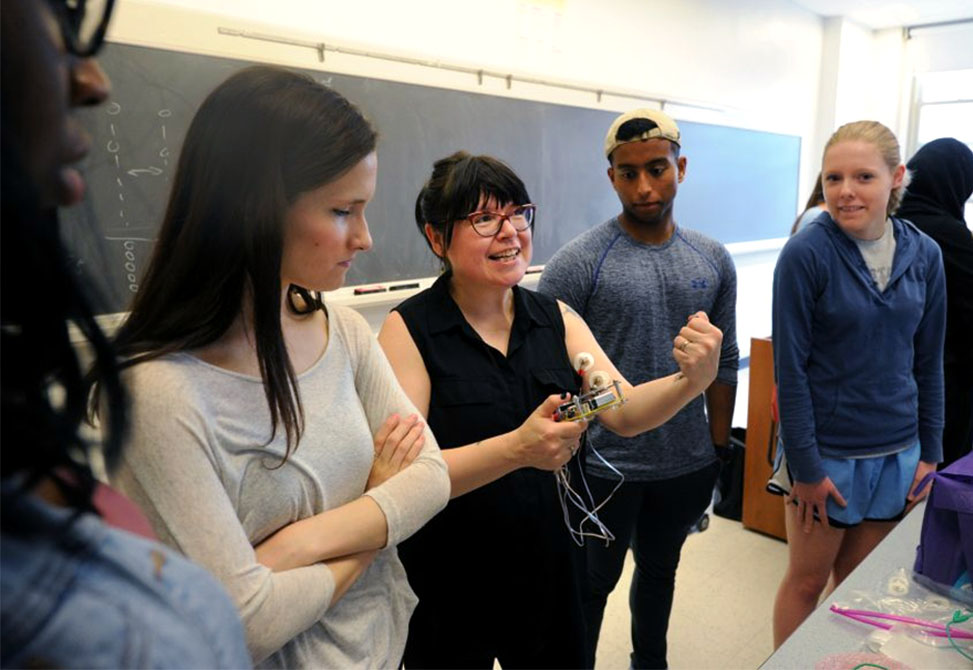 The “escape room in a box” is a briefcase-sized kit of puzzles and challenges designed to help middle-schoolers solve a specific problem: An outbreak of a fictional disease known as “giggluenza” attacks the brain and leads to uncontrollable laughter. As future neuroscientists, they must use hypothesis testing to solve the challenges and unlock layers of clues that lead them to a cure. Penner’s students designed many of the components for the boxes in the BeAM makerspaces.

“The students in that class make very strong connections with each other as they work on in-depth projects together and also help each other find out about lab positions and internships,” Penner said.

Marrero, a Chancellor’s Science Scholar, graduated in May with majors in biology and psychology and a minor in neuroscience. She was a Karen M. Gil Intern at NeuroPlus, a Triangle startup company that uses video-based concentration exercises to help children strengthen their attention skills. This fall, there are even more opportunities for students like Marrero to explore their interests in neuroscience. The College has launched a new interdisciplinary major in neuroscience, drawing on the strengths of 10 academic departments — biology, biomedical engineering, biostatistics, chemistry, computer science, exercise and sport science, mathematics, physics and astronomy, psychology and neuroscience, and statistics and operations research.

“We know that there is great demand for a neuroscience major, and we wanted to better position Carolina to prepare students for future careers in brain science and brain health,” said Dean Kevin Guskiewicz, who is a neuroscientist and nationally recognized expert on sport-related concussions. “Neuroscience will also be a component of our new Institute for Convergent Science, as we bring together researchers from multiple disciplines to solve grand challenges around disease detection and treatment.”

Kelly Giovanello, professor and director of the neuroscience curricula, led an executive advisory committee involving faculty from the 10 academic departments and the School of Medicine’s UNC Neuroscience Center in planning the major. “This began as a grassroots movement among the students,” she said.

In 2009, Giovanello’s then-undergraduate student Amy Abramowitz, who has since graduated from Northwestern University’s medical school, approached her about starting a neuroscience club. The Carolina Neuroscience Club is going strong nine years later and last spring included more than 500 members. The department will continue to offer the neuroscience minor, which began in 2015; 535 students declared the minor last spring, according to numbers provided by the registrar’s office.

“We believe neuroscience studies will provide students with the fundamental knowledge and exposure needed to pursue careers and postgraduate studies in fields related to psychology, human development and aging, health and disease, rehabilitation, biomedical research, human-machine interactions and other emerging disciplines,” Giovanello said. The psychology and neuroscience department has hired two new teaching assistant professors this fall to help meet the demand. Rachel Penton will develop a class in neuropsychopharmacology, a field at the intersection of brain, behavior and therapeutics. Sabrina Robertson will teach a new class in neurotechnology.

“Our goal is to make the neuroscience major at Carolina the best in the country,” Giovanello said. “We have about 115 faculty doing neuroscience work across campus. With the support of our colleagues, we’ll continue to develop new courses to meet the ways in which this interdisciplinary field is growing.”