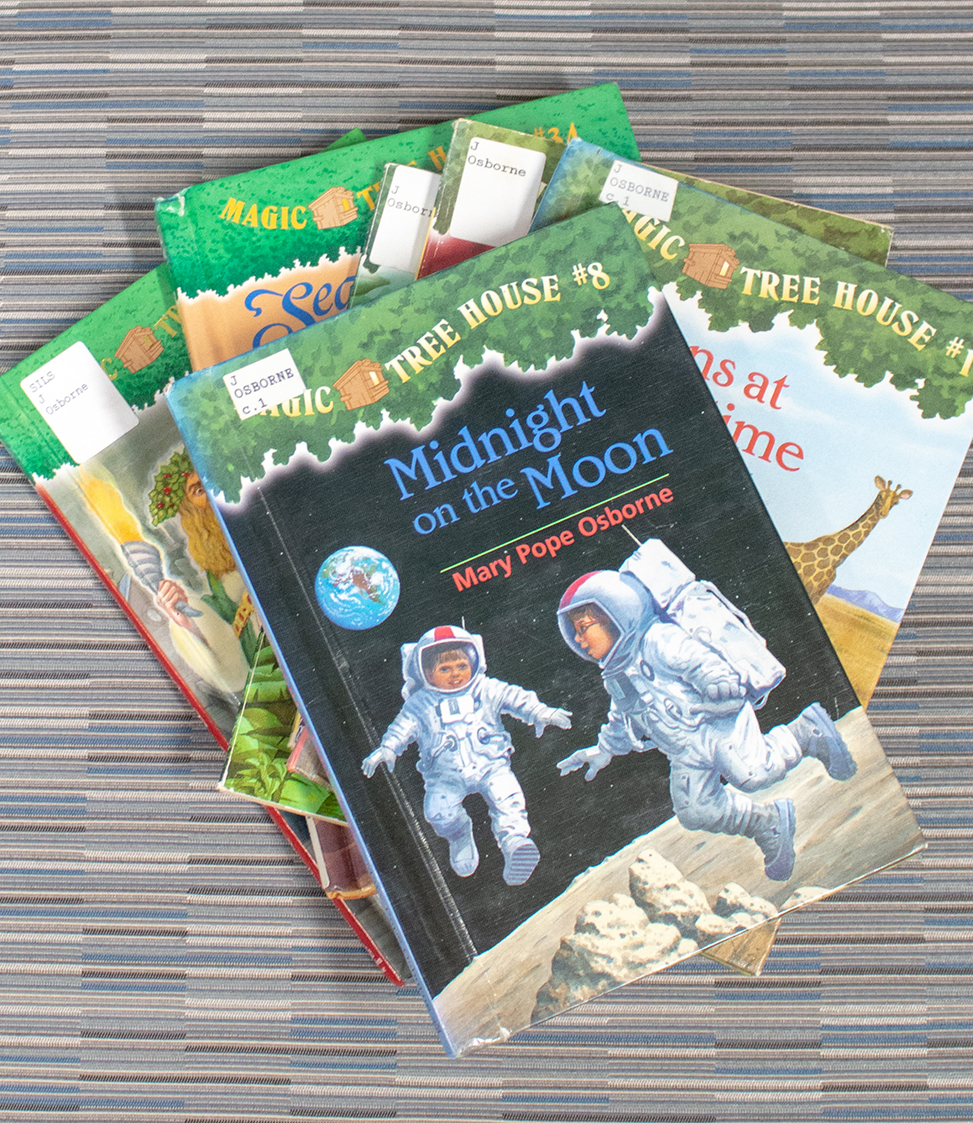 More than 143 million copies of the Magic Tree House books have been sold in 35 languages. Book No. 60 is in the works. (photo by Kristen Chavez) Together Mary Pope Osborne and Will Osborne oversee the Magic Tree House enterprise. A young reader once wrote to them, “If you didn’t [write] the Magic Tree House books, I would go nuts!” Thankfully for their fans, they don’t plan on stopping anytime soon. (photo by Wendy Carlson)

The real magic in the beloved Magic Tree House children’s book series doesn’t involve time travel with brother-sister protagonists Jack and Annie — it’s actually the connection that author Mary Pope Osborne and her husband, Will Osborne, an actor and playwright, have with young readers.

They’ve journeyed together to visit dinosaurs and pirates and mummies and even to the moon. They’ve met famous people like Jackie Robinson and William Shakespeare and Clara Barton.

Mary will publish the 60th book in The New York Times bestselling series next January on whales called narwhals.

The creative duo, who graduated from Carolina in 1971 and now live in Massachusetts, cherish the time they get to spend with their biggest fans. Mary said of her loyal 6- to-8-year-old followers, “We’re there at the sweet spot of life.”

“The irony is when Random House approached me, I was just going to do four Magic Tree House books, but I spent five to seven years visiting schools all over America, and I found a calling,” Mary said. “Since then, whatever role I’m supposed to play, to get kids to love reading became my destiny.” (She’s done that all over the world, as more than 143 million copies have been sold in 35 languages.)

It’s been particularly fun in the last few years when they run into grown-up Magic Tree House readers, Will said — young adults who were first exposed to the books in the early ’90s.

“We can often spot them. We’ll check into a hotel, and we’ll see a likely candidate and ask, ‘By any chance did you happen to read the Magic Tree House books when you were growing up?’ Then Mary will admit she wrote them,” Will said. “It just tickles us to death.”

Despite sharing a love of theater and the same graduation year, the Osbornes barely knew each other when they were students at Carolina. They like to say they were “ships passing in the night.”

Originally a psychology major, Will got interested in theater after a fraternity brother encouraged him to try out for The Taming of the Shrew, and he shifted his major to dramatic art.

Before college, Mary was heavily involved in the Fayetteville theater run by former Carolina Chancellor Holden Thorp’s mother, Bo, and she even babysat Thorp when he was a toddler. She entered UNC intent on majoring in dramatic art, but a class taught by professor emerita Ruel Tyson helped to ignite a great interest in world religions, and she switched to religious studies. After graduation, she backpacked across Europe and Asia for nearly a year.

It wasn’t until four years later that deep Carolina ties would prove serendipitous. Both were in Washington, D.C. Mary was working for the Russian Travel Bureau. Will was starring in the Ford’s Theatre production of Diamond Studs: The Life of Jesse James, written by Carolina alumni Jim Wann and Bland Simpson, who is today a longtime creative writing professor.

“I fell in love from the balcony, and I went backstage and met Will,” Mary said. “They say timing is everything because at that point in our lives, it was an immediate attraction, and we’ve been together ever since.”

Mary said her sister, her two brothers and all of their spouses attended or graduated from Carolina.

“I was telling a friend recently that on that first day of college at Carolina, I wished I would never have to leave,” said Mary, who received an honorary doctor of letters at UNC’s 2013 graduation ceremony and a 1994 Distinguished Alumna Award. “I felt like I had landed in heaven.”

Will launched and co-wrote the Fact Trackers series, nonfiction research companions to Mary’s fiction books, in 2000. After the first eight books, Mary’s sister, Natalie Pope Boyce, took over the nonfiction series, and has authored more than 30 of them. Meanwhile Will has branched out in other interesting creative directions.

Remember the Holden Thorp connection? When Thorp was director of the Morehead Planetarium and Science Center (2001-2005), his young son read the Fact Trackers companion book to Midnight on the Moon and told his dad that it would make a good planetarium show.

Will wrote Magic Tree House: Space Mission, along with several other shows narrated by William Shatner and the late Walter Cronkite. In 1995, the planetarium awarded the Osbornes the Jupiter Award for Outstanding Contributions to Science Education. Space Mission has been among Morehead’s most popular shows since its premiere in 2004 and is now available to other planetariums.

“For a playwright, it was an amazing and challenging experience. You have to write in 180 degrees, which is a wonderful canvas for a writer to paint on,” Will said.

Will also teamed up with best friends Jenny Laird and Randy Courts to write multiple touring musical productions based on the books. The five members of the creative team talked for the first time about their shared work in January at the Normal Rockwell Museum in Stockbridge, Massachusetts.

And let’s not forget the dogs! Joey, Bezo and Little Bear — all 15 years old — are the stars of Mary’s Instagram account.

“They have different handicaps, and we say we’re running an assisted living home for elderly dogs, but we couldn’t love them more,” Mary said.

Mary said she and Will have never had more fun than they’re having right now.

“It’s always an adventure to learn about a new place and to start to live in that setting with my characters. I don’t know if I’ll ever stop writing the series — someone will have to stop me,” she said.

Still, it took lots of hard work and toiling away at their respective crafts in New York City for many years to get to where they are today. “You have to be resilient and willing to fail,” Mary said in offering advice to students hoping to pursue artistic careers. “You have to keep working, keep trying, keep getting better.”

“I tell young writers to write from their hearts. Don’t worry about getting published. Just write, study great writing, learn your craft and love the process. The rest will fall into place,” she said.

“It’s important to expose yourself to other artists in your field so you can discover what you like,” Will added.

“And while it’s good to be passionate about your own projects, don’t be so focused on your work that you leave out life experiences,” he said. “Your work is enriched when you bring those experiences to the stage and the canvas and the page.”