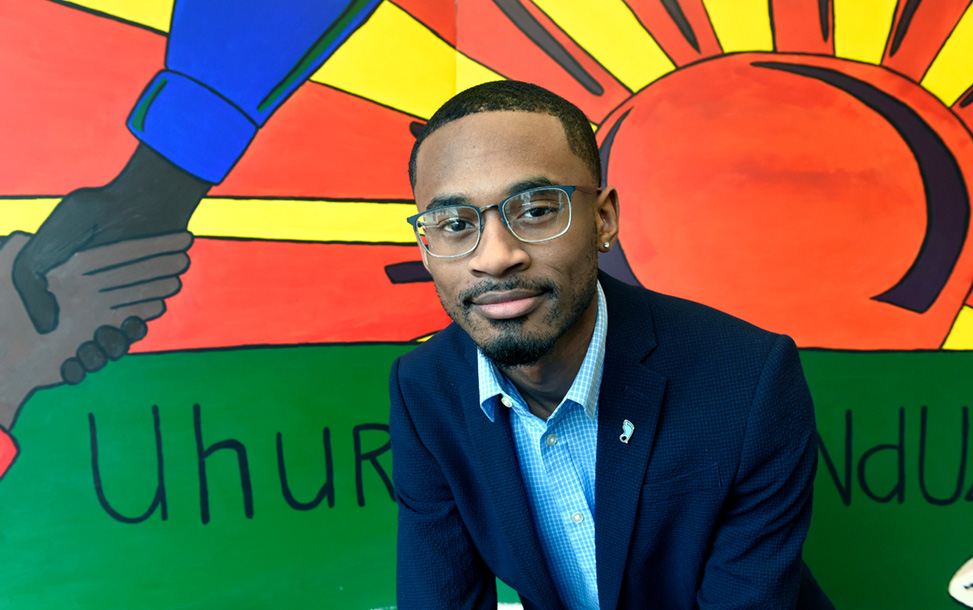 “My primary mission is to make sure that the voices of students are represented,” says Chris Suggs. (photo by Donn Young)

Service is the thread that runs through Chris Suggs’ endeavors, from founding an organization to help teens in his hometown to serving as president of the Black Student Movement at UNC-Chapel Hill.

Chris Suggs was just 14 when he started an organization to help curb youth violence in his North Carolina hometown of Kinston.

Suggs had experienced firsthand the gun and gang violence among teens and wanted to do something to help the city he cares about so much.

“People I knew from the community were either shooting someone or getting shot; it was really disheartening,” he said.

Those challenges led Suggs to start a nonprofit, Kinston Teens, as a platform for young people to get involved in community service. Teens from middle school to college attend city council meetings, plan service projects, participate in mentoring activities and volunteer throughout the city. Suggs and his friends often travel to Kinston on weekends to stay involved with the organization. Since its creation in 2014, the organization has helped more than 3,000 youth participants get involved in the community.

That first entrepreneurial venture would open the door to many other opportunities for the junior religious studies and political science major to continue to serve the state and the Carolina community.

Suggs is in his second term on the Governor’s Crime Commission and is the youngest person to serve in that capacity. With other leaders across the state, he advises the governor and secretary of public safety on criminal justice and law enforcement policies.

Through his experiences serving on that board, Suggs has learned about the complicated nature of government operations.

“I realized that in order for us to really make change in our community and in the state, it takes a partnership between our government officials and community members,” he said.

Suggs also serves on the advisory board for the Task Force on Safer Schools through the North Carolina Department of Public Instruction.

Over the past five years, he has worked with others to develop Say Something, a school safety app where students can anonymously report tips to school administration and law enforcement officials about suspicious activity on campus. The task force is hoping to launch the app in August.

“My primary mission is to make sure that the voices of students are represented when it comes to developing policies and solutions to keep our schools safer,” Suggs said.

Suggs also knew he wanted to make a difference at Carolina.

He serves as president of the Black Student Movement, one of the largest cultural organizations on campus. The organization’s welcoming alumni and student network was among the deciding factors in Suggs’ decision to attend UNC-Chapel Hill.

Suggs said the Black Student Movement has given him a sense of belonging on campus.

“Being president of BSM has been like a full-time job, but I love it,” he said. “It has been an organization that has aligned a lot with the work I do with kids and teens back home in Kinston.”

Suggs, who was also recently elected senior class president, said he is able to manage all of his commitments because he truly values what he does.

“In some capacity, all of my different responsibilities and obligations are related and that just makes it so much easier,” Suggs said. “I have such a strong passion for serving my community, helping other people and being an advocate.

“It doesn’t feel like work. It just feels like I’m doing the right thing because I know this is what I want to do in life.”