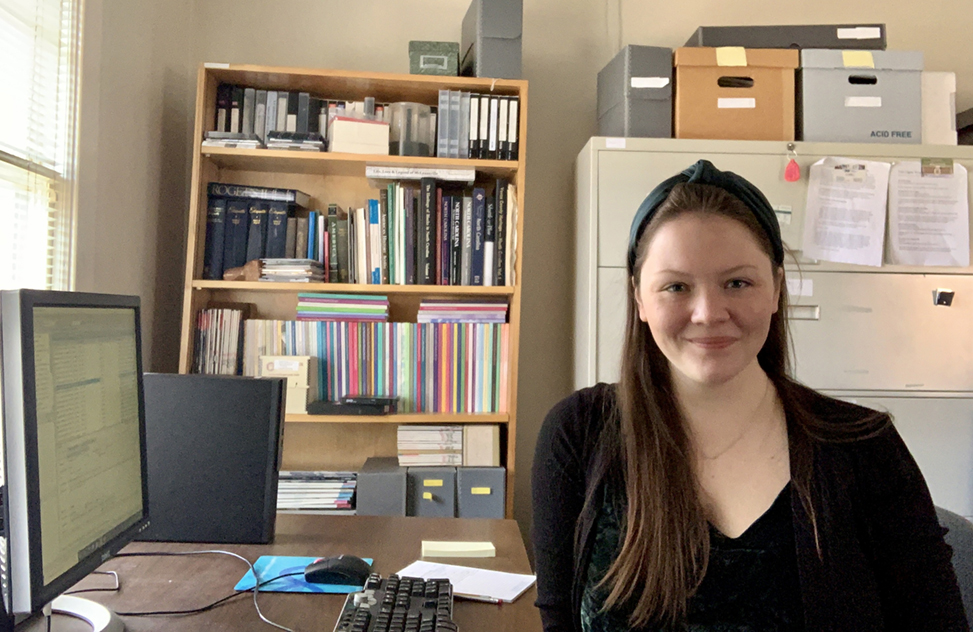 If plants could talk

Sierra Roark seeks to tell a more inclusive history by studying plant remains and the medicinal uses of plants in the South.

Through her archaeological work examining plant remains from hundreds of years ago, Sierra Roark is digging beneath the surface and discovering details about the lives of often marginalized groups and the signs of resiliency and ingenuity often left out of history books.

“Plants are an integral part of life,” said Roark (M.A. ’20), a Ph.D. student in anthropology. “They provide everything from food to medicine to the clothes we wear. And they played a huge role in Colonial America and how the English and the other colonies found fortune and the ability to be sustainable.”

For her master’s thesis, Roark studied plant remains to try to understand how Siouan-speaking peoples used plants before and during the colonial period when Europeans arrived in the Piedmont region of North Carolina and Virginia. In addition to scientifically examining the remains, Roark used historical documents and social theory to help interpret what she found and to better understand people’s relationships with plants and artifacts.

A common narrative among historians is that the Native American population was drastically affected by diseases such as smallpox, influenza, yellow fever and measles that came over with the colonists. Roark subscribes to a different theory that suggests the decline was more often caused by warfare and enslavement by colonists, captivity by other Native American groups and land encroachment that led to food scarcity.

In other research, Roark has found evidence that suggests Native Americans were industrious and creative about using plants to treat symptoms and address disease. Sumac bark and roots were used as a dermatological aid, dental aid and cough medicine. The leaves and seeds of jimsonweed (also known as thorn apple or devil’s snare) were used to treat skin ailments, wounds and congestion. And while tobacco was smoked, it also was used to fight intestinal worms, and as an antispasmodic and cathartic aid.

Roark chose Carolina because it was one of a few programs that specializes in paleoethnobotany. Kandace D. Hollenbach, her adviser and a faculty member at the University of Tennessee where Roark received her B.A. in history and anthropology, is a Carolina Ph.D. alumna. Hollenbach highly recommended the program.

As a Charlotte Hawkins Brown Public History fellow, Roark is preparing an exhibit for the Charlotte Hawkins Brown Museum in Gibsonville, North Carolina, that will look at African American medicinal practices in the American South and how plants were used for folk healing. The fellowship is part of the Humanities for the Public Good initiative, a program funded with support from the Andrew W. Mellon Foundation.

After she receives her doctorate, the Flat Rock, North Carolina, native hopes to stay in academia or do public outreach for a museum and continue helping people look more closely at history.

“That’s one of the things I really like about archaeology,” said Roark, who also enjoys hiking and horror movies. “It’s not just the people who wrote records that we’re studying. It’s everyone who lived in that space, so archaeology allows us to create a more equitable picture of the past.”

Everything becomes real as she sifts through dirt. And looking at a plant under a microscope, she speculates that the corn before her eyes is from somebody who struggled to get enough sustenance a couple hundred years ago: “That’s when it kind of clicks and I realize that this is something that very few people get to interact with like we do.”

In the end, Roark doesn’t want to erase history, just make it more accurate. Given the recently charged political climate, she’s saddened and frustrated by people who get upset when scholars challenge the narrative that they grew up with.

“The reality is those views fit a narrative of American exceptionalism,” Roark said. “And that’s just not how it went.”