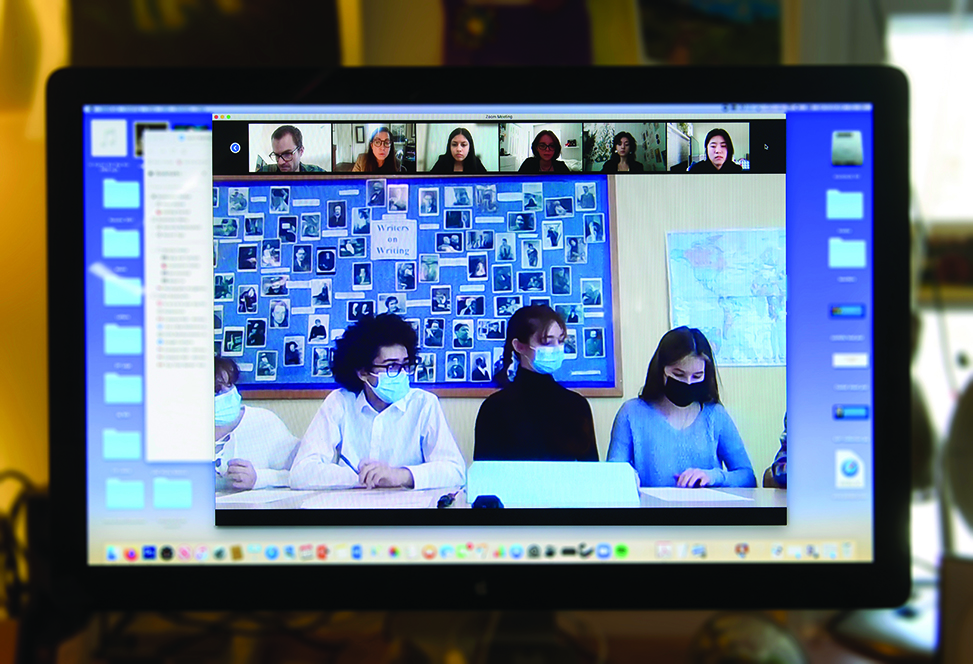 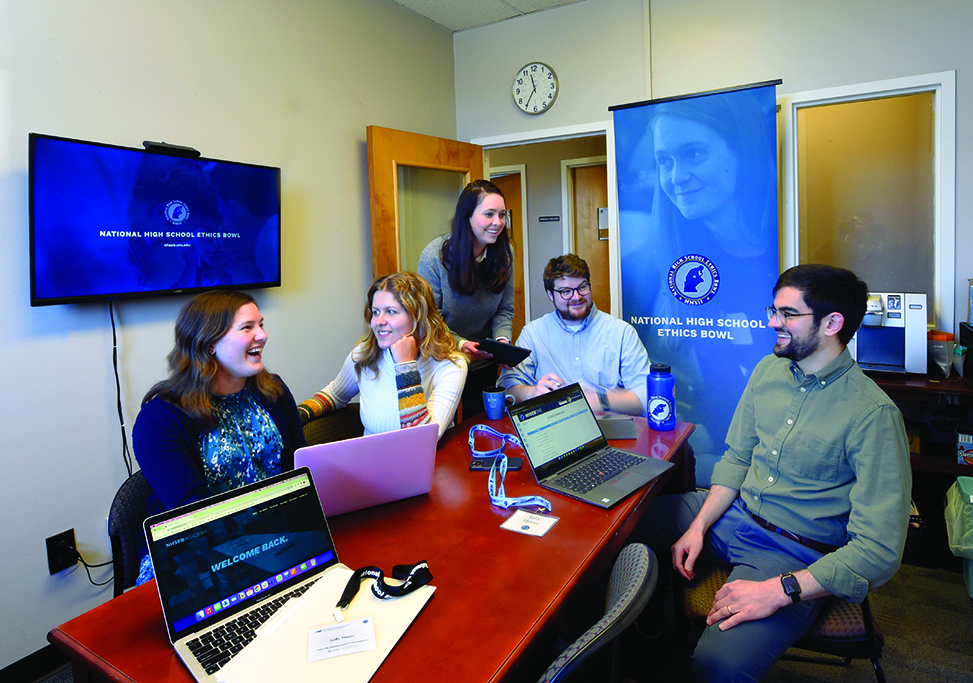 A space to talk about hard things

The award-winning National High School Ethics Bowl teaches students how to thoughtfully engage with divisive topics — and with one another.

Is it OK to “ghost” someone you’ve been dating? What is the value of objectivity in journalism? How should government officials communicate information about COVID-19?

These questions are just a few of the topics presented to students during the National High School Ethics Bowl (NHSEB), a program that hosts regional bowls and then a national event each April in which teams discuss real-life ethical issues. The program is part of the Parr Center for Ethics in the department of philosophy.

Unlike traditional high school debate clubs, NHSEB participants do not focus on winning an argument. Rather, judges give students a score based on the clarity and quality of their reasoning.

“Combative, antagonistic debate doesn’t get us very far,” said Alex Richardson, director of the program. “Students are evaluated on the ways they engage with each other. Are the conversations respectful and constructive?”

Delaney Thull, a graduate assistant working with the program, recalled the first time she participated in the competition as a judge and the impression it left on her.

“I remember thinking ‘Wow, these students are handling things with so much grace and respect,’” she said. “Our country needs more of that skill set — where you can have strong disagreements and still walk away with mutual respect and admiration.”

Thull sees the ethics bowl as a space for young people to come together and talk about difficult subjects.

“It’s amazing to see American teenagers having hard conversations about topics that most adults aren’t willing to touch,” she said.

To participate in those hard conversations, teenagers must feel empowered. As the Parr Center began conceptualizing the NHSEB back in 2012, the staff worked to create rules and guidelines that would encourage high school students to feel confident and respected. 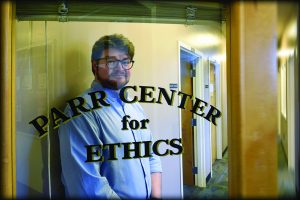 “College students are accustomed to being treated as fully evolved and informed members of society, but high school students are often talked down to — as if they don’t have the agency to understand complex societal problems,” Richardson said.

The Parr Center staff designed the ethics bowl events to change that mentality.

“We can teach them what it means to have productive discussions about fundamental moral and political issues in a way that is not derailed by disagreement but is actually improved by it,” he added.

During its inaugural year (2012-2013), NHSEB oversaw 11 regional competitions with about 1,000 students participating.

In 2021, the program hosted 40 regional competitions across 32 states, with nearly 4,000 students from 350 schools taking part.

“For a program that is less than 10 years old, it’s grown like wildfire,” said Richardson, who joined the Parr Center as director in fall 2019.

“Just when I got up to speed, everything changed,” Richardson said, referring to the start of the COVID-19 pandemic. “But I think what we are teaching students is more important than it has ever been.”

When COVID-19 canceled plans for the annual April event in spring 2020, Richardson and his team surveyed their constituents — students, teachers, judges and volunteers. The response was overwhelming: Please keep the NHSEB going.

In their feedback, the teachers were quick to vouch for the ethics bowl’s value, both academically and socially.

As for the students, “over and over again, we heard students say, ‘I would miss the community building and networking that this activity provides for me,’” Richardson said.

The team spent summer 2020 figuring out how to move the event online for the next season and how to keep the dynamics that made the in-person events so successful. First: Keep the competition alive and lively. What does it take to make the ethics bowl happen if the students and judges cannot be in the same room? The team partnered with Enable Education, a technology firm, that designed web-based software to overcome this hurdle.

In January 2021, they rolled out the NHSEBOne competition platform to aid in the administration of regional competitions.

Just a few weeks after its activation, NHSEBOne was used to conduct over 30 events. Over the course of the year, 85 percent of the regional competitions adopted the platform. By the end of the 2021 season, 38 events were conducted on a platform that did not exist six months earlier.

The team worked hard to develop other tools as well, broadening the scope of the program throughout the pandemic.

They saw early success with NHSEBBridge, an online-only competition tailor-made for teams in their first year of involvement with the activity. Recruiting for this program in 2020 focused on schools and students from underserved communities.

This past October, they relaunched the most popular new program from 2020, NHSEBAcademy, which allows students to receive coaching assistance and mentorship. Students can go to the website to schedule a consultation, brainstorming session or practice a Q&A with an undergraduate student at UNC. They can even pair with other teams for practice scrimmages with a new initiative called The Stadium.

“It turns out that what we needed to do to respond to COVID-19 worked well with the goals of our five-year strategic plan,” Richardson said.

“A five-year plan quickly became a five-month plan,” he added.

The hard work and long hours paid off. In December, the team was awarded the prestigious Prize for Excellence and Innovation in Philosophy Programs by the American Philosophical Association. The selection committee praised the team for its response to the challenges faced by the pandemic and cited the program as “evidence of philosophers doing their best work in a public forum to advance the public good.”

Using ethics in the real world

Lauren Haines saw a flyer for the National High School Ethics Bowl during her first year of high school. After attending the initial meeting, she was hooked — she participated in the event all four years of high school. When she came to UNC in 2019, she continued to be involved as a mentor for the NHSEB.

“I think the social aspect of the ethics bowl is so valuable,” Haines said. “It teaches students how to argue in an accessible way and how to approach people who might disagree with you.”

In addition to teaching solid communication skills, Haines said, the program has exposed her to topics she may not have encountered otherwise.

“We’ve had several cases that dealt with ethical dilemmas in medicine,” she said. “It helps students communicate across disciplines.”

Haines says involvement in the program helped her learn how to translate scientific jargon into language that is clearer for a broader audience — which helped her land a part-time job while still in college.

“I write for an artificial intelligence and data science company now,” she said. “I don’t think I’d be able to do it if I didn’t have that language practice from the ethics bowl.”

As the pandemic continues to complicate event planning, the ethics bowl team continues to adapt. The Parr Center planned to host the North Carolina Regional Ethics Bowl on the UNC campus at the end of January. But when concerns about the omicron variant emerged, Richardson started making contingency plans.

He and the team ended up switching to a virtual event for the regional bowl instead of bringing hundreds of students to campus.

“That decision was disappointing, but we received a lot of emails from people who were relieved,” Richardson said.

Having a reliable technological infrastructure in place made a last-minute pivot to an online event much more feasible. While some of the social aspects are lost, Richardson believes the most important components are present in both formats.

“We have built a strong alternative platform that enables us to keep much of what matters not only intact, but consistent,” he said.

Thull, the graduate student, said taking ethics out of the classroom and into the real world helps students see that it’s not just an abstract thing.

“It’s not just for philosophy nerds,” she said. “This approach touches all of our lives in deep, meaningful, personal ways.”