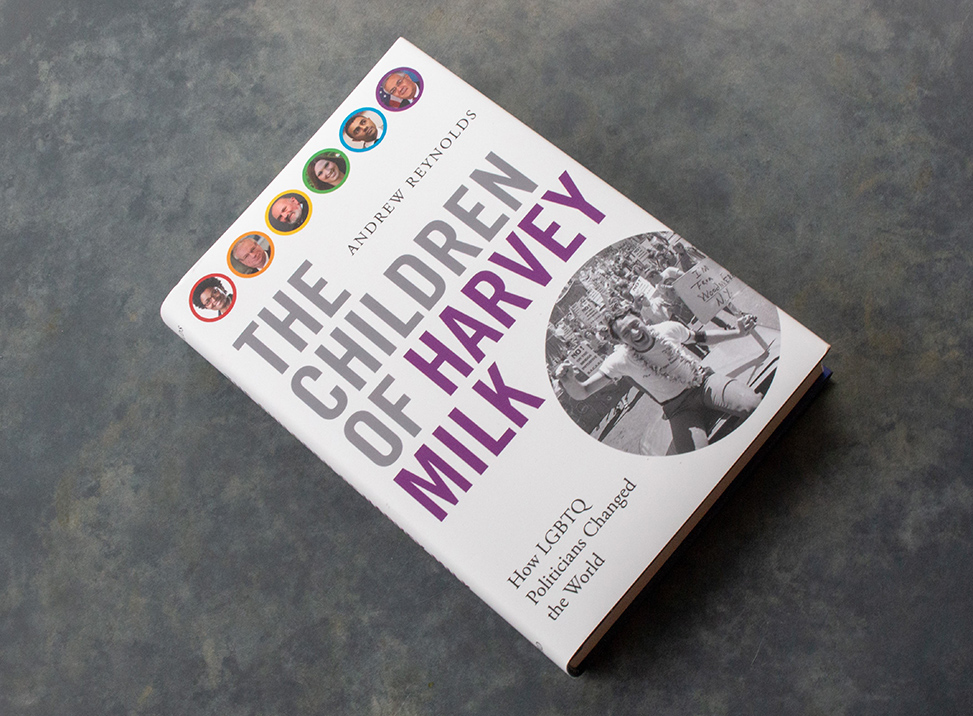 When Harvey Milk won a seat on the San Francisco Board of Supervisors in 1977, the needle on LGBTQ rights began to move. Milk, one of the first openly gay elected officials in the country, brought a recognizable face and passionate voice to a once-faceless issue.

As Milk spoke frankly about his experience with hostility and discrimination, people began to grasp the true, very personal impact of homophobia. By injecting his personal narrative into the issue of gay rights, Milk broke down the barriers between “us” and “them” and opened the door to understanding — and eventually to substantive political action.

Andrew Reynolds explores the power of individuals like Milk in effecting social change and, in turn, public policy, in The Children of Harvey Milk: How LGBTQ Politicians Changed the World (Oxford University Press, 2018). Through the compelling personal stories of LGBTQ politicians worldwide, from the United States to the United Kingdom and Africa to Australia, the UNC professor of political science traces the major breakthroughs of the gay rights movement over the past 40 years.

“On the surface, the book looks like it’s about politics, legislation and elections,” Reynolds said. “But my view is that once you get into it, you realize the book is about love — both big love and smaller love.”

Love and the fight for marriage equality are at the center of the book, but it isn’t only romantic or partnership love, he added, it’s general appreciation and respect between individuals.

That’s the smaller love: friendship between colleagues; respect and empathy that develops between legislators who sit across from one another; strength gained from seeing someone like you in a position of responsibility.

Milk was not the first openly gay official. In the United States, Jerry DeGrieck and Nancy Wechsler came out together in 1973 when serving on the Ann Arbor City Council. Abroad, James “Coos” Huijsen, who had been in Dutch Parliament in 1972-73, came out publicly before running again in 1976 and being elected.

Milk, however, was an outspoken advocate that gay people needed to be an integral part of the political discussion.

Within the past two decades, acceptance has increased considerably. Before 1990, the majority of LGBTQ officials came out after they had been elected, Reynolds’ research shows, but since 2000, most have been out when they were elected. Between 1976 and the beginning of 2019, 341 openly LGBTQ representatives have been elected to national parliaments in 48 countries, with more than 200 currently in office.

Coming out is key, Reynolds believes.

Barney Frank, the former 16-term congressman from Massachusetts, is a prime example. He did not want to be known as the gay politician, but as the first member of Congress to voluntarily come out as gay, he understood that he had that important voice in the room.

In January, Reynolds met Ahmad Zahra, who had just been elected to the Fullerton City Council in historically conservative Orange County, California. Zahra, a Syrian-American married to a Mexican man, is the first out gay Muslim elected anywhere in the world, Reynolds said.

Zahra worked in the school system and knocked on doors in his district, and in the process made friends with the community. “To them, he isn’t a Syrian or a refugee, he’s just Ahmad, who does school drives and works on local issues,” Reynolds explained.

During his campaign, Zahra went door to door with Lisa Middleton, a member of the Palm Springs City Council and one of the only openly transgender women in office in America. “People fell in love with this incredibly unusual team who you would expect to be demonized in such a conservative area,” Reynolds said.

All of these stories show how visibility breeds empathy. The goal, Reynolds said, is to get to a “state of grace” where we see the person, not the label.