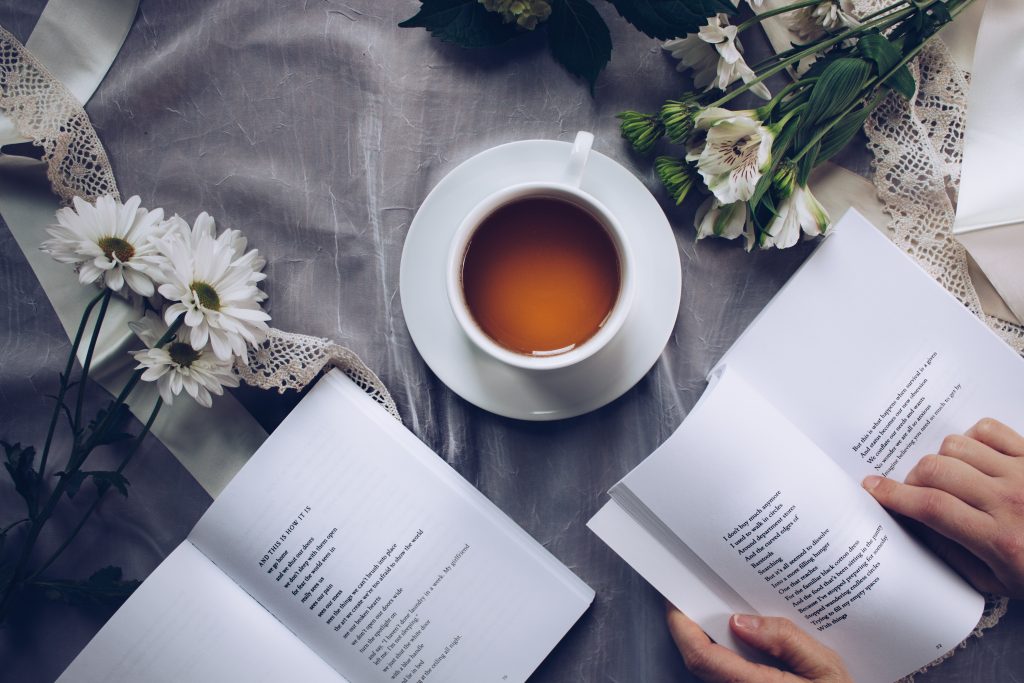 The Triumph of Christianity: How a Forbidden Religion Swept the World (Simon & Schuster, February 2018) by Bart D. Ehrman, James A. Gray Distinguished Professor of Religious Studies. From the New York Times bestselling authority on early Christianity comes the story of how Christianity grew from a religion of 20 or so peasants in rural Galilee to the dominant religion in the West in less than 400 years. Ehrman shows how a religion whose first believers were 20 or so illiterate day laborers in a remote part of the empire became the official religion of Rome, converting some 30 million people in just four centuries. Newsday writes: [Ehrman] doesn’t tell us what to think. He gives us a lot to think about.” Listen to an NPR “Fresh Air” interview with Ehrman. Search and Rescue (LSU Press, March 2018) by Michael Chitwood, lecturer of creative writing. In his new poetry collection, Chitwood seeks what the pagan Celts called the thin places, the spots where otherworldliness bleeds into the everyday. Beginning with childhood, the poet meditates on the intersection of the sacred and secular, on those luminous moments we can only partially understand. Water anchors the collection with the title poem, which explores the history of a large manmade lake and how it changes the surrounding mountain community. The book won the 2018 L. E. Hillabaum Poetry Award.

Building the American Republic, Volume I: A Narrative History to 1877 (The University of Chicago Press) by Harry Watson, Atlanta Alumni Distinguished Professor of Southern Culture. A Narrative History to 1877 runs from pre-Colonialism to the Civil War and Reconstruction. A second volume, A Narrative History from 1877 (by Jane Dailey), carries the story through the 2016 election. Taking a deliberately multifaceted and inclusive stance, the authors tell a stimulating story that will lead to a deeper understanding of America’s past and present.

Appointed Rounds: Essays (Mercer University Press, February 2018) by Michael McFee, professor of creative writing. McFee’s new book takes its title from the unofficial motto of the U.S. Postal Service: “Neither snow nor rain nor heat nor gloom of night stays these couriers from the swift completion of their appointed rounds.” All of us have appointed rounds in our lives — essential things we are given to do and must try to complete, whatever the inner or outer weather, whenever the time of day or night. This lively and wide-ranging collection of 50 essays addresses McFee’s appointed rounds, subjects he has been thinking and caring about for decades.

Louis Austin and the Carolina Times: A Life in the Long Black Freedom Struggle (UNC Press, February 2018) by Jerry Gershenhorn (Ph.D. history ’00). Austin (1898–1971) came of age at the nadir of the Jim Crow era and became a transformative leader of the long black freedom struggle in North Carolina. From 1927 to 1971, he published and edited the Carolina Times, the preeminent black newspaper in the state. He used the power of the press to voice the anger of black Carolinians and to turn that anger into action in a 40-year crusade for freedom.

Print News and Raise Hell: The Daily Tar Heel and the Evolution of a Modern University (UNC Press, February 2018) by Kenneth Joel Zogry (M.A. history ’97, Ph.D. history ’08). For over 125 years, the Daily Tar Heel has chronicled life at UNC-Chapel Hill and at times pushed and prodded the university community on issues of local, state and national significance. Thousands of

students have served on its staff, many of whom have gone on to prominent careers in journalism and other influential fields. Print News and Raise Hell engagingly narrates the story of the newspaper’s development and the contributions of many of the people associated with it. Wilson Library complements Zogry’s book with an exhibition titled “The Truth in Eight-Point Type: The Daily Tar Heel Celebrates 125 Years of Editorial Freedom” April 10-July 31.

Lands of Lost Borders: Out of Bounds on the Silk Road (HarperCollins, August 2018) by Kate Harris (biology ’05, minor in geology). As a teenager, Harris realized that the career she craved was to be an explorer. In between studying at Oxford and MIT, she set off by bicycle down the fabled Silk Road with her childhood friend Mel. Pedaling mile upon mile in some of the remotest places on earth, she realized that an explorer, in any day and age, is the kind of person who refuses to live between the lines. Read about Harris and her new book in The Globe and Mail. The Designs of William Ivey Long (USITT, spring 2018) by Bobbi Owen, Michael R. McVaugh Distinguished Professor of Dramatic Art. The monograph on the career of William Ivey Long is the 12th in USITT’s series documenting the work of America’s best theatrical designers. Long has designed costumes for over 70 Broadway shows — one of which, Chicago, is the longest-running American musical with more than 9,000 performances (and counting) over 21 years. He has been nominated for 15 Tony Awards, winning six times. More than 100 illustrations are included, among them renderings of Long’s exquisite costume designs and photographs from some of his award-winning productions.

Promise (William Morrow/HarperCollins February 2018) by English professor emerita Minrose Gwin. In the aftermath of a devastating tornado that rips through the town of Tupelo, Mississippi, at the height of the Great Depression, two women worlds apart—one black, one white; one a great-grandmother, the other a teenager — fight for their families’ survival in this lyrical and powerful novel. Drawing on historical events, Gwin beautifully imagines natural and human destruction in the deep South of the 1930s through the experiences of two remarkable women whose lives are indelibly connected by forces beyond their control. Of Friends and Foes: Reputation and Learning in International Politics (Oxford University Press, spring 2018) by Mark Crescenzi, Bowman and Gordon Gray Professor and chair, department of political science. How do countries form reputations? Do these reputations affect interstate politics in the global arena? Reputations abound in world politics, but we know little about how state reputations form and how they evolve over time. In this book, Crescenzi develops a theory of reputation dynamics to help identify when reputations form in ways that affect world politics, both in the realms of international conflict and cooperation.

Our Higher Calling: Rebuilding the Partnership Between America and its Colleges and Universities (UNC Press, September 2018) by Holden Thorp, provost at Washington University in St. Louis (and former chancellor of UNC-Chapel Hill and dean of the College of Arts & Sciences), and Buck Goldstein, University Entrepreneur-in-Residence. There is a growing sense of crisis and confusion about the purpose and sustainability of higher education in the United States. In Our Higher Calling, Thorp and Goldstein draw on interviews with higher education thought leaders and their own experience, inside and outside the academy, to address these problems head on, articulating the challenges facing higher education and describing in pragmatic terms what can and cannot change —and what should and should not change. Maternal Bodies: Redefining Motherhood in Early America (UNC Press, April 2018) by Nora Doyle (M.A. ’09, Ph.D. history ’13). In the second half of the 18th century, motherhood came to be viewed as women’s most important social role, and the figure of the good mother was celebrated as a moral force in American society. Doyle shows that depictions of motherhood in American culture began to define the ideal mother by her emotional and spiritual roles rather than by her physical work as a mother. As a result of this new vision, lower-class women and non-white women came to be excluded from the identity of the good mother because American culture defined them in terms of their physical labor.

Blackbeard’s Sunken Prize: The 300-Year Voyage of Queen Anne’s Revenge (UNC Press, June 2018) by Mark U. Wilde-Ramsing and Linda F. Carnes-McNaughton (Ph.D. anthropology ’97). In 1717, the notorious pirate Blackbeard captured a French slaving vessel off the coast of Martinique and made it his flagship, renaming it Queen Anne’s Revenge. Over the next six months, the heavily armed ship and its crew captured all manner of riches from merchant ships sailing the Caribbean to the Carolinas. But in June 1718, with British authorities closing in, Blackbeard reportedly ran Queen Anne’s Revenge aground just off the coast of what is now North Carolina’s Fort Macon State Park. When divers finally discovered the wreck in 1996, it was immediately heralded as a major find in both maritime archaeology and the history of piracy in the Atlantic.

The Missing Martyrs: Why There are So Few Muslim Terrorists (Oxford University Press, to be updated, fall 2018; original edition, July 2011) by Charles Kurzman, professor of sociology and co-director of the Carolina Center for the Study of the Middle East and Muslim Civilizations. Why are there so few Muslim terrorists? With more than a billion Muslims in the world — many of whom supposedly hate the West and ardently desire martyrdom — why don’t we see terrorist attacks every day? These questions may seem counterintuitive, in light of the death and devastation that terrorists have wrought around the world. But the scale of violence, outside of civil war zones, has been far lower than the waves of attacks that the world feared in the wake of 9/11. The Missing Martyrs draws on government sources and revolutionary publications, public opinion surveys and election results, historical documents and in-depth interviews with Muslims in the Middle East and around the world to examine barriers to terrorist recruitment. This revised edition, updated to include the self-proclaimed “Islamic State,” concludes that fear of terrorism should be brought into alignment with the actual level of threat, and that government policies and public opinion should be based on evidence rather than alarmist hyperbole.

Gone Dollywood (Ohio University Press, March 2018) by Graham Hoppe (M.A. folklore ’15). Dolly Parton isn’t just a country music superstar. She has built an empire. At the heart of that empire is Dollywood, a 150-acre fantasy land that hosts three million people a year. What does Dollywood have to offer besides entertainment? What do we find if we take this remarkable place seriously? How does it both confirm and subvert outsiders’ expectations of Appalachia? In Gone Dollywood, Hoppe blends tourism studies, celebrity studies, cultural analysis, folklore, and the acute observations and personal reflections of longform journalism into an unforgettable interrogation of Southern and American identity. The State of the University, 2000-2008: Major Addresses by UNC Chancellor James Moeser (UNC Press, April 2018) by James Moeser, UNC Chancellor emeritus, music professor and senior consultant for special initiatives at the Institute for the Arts and Humanities.Beginning with his installation as chancellor on University Day, 2000, Moeser started each academic year with a major address in which he outlined his envisioned agenda for the year ahead. In retrospect, these addresses can be read as guideposts to mark the history of Carolina’s first decade of the 21st century, a period of great progress. A common thread running through all of these addresses is a call for excellence — that Carolina should be America’s leading public university with a commitment to public engagement and social justice and that Carolina should be both great and good.