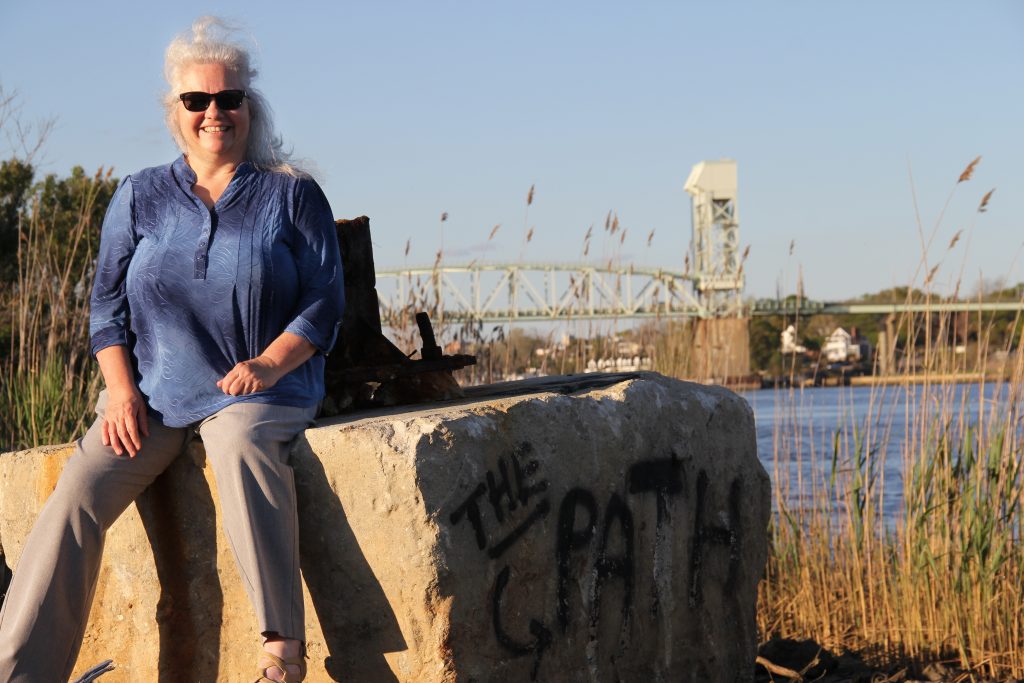 The path forward, according to Rachel Willis, involves infrastructure and ports (like the Cape Fear Memorial Bridge and Port of Wilmington in the background) that work with sea-level rise, rather than against it. (photo by Alyssa LaFaro)

Water Over the Bridge

A professor of American studies is helping port communities worldwide understand how rising sea levels and other impacts of climate change affect shipping and coastal infrastructures.

More than 14,000 vehicles cross the Herbert C. Bonner Bridge every day — a lifeline for the people of Ocracoke and Hatteras islands, connecting them to the Northern Outer Banks. Below the bridge, tides from the Atlantic Ocean push into the widening Oregon Inlet, breaking through to the Pamlico Sound.

The Bonner Bridge Replacement Project began on March 8, 2016. The new structure is designed to withstand 100 years of ocean currents, built with high-durability concrete and reinforced stainless steel. But it comes after years of failed attempts to create a durable bridge and countless arguments over environmental concerns.

Beach erosion, severe weather and heavy traffic have taken their toll on the bridge since it was first built in 1963. In 1990, in the middle of the night, a dredge rammed into the bridge during a brutal nor’easter, causing a 400-foot section to collapse into the waves below. For more than three months, Hatteras Island could be accessed only by boat or plane. In 2013, safety concerns closed the bridge for 12 days when routine sonar scanning showed that substantial sand erosion had compromised the support structure. And in summer 2017, construction crews struck major underground electrical cables, knocking out power to Ocracoke and Hatteras islands for a week.

Since the bridge’s original construction, more than $300 million has been spent to protect and repair it. 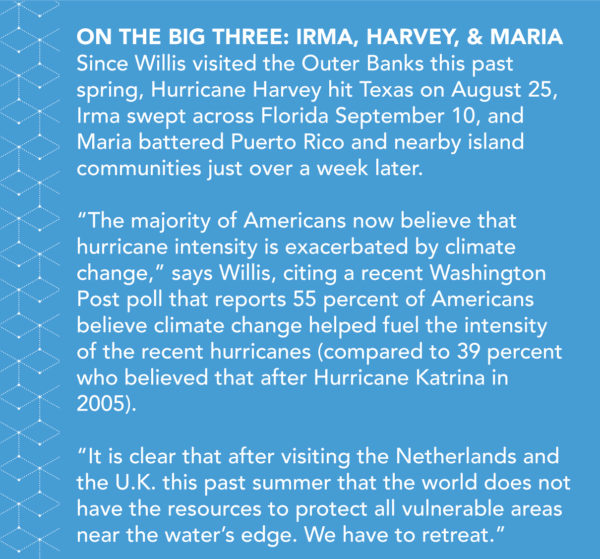 Rachel Willis watches the bridge construction from the water’s edge on Hatteras Island. She sighs.

“The ocean wants to open that inlet,” she says. “But we have put all this development and coastal infrastructure in a fixed place — and nature keeps taking it back. How are we preparing to protect the people in these communities? The answer is not ignoring the signs that nature gives us.”

Willis’ research examines the intersection of transportation infrastructure and sea-level rise. How does a labor economist end up studying climate change?

The answer is not one you’d expect: socks.

Knitting global social fabric
In the early 1990s, Willis and her students compiled data from every child care center in North Carolina — research that contributed to the development of Smart Start legislation. In 1994, while presenting this research at a conference, she met a sock manufacturer who would eventually introduce her to an industry specialist who created training programs for factories and workers.

In the 10 years that followed, Willis followed the lifecycle of socks around the world. She traveled to Italy, China and the Czech Republic to study sock-knitting machines and business practices. In North Carolina, she visited more than 200 sock factories and interviewed thousands of workers, owners, supervisors and suppliers.

But it wasn’t just about socks.

“The purpose of this research was, really, to find out the future of manufacturing, which was obviously declining in the United States. It quickly became clear that cost-effective land transportation was vital to global competitiveness.”

By land or by sea?
When you drive into Morehead City, you can follow the train tracks all the way to the port, thanks to the city’s namesake, John Motley Morehead, who as governor oversaw their construction in the 19th century. Today, boats still arrive at the port and load goods onto the trains, which make deliveries to local factories and villages along the corridor.

But this kind of infrastructure is the exception. “We’ve undervalued trains as a transportation method in this country,” Willis says. “It’s all about the interstate system here.”

Here’s why Willis believes the nation must put goods on railcars and then get railcars to ports: It costs about 80 cents per mile to move one metric ton of freight on an airplane. It costs 27 cents to move it by truck. It costs 2 cents by rail. “It costs one penny by water,” Willis stresses. These numbers don’t just represent product cost — they are a proxy for the amount of carbon put into the atmosphere to move goods around the planet.

The search for a solution

The Dutch have a famous saying: “God built the world, but the Dutch built Holland.” About one-fifth of the Netherlands lies below sea level and 60 percent is vulnerable to flooding — startling statistics that the Dutch have learned to live with. Unlike most of the world, they have always worked to maintain a symbiotic relationship with the water.

Willis has always been fascinated by Dutch resiliency. And with good reason.

In the 13th century, the Dutch were already reclaiming land lost to flooding through the construction of dikes. Two hundred years later, the invention of the rotating turret windmill not only pumped water out of permanently flooded lands, it provided an energy source. Fast forward to the 1980s, when the Dutch began the largest land reclamation project and erected the grandest flood barrier that the world has ever seen.

The barrier, called Maeslantkering, is equivalent in size to two Eiffel Towers placed horizontally on the water in the Hook of Holland. In 2015, Willis decided she had to see it for herself. “If you’re looking for an insane field trip, go see where these solutions are in full force,” she advises.

“The Dutch spend the same percentage of their national income on infrastructure related to water management as the U.S. spends on the military,” Willis says. “Because fighting the water is their national defense.”

Willis returned to the Netherlands this past summer to interview local experts on their refocused efforts to work with nature to provide coastal protection. In 2011, they used 21 million cubic meters of sand to form a hook-shaped peninsula called the “sand engine,” which enables the forces of the ocean to deposit sand along the North Sea coast.

Willis realizes that these solutions are not financially possible for most of the world’s coastlines. “The costs are astronomical for all but the wealthiest communities and countries,” she says.

Optimism and education
Approximately 50 percent of the world’s population will live within 30 miles of the coast by 2050, according to Willis. How do we prepare people for threats from more intense storms? More importantly, what happens to communities that are at risk now?

“I have great optimism about finding solutions,” Willis says. “Because I’ve seen extraordinary examples of them.” She stresses that working toward solutions involves seeing the whole picture.

“Our goals are not American — our goals are global. … The problem is not going away. It’s water over the bridge. We need to look at infrastructure in the short run that is adaptable to these floodwaters, but we need to use policy and incentives to stop building at the edge.”

Story and photos by Alyssa LaFaro, a writer for Endeavors magazine. The print version of this story was written before the hurricanes that hit the Southeast.