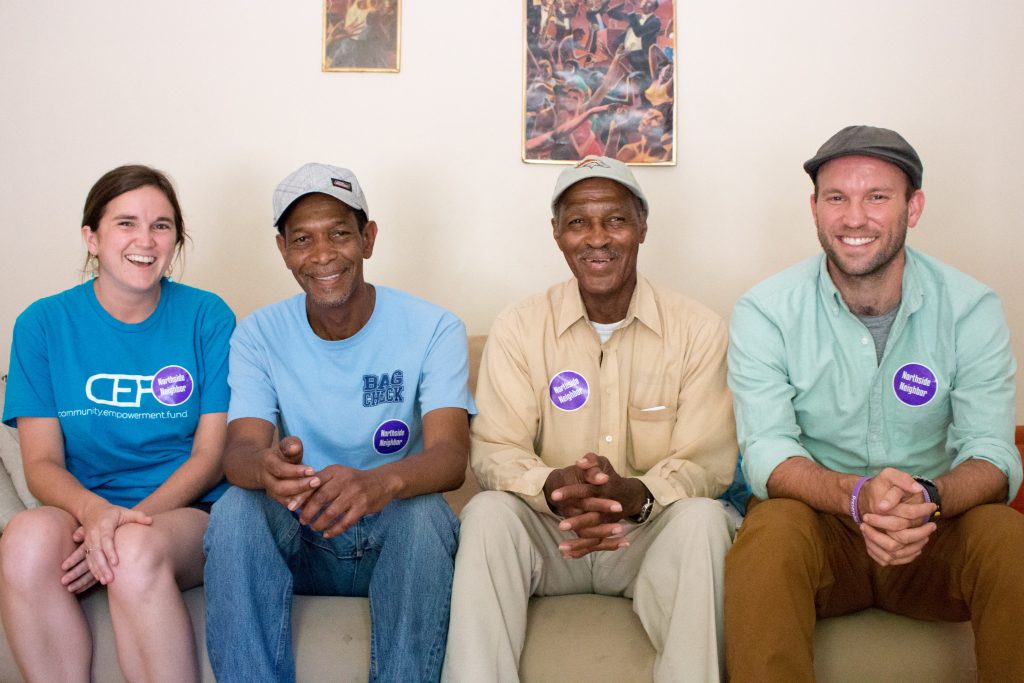 From left, Maggie West, Mike Alston, Julius Alston and Hudson Vaughan in the Alston brothers’ home. The Community Empowerment Fund and the Jackson Center worked together to help the brothers settle into a duplex in the Northside neighborhood. Photos by Kristen Chavez.

Collaboration, conversation and cultivating relationships with people in their community drive the work and personal lives of alumni couple Maggie West and Hudson Vaughan.

Two organizations they co-founded focus on preserving the future of historically black neighborhoods in Chapel Hill and providing relationship-based support for people experiencing homelessness. The seeds for those nonprofits — the Community Empowerment Fund and the Marian Cheek Jackson Center for Saving and Making History — were planted when they were students at UNC.

CEF, which initially grew out of a summer undergraduate research project, offers saving opportunities, financial education and support to individuals who are seeking employment, housing and financial freedom. It has chapters in Chapel Hill and Durham. West (public policy and Latin American studies ’10) serves as CEF’s co-director.

Vaughan (history and minor in entrepreneurship ’08) is senior director of the Jackson Center, which works to honor, renew and build community in Northside and Pine Knolls, two historically black neighborhoods in Chapel Hill. It grew out of a partnership between communication professor Della Pollock’s class and St. Joseph CME Church.

UNC students are actively engaged in both organizations — last year 390 volunteered at the Jackson Center and 150 at CEF. Students help with needs such as financial coaching, finding housing, organizing community cleanups and processing oral histories.

The couple first met over coffee in August 2009 when they discussed ways their two organizations could partner together. They continued to cross paths, their friendship developed into something deeper, and they were married in October 2014. They live in the Northside community, just minutes from where they work, and love hosting community barbecues. Vaughan still has a note from a neighbor that was written to the couple after they were married. In part, it reads: “I pray that your lives together will be overrunning with grace, love, mercy and peace. …”

“We are part of a community that has so powerfully taught us the lessons of love and resilience,” Vaughan said. “This community has made us want to stay rooted here.”

West said she felt encouraged during her time at UNC to take risks “and to see unexpected losses or challenges as learning opportunities,” a lesson that has served her well over the years.

“It sounds cliché, but it really got into my soul in a particular way — that invitation for things not to work out the way you wanted them to, but to actually turn out better because of that,” she said.

There are many ways in which their organizations intersect. They like to tell the story of Mike and Julius Alston, two brothers who were staying at the men’s shelter in Chapel Hill. CEF and the Jackson Center worked together to help the men settle into a duplex in Northside. (In 2015, Carolina provided a critical financial boost to the neighborhood with a $3 million, 10-year, no interest loan to establish a land bank as properties in Northside become available. The Alstons’ duplex was purchased with the help of Self-Help Credit Union, which manages the land bank.)

Both West and Vaughan have been recognized for their town-and-gown efforts. She was named the 2016 Citizen of the Year by the Chapel Hill-Carrboro Chamber of Commerce and was declared a “Hometown Hero” by WCHL/Chapelboro; he won a 2016 University Diversity Award. They both serve on the Orange County Affordable Housing Coalition.

At the heart of it all, they both say that what fuels their passion is being transformed by their community in all that they do.

“We’ve been together since the very beginning in watching our organizations grow and change. … Along the way, we’ve learned a lot from each other,” Vaughan said.

For more on the work of CEF and the Jackson Center, visit communityempowermentfund.org and jacksoncenter.info.