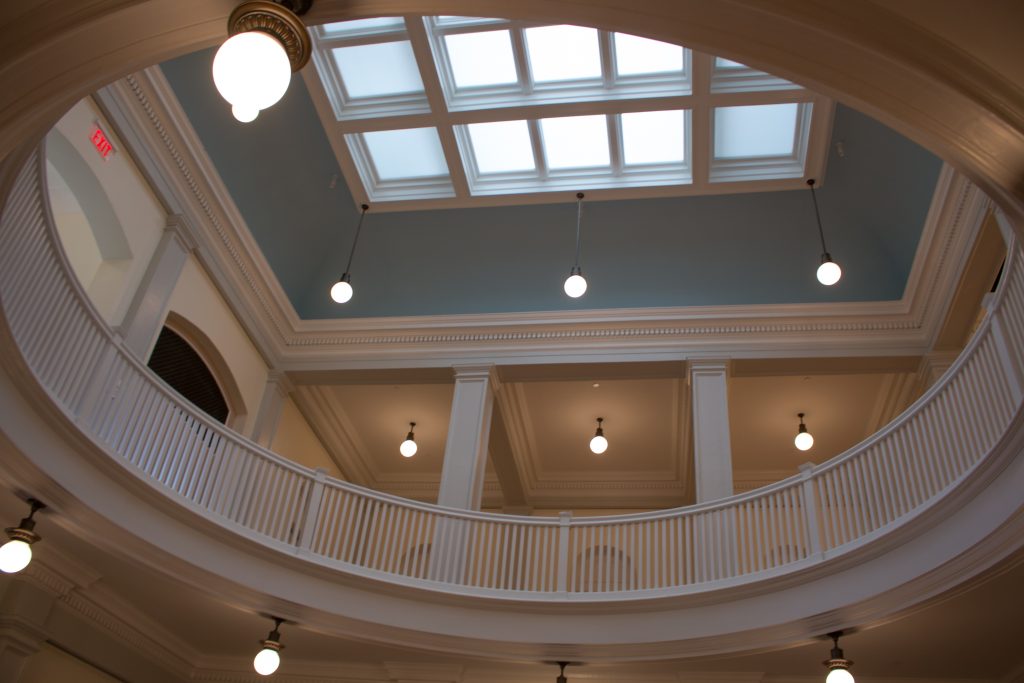 It’s been 87 years since Hill Hall was first dedicated as the home of UNC’s department of music. On Feb. 8, this storied building was presented anew after a $15 million, 18-month renovation.

The celebration included musical performances from faculty and students and remarks from Chancellor Carol Folt; Kevin Guskiewicz, dean of the College of Arts & Sciences; Louise Toppin ’83, chair of the department of music; Tom Kenan ’59; and Doug Zinn, executive director of the William R. Kenan Jr. Charitable Trust. Following a ribbon-cutting ceremony and the dedication of the James and Susan Moeser Auditorium, attendees were invited to explore the building or mingle in the newly expansive, light-filled rotunda.

“At long last, Hill Hall is a space as glorious as the music that has happened here for more than three quarters of a century,” said Guskiewicz. “If you look around, I think it’s safe to say this is far more than a renovation, this is a transformation.”

Both the chancellor and Zinn noted that there was no more appropriate name for the new auditorium. James Moeser, who served as UNC chancellor from 2000 to 2008, and Susan Moeser, a renowned organ recitalist, both continue to teach in the department of music.

Most of the building was closed for construction in June 2015. The renovation used no state appropriations and was funded with gifts: $5 million from the William R. Kenan Jr. Charitable Trust, $5 million from the Office of the Provost, and the remainder from College donors ($4.4 million has been raised to date, with fundraising ongoing).

“Thank you so much for paying us the honor of allowing us to participate in this wonderful building, which I hope will be a lasting tribute to musicians, faculty and students for years to come,” said Tom Kenan, whose family fund has supported the Kenan Music Scholars, the Kenan Music Building and many programs and buildings throughout the UNC campus.

Updates to the building include a climate control system and air conditioning, something Hill Hall has never had. Moeser Auditorium now has state-of-the-art acoustical treatments, recording tools to capture performances and a professional-grade stage. Backstage, there are modern dressing rooms, lighting, and storage and teaching spaces. The rotunda, one of Hill Hall’s distinguishing features, was refurbished to become a space appropriate for receptions and small performances.

The renovation also gave the building state-of-the-art classrooms, a seminar room, a graduate student lounge and a new band suite.

“What was once a tired, dysfunctional building, which we still loved, is now a source of pride and inspiration for the campus,” said Toppin.

To name a seat in the James and Susan Moeser Auditorium or a space in historic Hill Hall, contact Peyton Stokley, senior associate director of development, at 919-843-5285 or peyton.stokley@unc.edu.