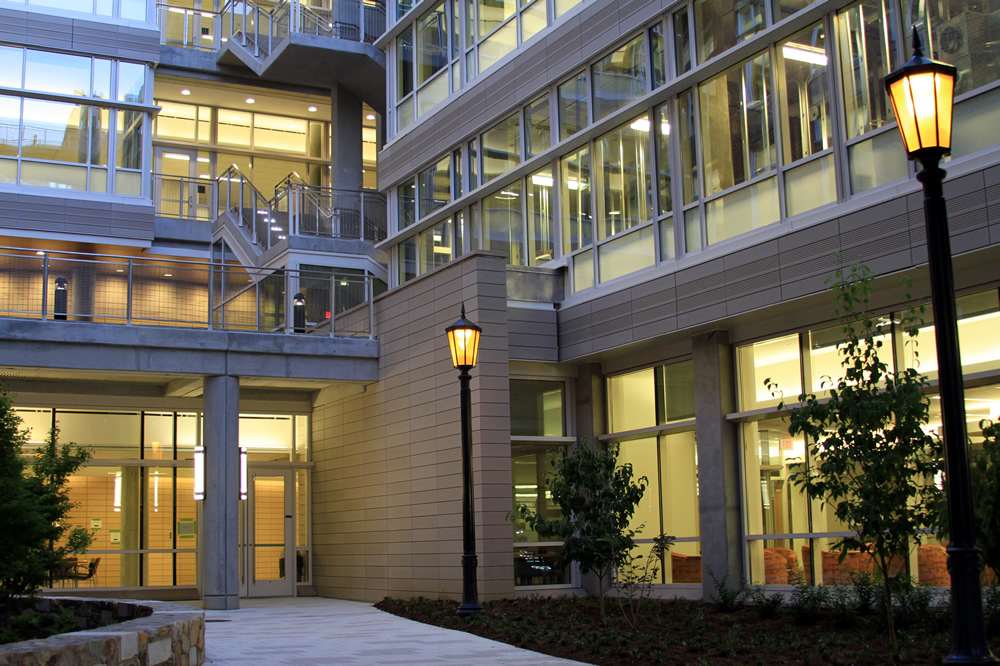 The courtyard between Venable and Murray halls, two of the buildings in the Carolina Physical Sciences Complex, the largest construction project in the University’s history. (photo by Lars Sahl)

As the University launches a new fundraising campaign this fall, we are looking at how gifts made during the Carolina First campaign (1999-2007) continue to strengthen the arts and sciences.

In the winter of 2000, Jeff Johnson visited the Carolina campus for the first time, hoping to secure a tenure-track faculty position in chemistry. Johnson had just earned his Ph.D. from Harvard University in 1999 and was in the midst of a postdoc at the University of California, Berkeley.

Facility tours back then were, well, fast. Prospective faculty and graduate students were whisked through Venable Hall, built in 1925, where faucets dripped and research was conducted at cramped and decades-old lab stations.

“During my interview, Royce Murray pulled out the plans for new chemistry buildings that would replace Venable and reduce crowding in Kenan and Morehead Labs,” said Johnson, department chair since 2015. “You could sense his excitement for what this would mean for science at Carolina.”

Murray, a Kenan Professor and former chair of the department who was honored with his name on one of the five science buildings, helped lead the planning for the complex. Partially funded with $22 million in private gifts and $84 million from a higher education bond referendum, the $205 million complex was the largest construction project in the University’s history.

From 2003 to 2010, the science complex took shape on the western edges of Polk Place. Three new buildings — Murray, Caudill and (new) Venable Halls — house chemistry, marine sciences and a new department, applied physical sciences. Two other buildings in the science complex are Chapman, home to physics and astronomy; and Brooks, an addition to Sitterson Hall, which houses computer science.

“Solar energy research was what drew me to graduate school, and the faculty at UNC’s Energy Frontier Research Center drew me to Carolina specifically,” said Kate Pitman, a Ph.D. candidate in chemistry.

UNC’s EFRC Center for Solar Fuels, funded by the U.S. Department of Energy, was established in 2009. While the center builds on years of research by UNC faculty, “world-class” facilities were key to the center securing research dollars.

Emma Kelly ’17 hung up her waitress apron at her hometown diner last summer and turned her focus to changing the world.

A William W. and Ida W. Taylor Honors Fellowship enabled the environmental science major to stay in Chapel Hill during the summer to analyze water management data in the developing world.

“We were eager to mine the wealth of data that we collected in Zambia, Ghana and Kenya the prior summer. These funds allowed me to work on disseminating our findings,” said Kelly.

In recent years, the deciding factor for exceptional students who choose Carolina over other schools has been its nationally acclaimed honors program, said James Leloudis ’77, associate dean for Honors Carolina. A Carolina First priority was to double the number of honors students without compromising the seminar-style instruction in classes of 20 to 24 students.

Today, Honors Carolina is ranked No. 4 nationally; it’s been a model program since it was created in 1954.