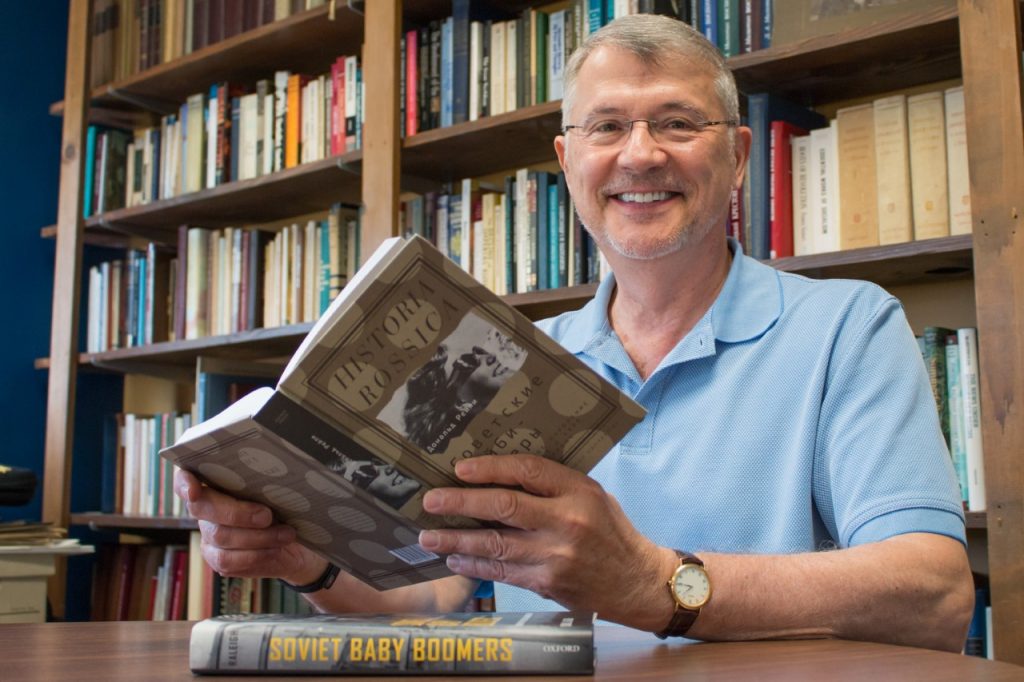 A scholar and a mentor

“Growing up in Dr. Strangelove’s America, with the Cold War in my face, had an impact on my interest in Russian studies,” said Donald J. Raleigh, Jay Richard Judson Distinguished Professor of History. “Studying the Russian language was remote, mysterious and difficult — qualities that made it appealing to me.”

In 1971, as a senior Russian area studies major at Knox College in Illinois, Raleigh was chosen to be in the third group of American undergraduates to spend a semester at Leningrad University. “It was very hard, the living conditions were grim, and I was hospitalized due to a parasitic infection for 10 days in a 19th-century military hospital with very poor conditions,” Raleigh said. “It was a tough experience but one that confirmed my interest in Russian studies, Russian culture and my commitment to the field.”

Afterward, Raleigh enrolled in the Ph.D. program at Indiana University, where he became the first Anglo-American scholar to write about the Russian Revolution in provincial Russia. “Up to that point, all of our scholarship was based on the capital city, but I thought, ‘What about the Des Moines of Russia or the Peoria of Russia?’” he said. Raleigh has written extensively about the revolution, with an emphasis on the local history of the Saratov region.

The city of Saratov was physically off-limits to foreigners until 1990, when it was opened thanks to Gorbachev and perestroika. “I had a fellowship in 1990 at the National Humanities Center to write my second Saratov book, but I had the chance to go to Saratov for the first time and have access to Russian archives,” he said. “I made the decision to start the project over and spent the following 10 summers researching in that provincial city.”

The result was his book Experiencing Russia’s Civil War: Politics, Society and Revolutionary Culture in Saratov, 1917–1922.

Raleigh, director of the Center for Slavic, Eurasian and East European Studies at UNC, is currently researching a biography of Leonid Brezhnev, who led the Soviet Union from 1964 to 1982, longer than any other Soviet leader besides Stalin. “One of the interesting things about Brezhnev is that since the start of the new millennium, he is the most popular Russian leader of the 20th century, according to annual public opinion surveys, but there is no academic biography of him,” said Raleigh.

This past summer, Raleigh spent three weeks in Kazakhstan, where Brezhnev was a party boss from 1954 to 1956. His research has already taken him to Moldova and Russia. Next year he will work in archives in Ukraine. Raleigh has had access to Brezhnev’s diary, which is not available to the public.

“I was invited by several Russian historians to help publish the diary this year in Moscow,” he said.

Raleigh wrote about Brezhnev’s foreign policy for the introduction of the published diary. He also wrote “Leonid Brezhnev: Soviet Man of Peace,” an English-language article that will be published in Kritika, an international journal of Russian studies.

While Raleigh loves his research, working with graduate students is a top priority. This commitment was recognized this spring when he was awarded the 2016 Faculty Award for Excellence in Doctoral Mentoring given by The Graduate School. “I’m obviously very humbled and delighted by the award and the fact that former students took the time to nominate me,” he said.

Raleigh has mentored 22 Ph.D. students. Each year, he organizes a get-together for them during the annual Association for Slavic, East European and Eurasian Studies conference.

“A multigenerational group of my current and former students from all over the world come together for a meal,” he said. “I am particularly proud that my students are shaping the field, creating new knowledge about Russia and fostering networks of support for one another.”