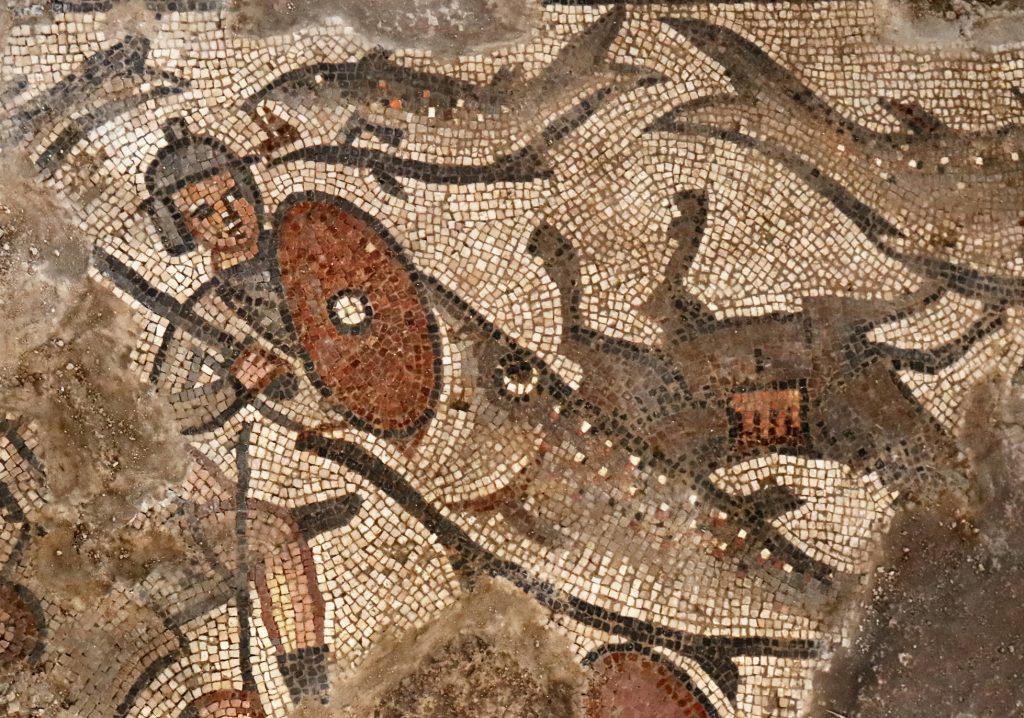 The scene of the parting of the Red Sea shows Pharaoh’s soldiers being swallowed by large fish, surrounded by overturned chariots with horses and chariot drivers. (Photo by Jim Haberman)

Excavations this past summer in the Late Roman (fifth century) synagogue at Huqoq, an ancient Jewish village in Israel’s Lower Galilee, have revealed stunning new mosaics that decorated the floor. The excavations are directed by Jodi Magness, a UNC religious studies professor, along with assistant director Shua Kisilevitz of the Israel Antiquities Authority.

The mosaic panels decorating the floor of the synagogue’s nave (center of the hall) portray two biblical stories: Noah’s Ark and the parting of the Red Sea. The panel with Noah’s Ark depicts an ark and pairs of animals, including elephants, leopards, donkeys, snakes, bears, lions, ostriches, camels, sheep and goats. The scene of the parting of the Red Sea shows Pharaoh’s soldiers being swallowed by large fish, surrounded by overturned chariots with horses and chariot drivers.

“These scenes are very rare in ancient synagogues,” said Magness, Kenan Distinguished Professor. “The only other examples that have been found are at Gerasa/Jerash in Jordan and Mopsuestia/Misis in Turkey (Noah’s Ark), and at Khirbet Wadi Hamam in Israel and Dura-Europos in Syria (the parting of the Red Sea).”

Mosaics were first discovered at the site in 2012, and excavations have since continued each summer. Excavations are scheduled to continue in summer 2017.

UNC-Chapel Hill, Baylor University, Brigham Young University and the University of Toronto are project sponsors. Financial support for the 2016 season was also provided by the National Geographic Society, the Memorial Foundation for Jewish Culture and the Carolina Center for Jewish Studies.

Read more about the summer discovery.