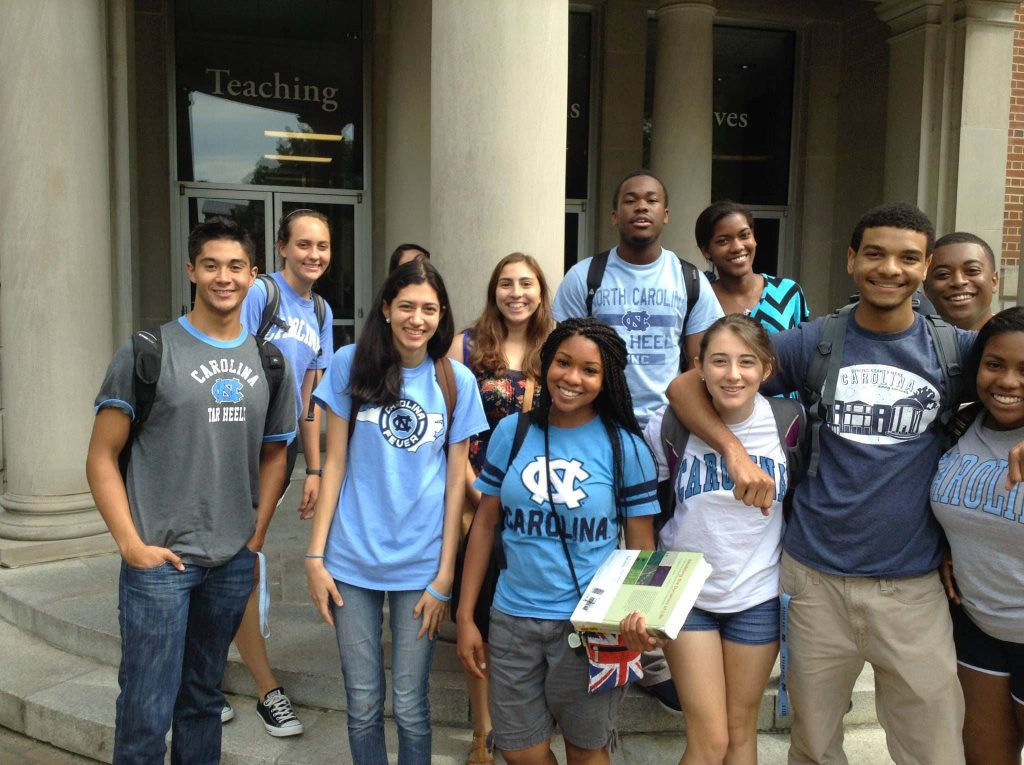 Like her peers in the Chancellor’s Science Scholars program, sophomore Diana Lopez hopes to pursue a career in scientific research.

The program, which began in 2013 and moved into the College of Arts and Sciences in August, provides financial and academic support to encourage talented students who are dedicated to advancing diversity in the sciences to pursue Ph.D. or M.D./Ph.D. degrees in science or mathematics.

The program is modeled after the nationally recognized Meyerhoff Scholars Program at the University of Maryland-Baltimore County.

“We have to find a way to get more students of diverse backgrounds into doctorate programs,” said Mike Crimmins, executive director of the program and the Mary Ann Smith Professor of Chemistry. “This intensive academic start to their undergraduate studies, along with continuous support, will allow them to succeed in math and science at their full potential both now and in graduate school.”

Lopez, who hopes to earn an M.D./Ph.D. in neuroscience, spent last summer at a University of Miami lab studying pH changes in the brain and the subsequent effects on behavior. She’s currently working in the concussion lab of UNC neuroscientist Kevin Guskiewicz, dean-designate of the College.

“Being involved in research as an undergrad has opened so many doors for me,” Lopez said. “It has opened my eyes to the countless topics to investigate, especially having to do with the human brain, which is infinitely complex and, to me, the most fascinating organ in the human body. In addition, I have met a lot of like-minded people from all over the world who are also involved in the field that have taught me so much.”

Ninety scholars in the program make up three cohort classes (students who entered the university in 2013, 2014 and 2015, respectively). They are encouraged to bond with students in their cohort as they begin their Carolina education with an accelerated, intensive six-week summer program. Students receive high-level advising support throughout their four years, both as a group and individually.

Gaining undergraduate research experience is a core value of the program. On a recent Friday afternoon, program coordinator Melinda Frank led a meeting with cohort II students in the Genome Science Building. She urged them to prepare a CV and to find a research opportunity soon, so they can include that experience on their graduate school applications.

“Your research experience doesn’t necessarily have to be in your field — if it looks really interesting, go for it,” Frank said.

“My diverse cohort has created strong connections and friendships to grow individually while we also support one another through the challenges that we face,” he said. “The Chancellor’s Science Scholars program unlocks the doors to success and achievement, leaving us with the task of simply opening those doors.”

Among the first students admitted to the program, Sierra Atwater will be in the inaugural graduating class of Chancellor’s Science Scholars in 2017. She’s a quantitative biology major and chemistry minor who hopes to become a research physician in pediatric oncology.

Atwater said she has benefited from not only the support of her cohort group but also “the amazing faculty that are invested in our success as students.”

“This program has truly helped me get amazing summer research opportunities and to succeed in science at Carolina.”