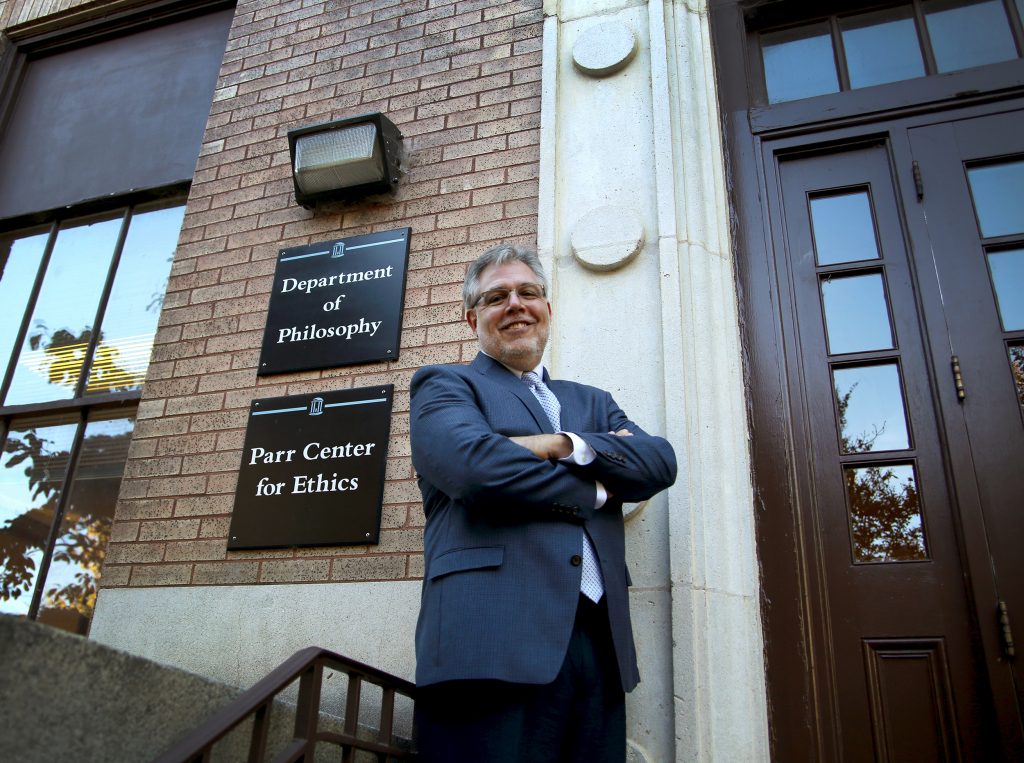 Russ Shafer-Landau arrived at Brown University 34 years ago seeking the answer to the meaning of life.

By the end of his sophomore year, he had taken 16 courses in 16 different departments but was no closer to figuring out what subject he should study. Fearing that he was blowing a great educational opportunity, he decided to take a year off from college to regroup – to focus on the purpose of his own life instead of the meaning of life in general.

Then an old high school buddy from Philadelphia called, looking for a drummer for his rock band. Shafer-Landau had been playing drums since the age of 6. “Come down play with us and see how it goes,” the buddy said.

The jamming sessions stretched into a nine-month gig that might easily have turned into a career, Shafer-Landau said, especially after the band was offered a recording contract. Forced to choose the band or Brown, the drummer picked college.

He still hadn’t figured out what he wanted to study. But after hiking through Europe with a backpack stuffed with Greek literature and philosophy, he knew.

“It was through those books that I got excited again about philosophy,” Shafer-Landau said. “When I went back to college, I knew for the first time what I needed to do and what I wanted to study.”

There was no turning back.

A chance to ‘do more good’

A year ago, when the director of the UNC Parr Center for Ethics resigned after she was implicated in the University’s academic irregularity investigation, leaders at the University were confronted with their own difficult decision, said Geoff Sayre-McCord, the distinguished professor of philosophy who served as the center’s interim director. The Parr Center and the department of philosophy are in UNC’s College of Arts and Sciences.

“To the credit of the chancellor, the provost and the dean, what they said is, ‘This center is so vitally important to the character and future of the University, it’s got to not just survive, but thrive, and for that to happen we’ve got to get the best person possible,’” Sayre-McCord said. “That is exactly the person they got when they hired Russ Shafer-Landau.”

Sayre-McCord said Shafer-Landau is, first and foremost, “a moral philosopher with an international reputation for excellence.” A leading scholar in the field of metaethics, Shafer-Landau focuses on what morality itself is rather than whether a particular act is moral. He also writes books for non-philosophers, such as “Whatever Happened to Good and Evil?”

Sayre-McCord could think of no one better suited to lead the Parr Center than Shafer-Landau.

“I would say what is unparalleled about Russ is his versatility – that dual combination of leadership at the cutting edge of the field and his facility and interest in welcoming people who are not professionals into thinking about core issues within an ethical framework,” Sayre-McCord said.

So he called Shafer-Landau to talk him into leaving a perfectly good job at University of Wisconsin-Madison, where he had been chair of the philosophy department for five years, to come run the Parr Center.

“Think of all the good you could do, all the people you could reach, running a center instead of going back to the classroom,” Sayre-McCord told him. The fact that Sayre-McCord’s appeal worked, he said, is further proof that Shafer-Landau was the right person for the job.

Philosophy can be cool

“We philosophers, on the whole, have been quite bad about explaining the value that we can offer,” Shafer-Landau said. “What we need to do to overcome these perceptions is to show philosophy in action – and we do that by sharing it with people who are not philosophers. If we do that, they can see that we are talking about really interesting questions that have deep personal relevance.”

Living an ethical life is living a good life, he said, and “why you should care about ethics is actually an incredibly cool, deep philosophical question.”

As the center’s director, Shafer-Landau said he has the opportunity to do good, something that’s important to him. “I get to direct, to lead and to participate in a whole battery of interesting programs that bring an ethical perspective to students, fellow faculty members and to staff on campus. That is a relatively rare opportunity in academia.”

Among them is the Parr Center Presents series that brings nationally recognized experts to campus to talk about current issues of moral importance. In October, Amy Perko, the executive director of the Knight Commission on Intercollegiate Athletics, came to campus to discuss “An Ethical Framework for College Sports” and New Yorker financial writer James Surowiecki came to speak on “When Self-Regulation Doesn’t Work: Bankers Behaving Badly and What to Do About It.” On Nov. 19, Kit Wellman, chair of the philosophy department at Washington University in St. Louis, will speak on the ethics of immigration and refugees in crisis.

Since his arrival, Shafer-Landau brought to campus an annual metaethics workshop, now in its 12th year. The workshop recently brought more than 120 philosophers from around the world to Carolina.

“What metaethics does in a nutshell is it asks about the status of morality,” Shafer-Landau said. “Is it all made up by human beings relative to individual taste or cultural opinion, or is there some objective source to morality?”

Metaethics also gets at the question of why people should try to be moral, Shafer-Landau said.

“Rather than ask specifically what is right or wrong, we who are doing metaethics take a step back and ask why does it matter. What reason do we have to comply with morality?”

The Parr Center is also the founding home and headquarters of the National High School Ethics Bowl, now in its fourth year. The Ethics Bowl serves more than 2,000 students and teachers across the country. In partnership with the philosophy department, the Center also sponsors the Philosophy Outreach program, which held more than 200 events across North Carolina last year.

“We are not preachers. We are not here to indoctrinate anybody. We don’t tell people which values they ought to live by,” Shafer-Landau said.

“What we do is facilitate conversations that help people think on their own through life’s difficult questions. What thinking critically about ethics helps you do is think about what the right values are to live your life by.”