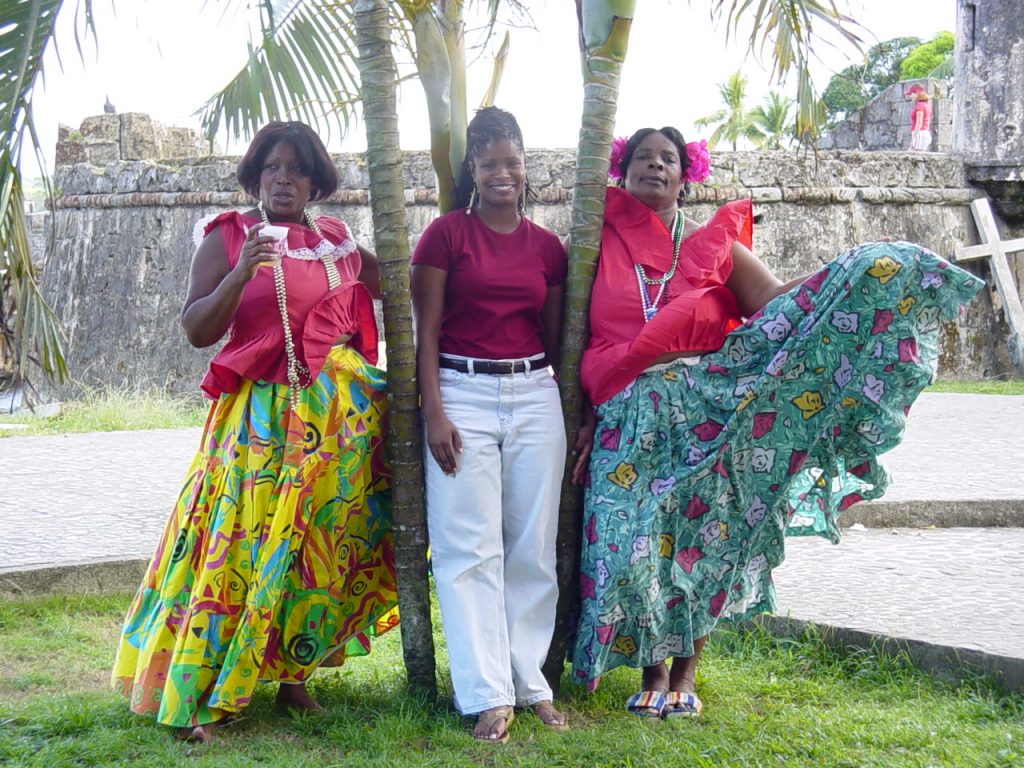 For more than a decade, the fruits of Renee Craft’s field research — audio and video interviews in technical formats ranging from Hi8 to mini-DV — had been sealed away in “oversized Tupperware tombs” under her bed.

The interviews focused on the Congo carnival tradition of Portobelo, an Afro-Latin community on the Panama coast.

Craft, an assistant professor of communication studies, was working on her first book, When the Devil Knocks: The Congo Tradition and the Politics of 20th Century Blackness in Panama (The Ohio State University Press, January 2015). She never intended to make the full content of those interviews widely available. Yet she was bothered by a nagging sense that the project was incomplete.

“Because this tradition was largely absent from discourses on black cultural performances in the Americas, I was clear the book would make a positive scholarly contribution, but I was also clear that it would not be very useful to the local community,” said Craft, who holds a joint appointment in global studies. “What they really wanted was a type of cultural preservation they could more directly access, but I didn’t know how to do that.”

For years, Craft had given copies of photos and tapes to individual community members. Then, a presentation by UNC’s Digital Innovation Lab in spring 2012 began to unlock the possibility of making this wealth of material available to the people of Portobelo and the larger world through digitization.

Digital humanities projects take traditional humanities scholarship to a new level and often to new audiences — incorporating research, teaching and community engagement in an online platform. They can be interdisciplinary, collaborative and embrace a variety of topics from curating collections to mining information from complex data.

Craft met with lab associate director Pam Lach, and then she said “wonderfully magical moments started to happen that allowed me to envision how to shape the project. I wanted a digital repository to protect the material, but I wanted it to be flexible and open to any community member and enticing to other researchers.”

Craft spent a year as an inaugural Digital Innovation Lab/Institute for the Arts and Humanities Fellow, one of the many programs of the Carolina Digital Humanities Initiative. The culminating effort, Digital Portobelo, is an interactive collection of ethnographic interviews, photos, videos, artwork and archival material that illuminates the rich culture and history of the region. The online project and the book complement each other.

“Renee has a great vision for this and so much energy,” Lach said. “It’s a beautiful piece of scholarship, but it’s also a beautiful example of community storytelling. I look forward to seeing how it will grow over the years.”

Craft was doing her master’s work in communication studies at UNC when she heard a talk by Spelman College artist and scholar Arturo Lindsay about the community of Portobelo. She was intrigued, spent some time in an artist’s collective that Lindsay co-founded and later decided to focus her doctoral dissertation research at Northwestern University on the Congo tradition.

Through storytelling, costumed dancing, singing and drumming, the tradition honors the history of the cimarrones — runaway enslaved Africans who successfully fought for their freedom during the Spanish colonial period. The main drama takes place during carnival season, which peaks on Shrove Tuesday and Ash Wednesday. The performance includes characters such as the Major Devil, a King, a Queen, Archangels and Souls.

Craft said digital humanities scholarship opened doors to her research in ways she could not have imagined.

Craft had done extensive interviews with Celedonio Molinar, a local man who played the Major Devil character for 60 years but passed away in 2005. She had been trying off and on for about 10 years to reach scholar Ileana Solís, a University of Panama professor who had also done research on Molinar, but did not get a response from her. Solís is also among the few women who have performed as the Devil character.

“Ileana was concerned about preserving her legacy and research which was largely invested in the transformative power of community theater,” Craft said. “When she heard that there was an online space that would include other Panamanians and international researchers and that her work would not be mediated by another voice, she was very interested in that.”

Solís has since given her videotapes and research to the Digital Portobelo team to incorporate into the site.

Digital Portobelo features many audio interviews, including one with Solís, in a rolling dual-language transcript thanks to DH Press, a tool developed by the Digital Innovation Lab and UNC’s Renaissance Computing Institute. The interviews are in Spanish, but listeners can read the translations of the interviews in both Spanish and English as the audio unfolds.

The Congo tradition has been threatened in recent years by the passing of elders, the relocation of community members to larger cities, the impact of cultural tourism and a growing disassociation among the younger generation.

When Craft first began her research in 2000, “Cellphones were rare, the cost of Internet access was prohibitive and most of the community lacked computers,” she wrote in her project blog.

“As we work to build an even stronger infrastructure for formal community engagement, this gives them a way to [participate] even as we are evolving,” Craft said.

She and her team are hoping to train Portobelo middle school students and elders to interview each other. Working in concert with a new Congo cultural center, the participants will upload those oral histories to SoundCloud.

“I want to support the local history curriculum and also link to the school’s tourism track so that this might help economic development efforts,” Craft said. “How do we build relationships with organizations on the ground who might want to contribute to the site? The mark of this being a successful project is if in five years it doesn’t depend on me at all.”

Robert Allen, Godfrey Distinguished Professor of American Studies and director of the Digital Innovation Lab, calls Digital Portobelo “a wonderful example of how digital humanities can both deepen humanistic scholarship and extend its reach far beyond Chapel Hill.”

“Renee is the ideal faculty colleague with whom to collaborate on digital humanities projects: open to all possibilities, determined to make things work out the best for everyone involved and willing to step into the technological unknown,” he added.

Sandra Davidson is a UNC master’s student in folklore who worked on Digital Portobelo as a participant in the lab’s practicum course. She said the project appealed to her because she is passionate about taking humanities research beyond the academy.

“Accessibility, engagement and keeping in mind the audience when you are doing your own research — at a major public research university, I see that as a huge priority,” she said.

Craft blogged about her project at portobelo.web.unc.edu. Learn more about the Digital Innovation Lab at digitalinnovation.unc.edu.