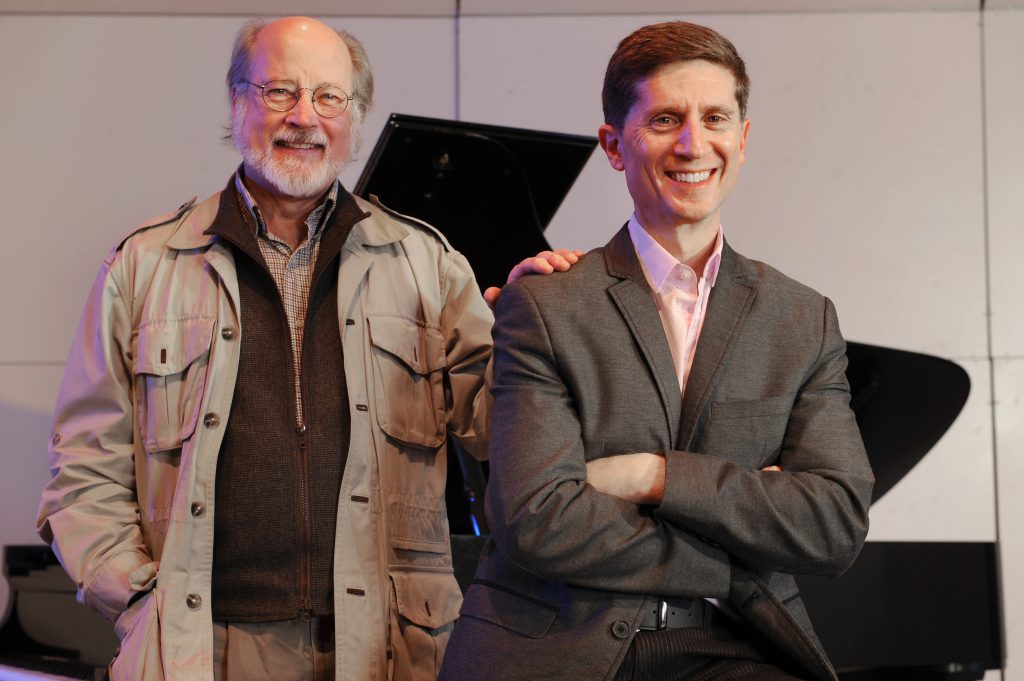 Creative writing professor Bland Simpson remembers well the first time he met music professor Mark Katz. It was the first week of classes in spring of 2013, and Simpson was teaching the inaugural “Collaboration: Composers and Lyricists” course in a Hill Hall classroom. Katz’s students were jamming in “The Art and Culture of the DJ” in the room right above Simpson’s class.

“He said, ‘I’m here to warn you that my class upstairs has DJ music in it, and we’ll be making a lot of noise, so if we disturb you, just let me know,’” Simpson recalls. “And I said, ‘Oh, we’ll just make noise back.’” (Read a sidebar on Mipso, the up-and-coming acoustic alumni trio, who have ties to Simpson and Katz.)

The students in these contemporary music classes are not all music majors — their academic pursuits span the arts and sciences. And that’s precisely the point, argues Katz. He says most musicians in the world do not read music notation with any proficiency. He wants musicians of all types to feel welcome, not just those with formal training.

A new initiative he calls the Carolina Beat Academy offers three courses in addition to the DJ one: “Beat-Making Lab,” “MC (or Rap) Lab” and “Rock Lab.” These courses do something that few universities do: They offer hands-on training in popular music composition and performance, Katz says.

“They are relevant, substantive and meaningful, and they do all the things our critics would like to see more of — connecting students to the real world and instilling in them an entrepreneurial mindset and an interest in social engagement,” Katz says. “I see no dissonance, to use a musical term, between the study of classical music and the study of any other kind of music. It’s all music.”

Simpson’s creative writing students produced a professionally mastered CD at Chapel Hill’s The Rubber Room studio at the end of their course, which focused, per the title, on collaboration — a critical skill valuable to any profession, he says.

“People are on teams everywhere: in labs, in business, in publications,” says Simpson, Kenan Distinguished Professor and long-time member of the Tony Award-winning string band, The Red Clay Ramblers. “And in the workshop model, for courses in writing music and lyrics, or fiction or playwriting, these [experiences] are confidence builders. It helps to know that it doesn’t have to be perfect to share it among friends, who can help you decide, what’s going to make it better?”

Katz admits that friends he went to high school with would be amused to learn that this “classical nerd” who has written about Beethoven, Bach and Stravinsky has also written a seminal book on the history of the hip-hop DJ.

He was always the kid who played “air violin” instead of “air guitar,” Katz jokes. But when he was about 13, he first heard the sound of “scratching” on an MTV video of Herbie Hancock’s “Rockit.” Katz was hooked.

One thing led to another and Katz decided to make the intersection of technology and music culture the focus of his research. His 2012 book, Groove Music: The Art and Culture of the Hip-Hop DJ (Oxford University Press) was recently named by Rolling Stone magazine as one of the top music books of the year. (And yes, he’s an amateur DJ, too.)

An innovation grant from UNC’s Institute for the Arts and Humanities (IAH) helped Katz develop new courses that led to the creation of the Carolina Beat Academy. He will continue to inspire colleagues who have creative ideas as he takes over the helm of the IAH in July. His initial idea for the beat academy led to private support from UNC alumnus John Powell and most recently, a $1 million U.S. State Department grant that will create a program called Next Level, which will use hip-hop to promote international cultural exchange and conflict resolution.

It’s impossible to stop the toe-tapping, head-bobbing and finger-snapping when you walk into the DJ class. On the first day of class this January, the DJs-in-residence, A-Minor and SK, invite students to the front of the room to try “scratching” by moving a vinyl record back and forth on a turntable.

Gray Gerald ’13, who graduated with a communication studies degree and a focus on media production, says that when he took the DJ class taught by Katz last spring, it changed his life.

Up until that point, Gerald knew he wanted to do something involving music and the arts, but he wasn’t sure what.

“The first day of class, I’m watching what the [guest DJs] are doing, and I was mesmerized,” he says.

Gerald began immersing himself in DJ life, going to office hours every Tuesday, observing DJs at work and more. He entered an essay contest at the end of the semester sponsored by drink maker Red Bull and ended up winning DJ equipment which he has used to start his own business. Since then, he has been doing gigs as “DJ Gray Area.”

“I have a huge amount of creative energy and a desire to share it in a positive and productive way,” Gerald wrote in his winning essay. “I was searching for a profession that I could take on which would allow me to utilize these skills, but nothing felt quite right. Deejaying feels right.”

Simpson won’t teach his “collaboration” class again until spring 2015, but this semester he’s teaching playwriting in that same Hill Hall classroom that inspired so much “spontaneous combustion” last spring. When he next offers it, the course will be cross-listed in English and music.

One day early in the current spring semester, Simpson hops to the piano to rouse students into a vocal warm-up of a Charlie Poole song, urging that “our voices do better when we warm up; that’s as true for people on stage as those who are going to sing.”

Simpson had taught previous courses that focused just on lyric writing, but adding in the composing element was new. Students were paired up and wrote 42 songs over the course of the semester; 10 made their way onto the final CD.

“There were some students who had never been in a studio. Someone said, ‘This fulfills one of my dreams, to be in a recording studio and sing on a record,’” Simpson says. “I knew from the strength of the work … that it was the right thing to do.”

Joey Rasmus ’14, who is double majoring in economics, and peace, war and defense, got hooked after taking Simpson’s class. With Simpson’s guidance, he’s written the full book and lyrics to a musical called “The Bipartisan” that he hopes to get produced this spring. The satirical look at gridlock in Congress features an independent voter fresh out of graduate school who’s from North Carolina’s Fourth District, which includes Chapel Hill.

At the close of the semester, the students also put on a concert.

“Bland is like a dad in the back watching his kids, and at the end we surprised him and sang one of his songs, ‘Follow You All Over the World,’ and he started crying. It was incredible,” Rasmus says. “In the songwriting class, you could tell that this is what Bland loves to do.”

Biology major and creative writing minor Kati Moore ’14 plays guitar and violin and is in a local band, but she didn’t want to major in music. The Carolina Scientific magazine editor says classes like Simpson’s are important because they have introduced her to “a great community of students who are into music at UNC, who are not necessarily music majors.”

Watch videos on the music department’s “Beat-Making Lab” and “Making and Marketing Music in the Digital Age.”

Listen to a WXYC podcast with students from Simpson’s songwriting class.