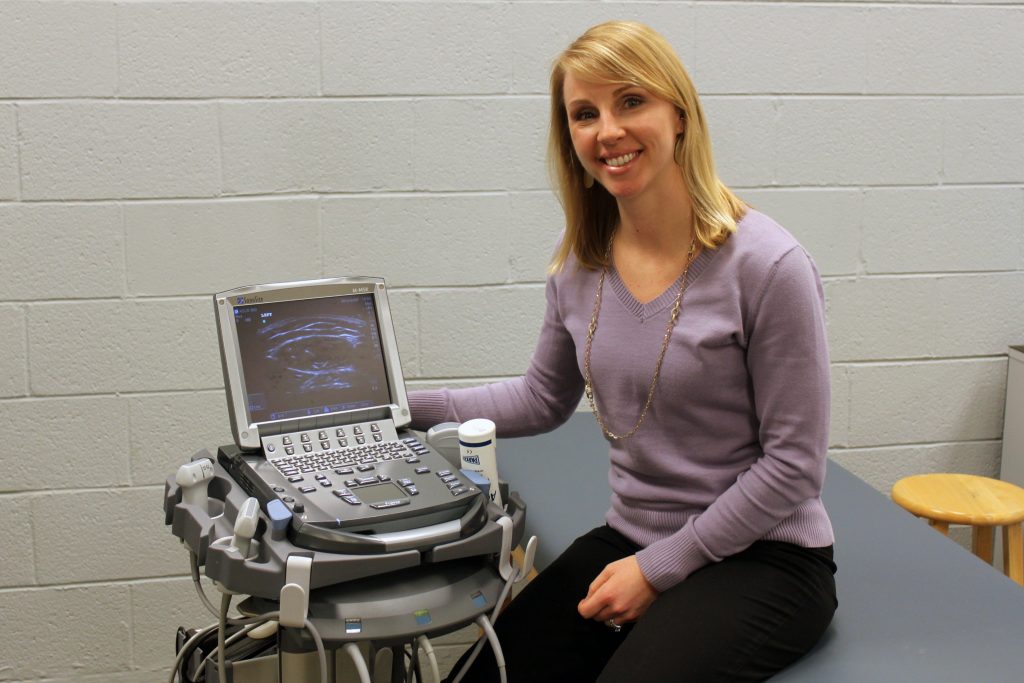 Becky Begalle works with young female athletes, in particular, on addressing ACL injuries that can threaten to unravel their lives. (photo by Beth Lawrence)

“… to enhance the physical well-being and quality of life of people by creating and disseminating knowledge about the causes and consequences of human movement disorders including behavioral, physiological and mechanical factors …”

Add just three words, anterior cruciate ligament (ACL), to this, the core of the mission statement of the College of Arts and Sciences’ curriculum in human movement science, and there it is, Becky Begalle’s driving passion in tidy summary.

The seamless thread that has run through all aspects of her life, beginning with a childhood and youth spent in upstate New York, has been “exercise, fitness and wellness,” explains Begalle ’14. She is a fifth-year doctoral candidate in the curriculum, and a research and teaching assistant in the department of exercise and sport science.

As a student-athlete in high school and college, Begalle experienced her share of injuries but values what participation in sport contributed to who she has become.

She worked clinically as an athletic trainer for seven years where she witnessed a large number of ACL knee injuries and often second ACL injuries. She wanted to better understand prevention and management issues to contribute to better long-term outcomes for athletes.

Today Begalle is helping to address problems with ACL injuries that threaten to unravel the lives of so many people, especially, girls and young women, who are more susceptible to such injury during sport in comparison to their male counterparts.

In addition to teaching, she explores the neuromuscular and biomechanical factors that may play a role in human movement disorders.

Begalle earned an undergraduate degree in athletic training from Canisius College in New York state and graduated from Plymouth State University in New Hampshire with a master of science in sports medicine. Immediately prior to coming to UNC for “the total package” (teaching and research), she was an athletic trainer and exercise science adjunct instructor at Skidmore College in New York. After graduating this May, Begalle will become an assistant professor in the athletic training education program at Illinois State University.

“There are really no good estimations of numbers of ACL injuries that occur annually. Reports range from 250,000 annually in the U.S. to two million worldwide. What we do know are the poor long-term outcomes associated with injury and reconstruction, which requires invasive surgery,” says Begalle.

Those outcomes, she adds, “lead to a lifetime of pain and dysfunction”:

Vigilance, education and intervention are needed more than ever. According to the North Carolina High School Athletic Association, 216,573 students participated in sports at the high school level during the 2011-2012 academic year. This represented a 38 percent increase in participation over the last decade.

“This is a conservative number for young people at risk for ACL injury in North Carolina because it does not include those participating in recreational sports or exercise,” cautions Begalle. “In fact, the majority of ACL injuries in sport are non-contact injuries. Movement patterns are the problem, and we all make movements that could be self-injurious. That’s why this is also a public health education issue.”

Begalle, who’s often invited to speak publicly about her work, has found that parents and physicians are very open to this information­. Coaches, on the other hand, can be a harder sell as time spent focusing on injury prevention cuts into limited practice time. She’s also the first to acknowledge “there’s much we know about ACL injuries and much we don’t know.”

“Awareness is a big part of dealing with these problems. But we also have to remember that injuries are an inherent risk with sport participation, so we need to continue to improve our management of these injuries as well,” she says.