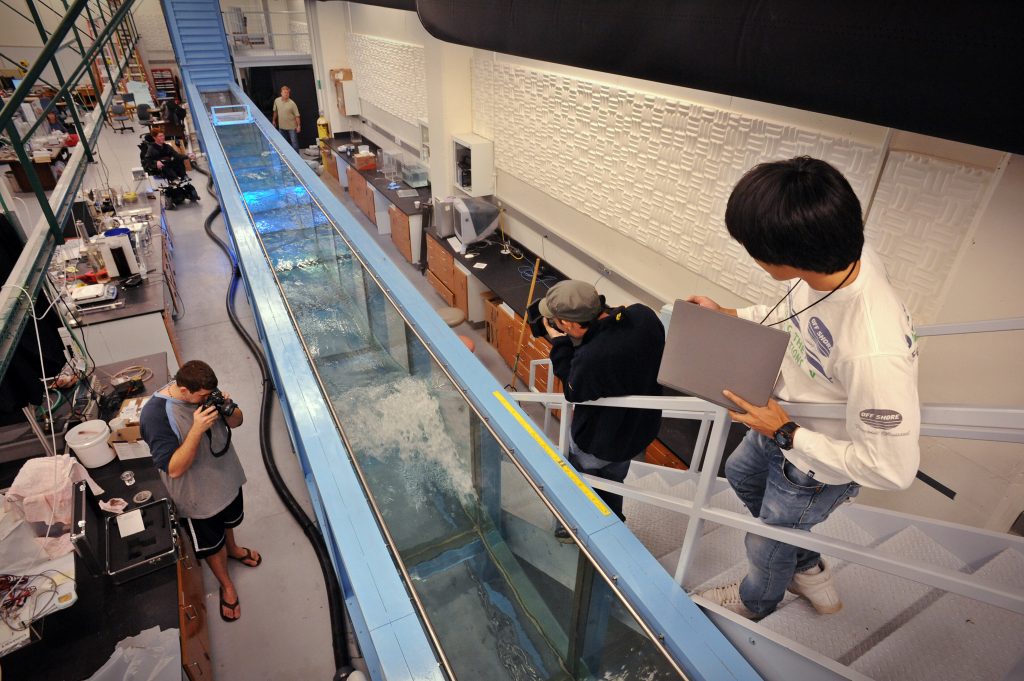 UNC scientists say the installation of a new wave tank generator in Chapman Hall will help them to do groundbreaking research. (photo by Dan Sears)

No one makes waves like Leandra Vicci. An engineer, Vicci is designing a device to create gravity waves in the wave tank in Chapman Hall using blowers and vacuums. The pneumatic wave generator will allow the multidisciplinary team of researchers she is part of to conduct experiments that test theories on such phenomena as rogue waves, tsunamis and internal waves that affect the ecological health of estuaries.

“It’s a wacky idea that I hope we can make work,” Vicci said. If all goes as planned, “UNC will have research capability that is groundbreaking in its field.”

The wave tank, able to stratify layers of saltwater and freshwater, is coming into its own thanks to a number of competitive grants. The three-chamber tank, which holds up to 13,500 gallons of water and is 27 feet deep, 2 feet wide and 120 feet long, was completed in 2010. A saltwater filtration system was added to the tank so its water could be reused. Toward the end of 2012, a computerized bobber-type wavemaker that moves up and down to make controlled internal and surface waves was installed. Internal waves are one of the the most common types of wave motion in the ocean; they are responsible for driving currents, dissipating tidal energy and distributing biomatter or pollutants. 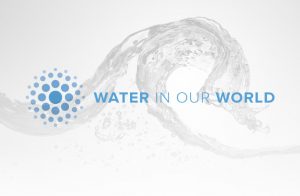 Few completely optically accessible wave tanks this large exist around the world, and Vicci’s generator will propel UNC’s fluids lab to rock star status by enabling researchers to use an exquisite degree of finesse in controlling wave-making parameters in both time and space. The fluids lab team will be able to replicate real-world phenomena in a controlled laboratory environment and precisely measure energy transfer.

Vicci’s device will enable the creation of a much more complex wave in space and time than could be created by the computerized bobber.

The experiments they will be able to do could be used to understand when and where damaging rogue waves might appear, study the feasibility of harvesting energy from waves, understand the effects of dispersants used in cleaning up an oil slick, and understand the vortices created when water rushes from a narrow channel into a wide space (think of the ship spinning in the Japanese harbor after the tsunami).

“We will be able to [create or] excite waves that would be impossible to excite if we didn’t have this capability of distributing the flow rate over space,” Vicci said.

Elaine Monbureau is a graduate student who studies the flow around individual blades of sea grass that sprout in estuaries and inter-coastal areas and prevent erosion. The wave tank was a factor in her decision to study at UNC. The gravity currents she examines can’t be replicated on a small scale. Having a large system was crucial to observing the fluid dynamics.

She presented her results at a conference last winter and drew tremendous interest from other researchers.

“I don’t know anyone else doing these types of experiments in this size tank,” she said. “I get fascinating images that allow people to see how cool fluid science is.”

“Water in our World” is a two-year academic theme adopted by the University. For more information, visit http://watertheme.unc.edu.