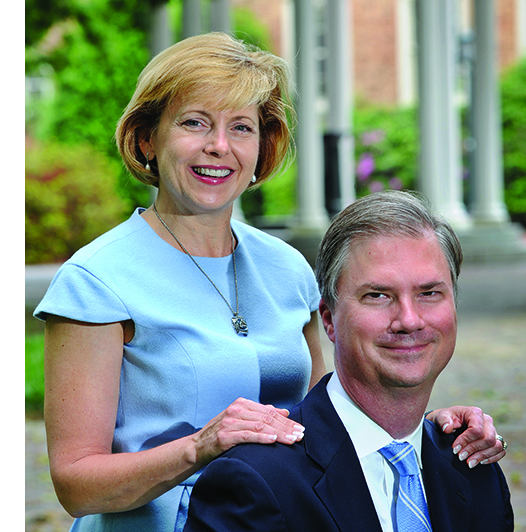 Thank you, Holden and Patti

After spending much of their adult lives in Chapel Hill, Holden and Patti Thorp are heading to St. Louis this summer. Effective July 1, Chancellor Thorp will be provost of Washington University there, where he also will hold an endowed professorship with appointments in chemistry and medicine.

“Holden has strengthened Carolina and the College in many ways over the past two decades,” said Karen M. Gil, dean of the College of Arts and Sciences. “He has been an inspiring teacher, scientist and leader. Patti has been a tremendous asset to all aspects of the University’s mission and her support for the arts has made a visible difference. I value their friendship and am grateful for their outstanding service to our entire community.”

Thorp graduated from Carolina with a B.S. in chemistry in 1986. After earning his doctorate at California Institute of Technology, doing post-doc work at Yale and teaching at N.C. State University, he returned to Carolina in 1993 to join the chemistry faculty. An entrepreneurial scientist with a dozen patents and many publications, he served as chair of the chemistry department and dean of the College of Arts and Sciences, before moving up to the Chancellor’s post in 2008.

Under his leadership, Carolina rose to national top-10 status for federal research and development funding and set new records in private fundraising and admissions. He launched Innovate@Carolina, inspiring innovative teaching, research and engagement across the College and the entire campus.

Patti Thorp met her future husband through community theater in Fayetteville and has been a supporter of dramatic arts throughout her life. At Carolina, she has chaired the Friends of PlayMakers Advisory Council, inspiring new support for the College’s nationally recognized repertory theater. As Carolina’s official co-host-in-chief, she has been an instrumental partner in strengthening many academic and community initiatives. She’s also a famously passionate Tar Heels fan. The Dean Smith Center won’t be quite the same without Patti.

“We will miss Holden and Patti, but we wish them the very best for the next exciting chapter in their lives,” Gil said.