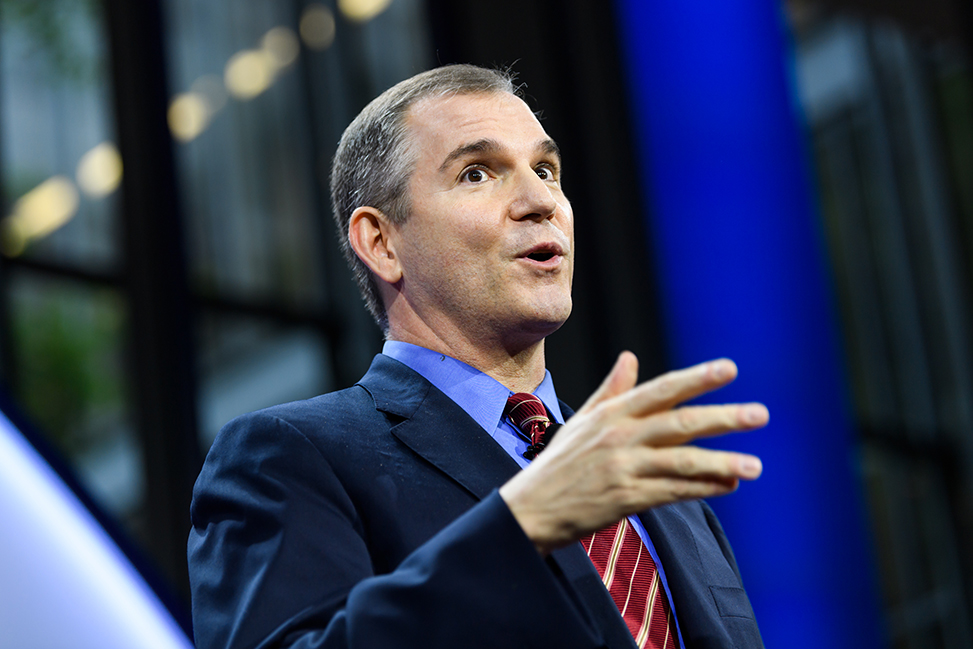 New York Times columnist Frank Bruni said the caliber of Carolina's faculty made it an ideal place for his curiosity and intellectual ambition to take flight. (photo by Mike Cohen)

He’s been a war correspondent. He’s covered popes and presidents. He’s written about AIDS and sexual abuse. He made New York restaurateurs blanch as the food critic for The New York Times. It all began for Frank Bruni (English ’86) at The Daily Tar Heel, reviewing obscure rock albums and penning a personal column.

Bruni’s peripatetic writing interests are highly unusual even for a journalist at a large newspaper, where rotating from one beat to another is common. But few reach the pinnacle Bruni has: anchoring one of the Times’ most important op-ed columns, covering politics, social education and culture.

“I was always very fond of writing. It became my sort of social center of gravity,” he said.

Bruni recalled recently about how he immersed himself in the campus newspaper, working his way up to associate editor.

A native of White Plains, N.Y., and a Morehead Scholar, Bruni graduated Phi Beta Kappa, then got an M.S. in journalism from the Columbia School of Journalism before taking a job at the New York Post.

Then, at the Detroit Free Press, Bruni covered the AIDS crisis, gay rights and the first Persian Gulf War. In 1993, he was a runner-up for the Pulitzer Prize in feature writing for his profile of a convicted child molester and co-wrote his first book, A Gospel of Shame, about child sexual abuse and the Catholic Church.

Bruni was hired by the Times in 1995 as a religion writer but later moved to Washington, D.C., to cover politics and George W. Bush’s 2000 campaign, which spawned his next book, Ambling into History: The Unlikely Odyssey of George W. Bush. From there, Bruni was off to Rome as its bureau chief, covering Italy, the Vatican and Greece. In 2004, he was named the Times’ chief restaurant critic.

“It was a total adventure, it was absolutely a dream job, but it’s a job that if your interests are as varied and as fickle as mine, ultimately begins to feel a little bit confining,” Bruni said. During this time, he authored Born Round, a memoir of his family’s love of food and his struggles with overeating.

Today, Bruni pens two columns each week as well as a weekly newsletter that’s emailed free to subscribers. Bruni said he prides himself on being able to write about topics that capture his desire to be nimble and “broad in my interests and surprising in what I write.” Recent favorites? “The Best Restaurant if You’re Over 50” and “Oh, to Be Ivanka!,” a humorous piece about Ivanka Trump.

“What I try to do is span that sort of spectrum, to be different enough that readers don’t think, ‘Oh, here he goes again,’” Bruni said.

Along the way, Bruni has also written and co-written other books, including a bestseller on the mania surrounding college admissions, Where You Go is Not Who You’ll Be.

Bruni said the caliber of Carolina’s faculty made it an ideal place for his curiosity and intellectual ambition to take flight. He has returned to campus to meet with Morehead-Cain Scholars and to speak on topics ranging from digital technology to the Balkanization of news, political polarization, popular culture, education reform and the future of LGBTQ rights.

Last year, Bruni wrote a deeply personal column about an affliction causing him to lose vision in one eye and what it’s like to live with the fear that the other eye could be similarly affected at any time. His latest book will focus on the challenges of aging for his generation, including insights from his own health battle.

Bruni continues to get emails from readers who share their own medical struggles and said their responses have helped him to be more empathetic.

“It’s something I didn’t understand nearly as well two years ago and I’m glad I understand it now,” Bruni said. “Because, when in the span of a couple days you’re told you might go blind, you really think about your life in a different way.”

Read and listen to a Sept. 17, 2019 WBUR Boston radio interview with Frank Bruni about blindness, writing and empathy.