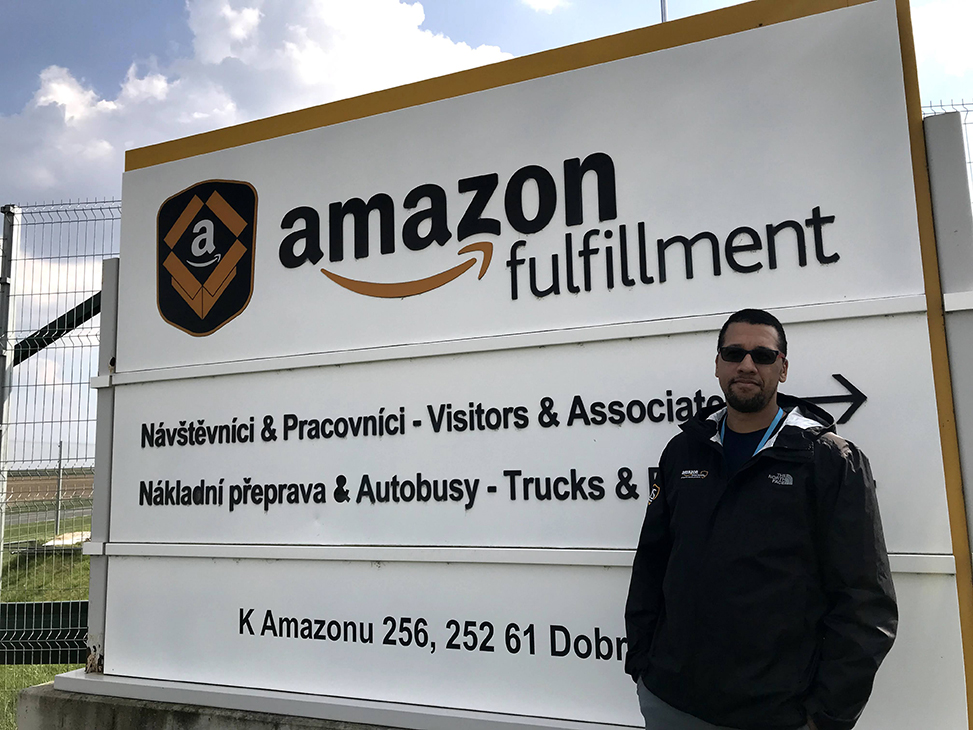 Hakeem Smith at the Amazon Fulfillment Center in Dobrovíz, Czech Republic, about 10 minutes from the outskirts of Prague. (courtesy of Hakeem Smith)

Hakeem Smith is a lifelong learner, bridge-builder and problem-solver. During a recent virtual global career session, he gave UNC students advice that has guided him through college and into a plum job at one of the world’s most recognized brands.

“Resiliency is a muscle that you have to exercise and develop, particularly if you are in globally focused careers,” said Smith, who received an undergraduate degree in anthropology in 2005. He went on to complete the TransAtlantic Master’s Program in 2013. “Put yourself in situations where maybe you have a lot less information than everyone else in the room. You will get through to the other side … and once you do, you will have gained more knowledge about the subject.”

Smith, a native of Statesville, North Carolina, has lived and worked in Europe since 2012. He’s currently a business analyst at Amazon in Prague, where his work combines data science and qualitative research to help Amazon maintain a secure online shopping experience.

Before that, he was a researcher and international project coordinator for the Czech Helsinki Committee, a nongovernmental organization focusing on human rights.

Working in an international city for one of the fastest-growing companies in the world is a testament to Smith’s resilient spirit.

“Amazon is all about being as optimal or the best as quickly as possible, so high-quality, high-speed and high-veracity all have to happen concurrently,” Smith said. “I’m a sucker for a challenge, and Amazon will challenge anyone. There is a new complex problem to solve every day.”

As an undergraduate, Smith gravitated toward anthropology after a class on post-Colonial Africa. “Growing up as a Black man in North Carolina, I was really interested in the diaspora, and that class really led me to take anthropology seriously.”

After graduation, Smith spent a few months in Bratislava, Slovakia, to be with his then-fiancé (now wife), who was from Slovakia. He then returned to the United States and worked as a broker trainee with Fidelity, managed hotels, ran a consulting business with UNC alumni and edited an academic journal.

But Smith said his European trip made him want to better understand the cultural changes underway, particularly with the European Union, and that’s when he pursued an M.A. in political science from the TAM program. Established in 1998, the interdisciplinary program focuses on contemporary Europe and the transatlantic relationship.

“I grew up at the end of the Cold War era and hadn’t really studied it before,” Smith explained.

During the program, Smith spent a semester at Charles University in Prague studying comparative Central European politics and another at the University of Bath in the United Kingdom, where he focused on international security.

Smith joined Amazon in 2016. His first job involved mining data to find areas in which the network was losing money, through everything from employee warehouse theft to people who “game the system” by doing things such as selling counterfeit phones. In his next role, he used data analysis to evaluate the company’s loss prevention and security training. Today, he’s helping find, build and optimize tools and products related to Amazon’s training programs.

Smith stays in touch with his Carolina network and is proud to call UNC-Chapel Hill his academic home.

“That place is very special to me. It allowed me to try new things and to fail without being a failure,” he said. Smith works hard to connect TAM students and alumni to internships and other positions. “I’m really about forging those connections. I see myself as a bridge-builder.”

Smith recently completed an online business analytics certification program from Harvard Business School. Next, he plans to delve deeper into data science by getting a certificate in data operations.