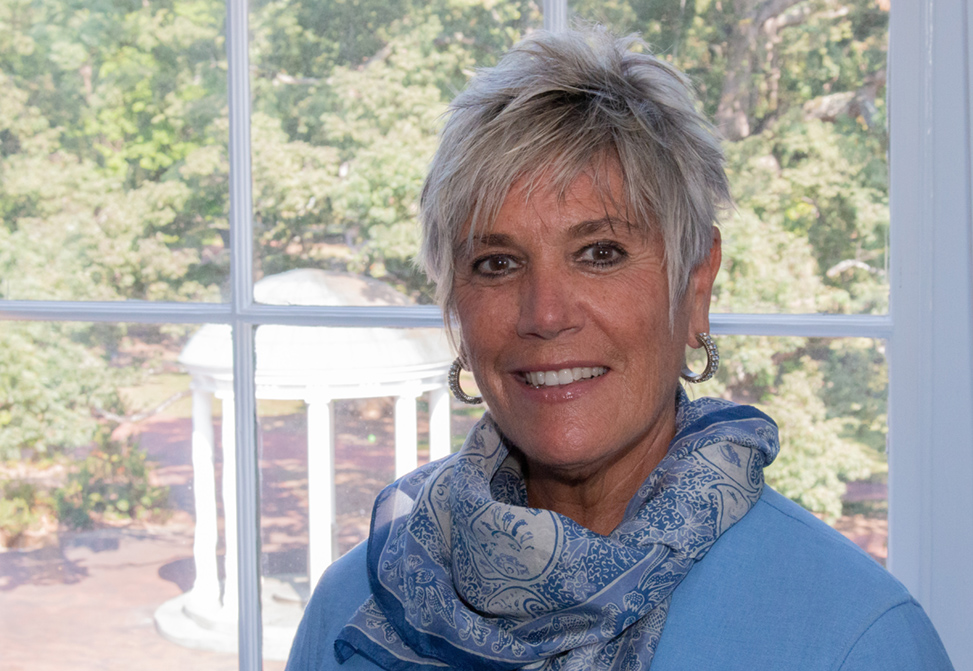 Rhodes, who had served as interim dean since February 2019, became dean of the College of Arts & Sciences on March 1 (photo: Kristen Chavez). 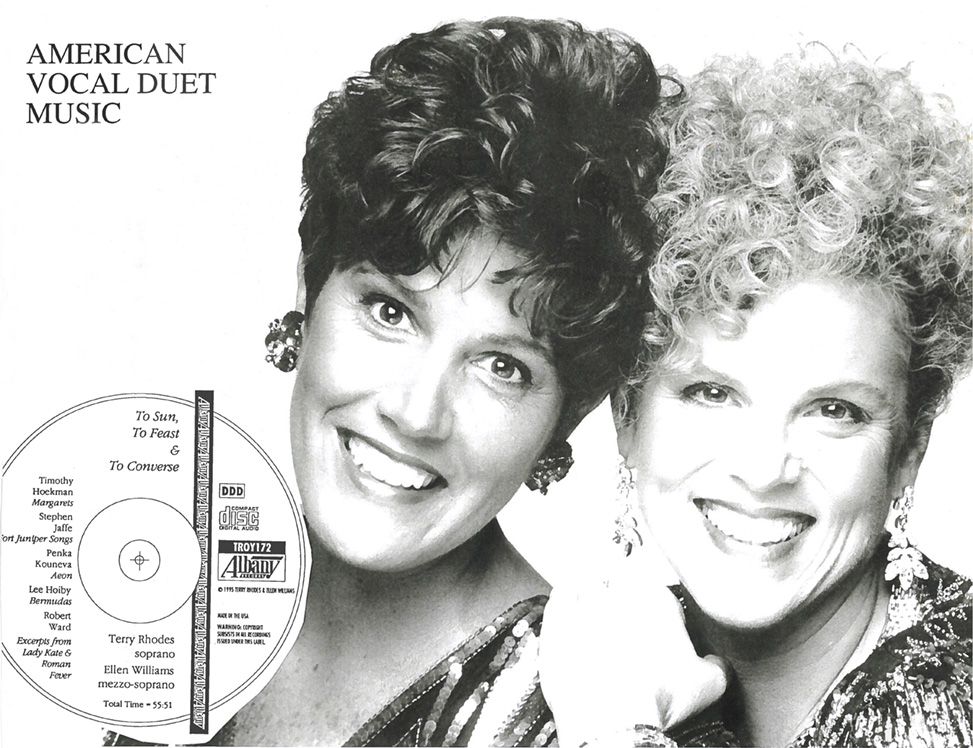 Promotional poster for Rhodes’ 1995 CD To Sun, To Feast & To Converse (image courtesy of Terry Rhodes). 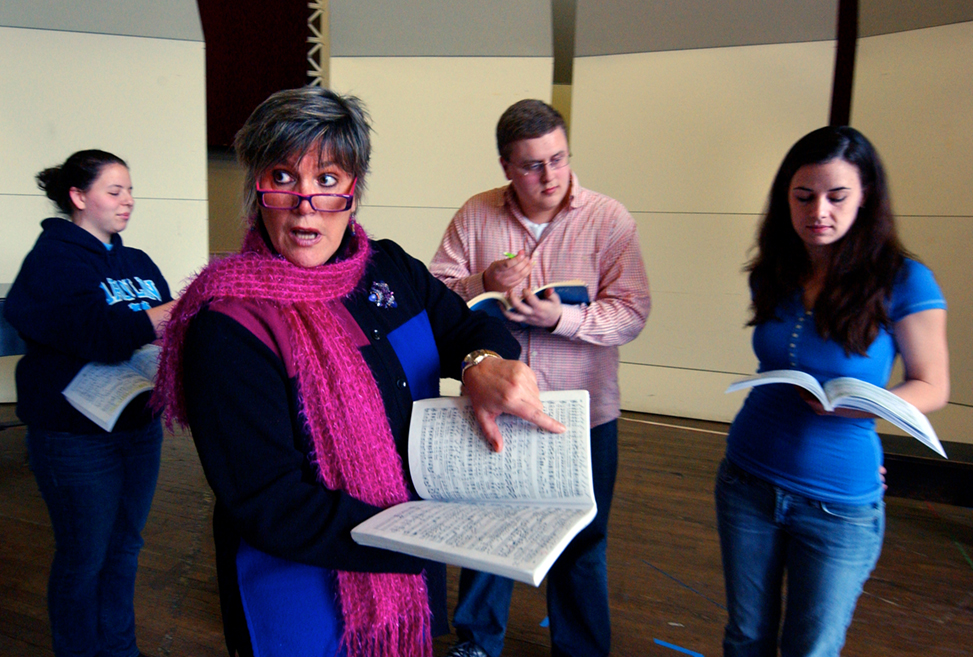 Rhodes, shown in 2012 directing an opera workshop, was the director of UNC Opera from 1987 to 2012. She became chair of the music department in 2009 and senior associate dean for fine arts and humanities in 2012 (photo: Donn Young). 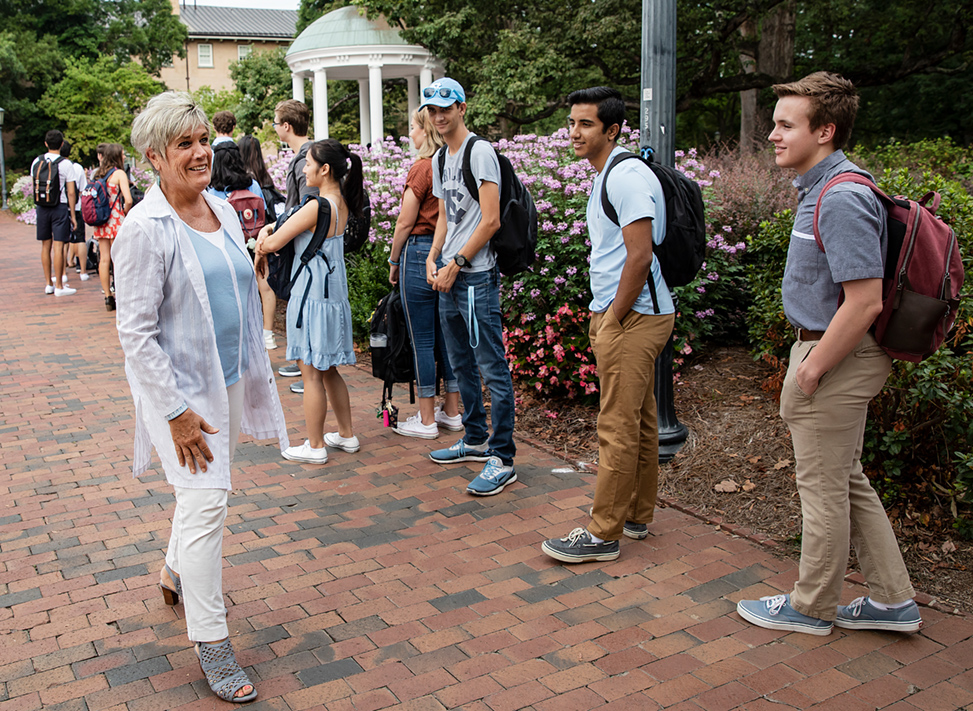 Rhodes greets students lined up for their sip from the Old Well on the first day of classes in fall 2019 (photo: Johnny Andrews).

Terry Rhodes is handed the baton

Brava! to the new dean of the College of Arts & Sciences, a 1978 alumna who has spent most of her academic career at Carolina. 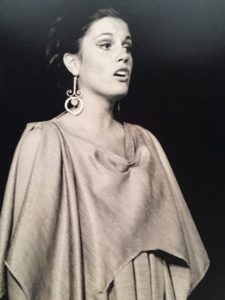 Rhodes performs in summer stock in Cape Cod, Mass., while a sophomore at Carolina.

These are musical terms readily understood by Terry Rhodes, soprano and music scholar. But they also have meaning for her as the new dean of the College of Arts & Sciences. Those who have worked with her praise her highly collaborative nature, her ability to bring people together, her gift for listening closely and her capacity to see the big picture as she works through the matter at hand.

Rhodes also has insights from what it’s like to be a Carolina student today — her daughter was a Kenan Music Scholar who graduated in 2019.

When Dean Kevin Guskiewicz, Karen Gil’s successor, was named interim chancellor of UNC-Chapel Hill in early 2019, he and Provost Bob Blouin appointed Rhodes interim dean of the College. A year later, both Guskiewicz and Rhodes received permanent appointments and have removed the “interim” from their titles.

“Terry has been an inspiring and strategic leader in the College for many years and has effectively led as interim dean this past year,” Guskiewicz said. “She has long been a champion for diversity, interdisciplinary collaborations and bridging silos. Terry is truly ‘a Tar Heel born and bred,’ with a deep abiding love for Carolina, and she will bring continued success to the College.” 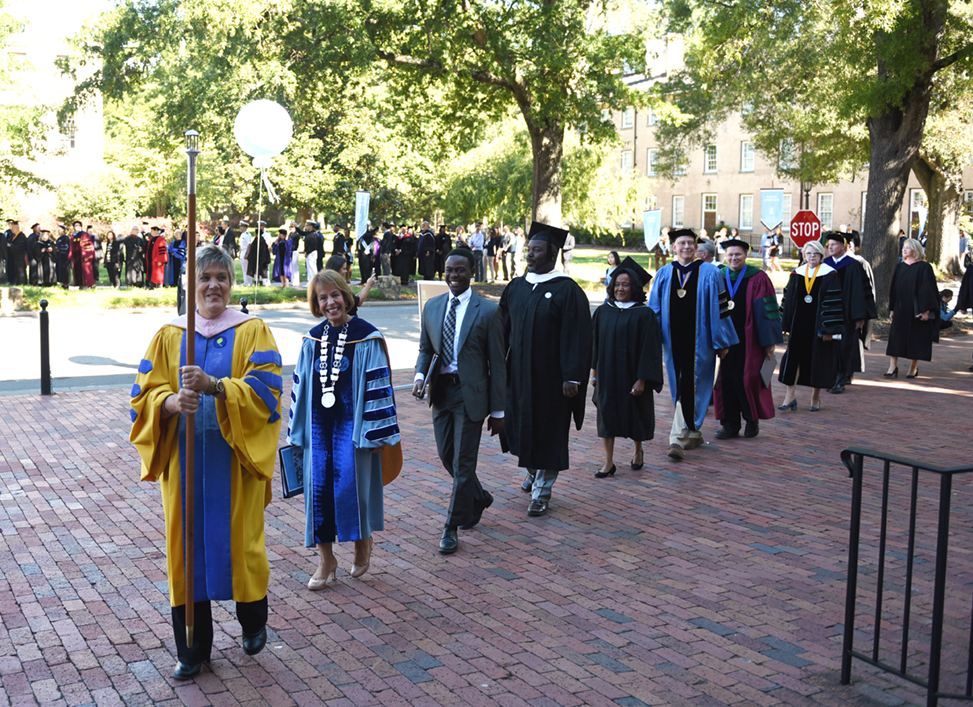 Rhodes served as the University’s faculty marshal from 2015 to 2019. (photo: UNC-Chapel Hill).

The Carolina of Rhodes’ college years had no knowledge of Michael Jordan — he would arrive three years after she graduated in 1978. The libraries still had card catalogues. Students registered for courses by standing in line in Woolen Gym. The men’s basketball team played in Carmichael Arena and PlayMakers Repertory Company was the new kid on the block. Rhodes, a voice and piano major, practiced and performed in an un-air-conditioned Hill Hall.

After graduating with a bachelor of music, she went on to earn master’s and doctoral degrees from the University of Rochester’s acclaimed Eastman School of Music. Shortly thereafter, in 1987, she joined UNC’s music faculty.

In 1993, a Fulbright artist-in-residence award sent her to Macedonia, where she taught classes and performed throughout the Balkans and Eastern Europe. Since then, she has performed across the United States and in more than 20 countries throughout Europe and Central and South America. Her Dean’s Office duties have not prevented her from returning to Spoleto, Italy, most summers since 2003 to teach voice classes, direct choral groups and perform.

Rhodes is the first dean of the College to come from a fine arts discipline, and throughout her career she has been a fierce advocate for the arts and humanities as an essential component of a well-rounded Carolina education. In 2016, as senior associate dean, she chaired the yearlong Carolina’s Human Heart: Living the Arts and Humanities initiative. Two years later, she became the principal investigator of a four-year $1.5 million Mellon Foundation grant, Humanities for the Public Good.

In her year as interim dean, she oversaw several new initiatives, including:

Rhodes has also proved to be an effective fundraiser. During her year as interim dean, the College raised more than $122 million in For All Kind: The Campaign for Carolina, including a $25 million bequest for graduate student support.

One of her major priorities in the coming years will be to implement IDEAs in Action, the University’s new curriculum. It goes into effect in fall 2021, with core concepts being pilot-tested now. Faculty diversity is another major priority, and one for which Rhodes has long been active. She received a University Diversity Award in 2011.

“I’m deeply honored to be following in Kevin’s footsteps as dean,” said Rhodes. “The College is where students come to get an arts and sciences education that is both broad and deep. Our faculty are world-class, our staff unrivaled in their dedication to this place. The College may be Carolina’s oldest school, but we are focused firmly on the future and all that we can accomplish by working together.”