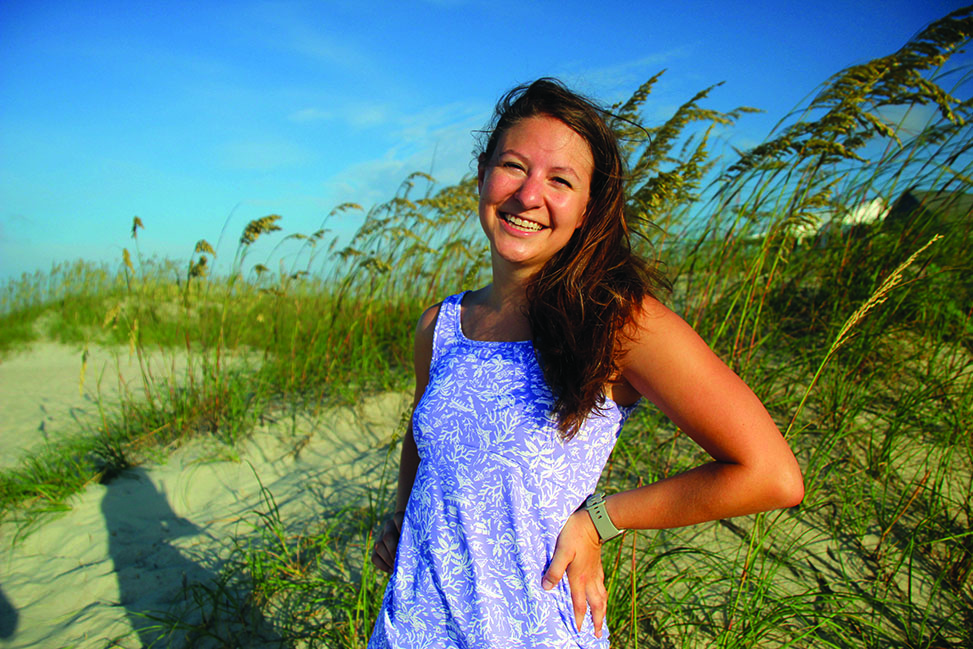 Anna Atencio uses the leadership skills gained in the Chancellor’s Science Scholars program and her love of geological and marine sciences in her work with Geodynamics. (photo by Brooke Wheatley)

Anna Atencio was a member of the first Chancellor’s Science Scholars cohort. Now she helps tell the unseen story below the seafloor as a geophysicist on the coast of North Carolina.

“At the time, I was pretty set on NC State for engineering,” she said. “But after receiving the CSS scholarship, and talking with my parents about the financial support, they encouraged me to accept. It definitely turned out to be the right choice.”

Atencio was excited to experience all that the program had to offer: community-building, leadership opportunities, research and internship guidance, professional development and more.

What she didn’t realize at the time was how quickly she would give back to the program.

“As part of the CSS program, you have to major in one of the hard sciences,” she said. “Throughout that first summer, they encouraged pursuing a major in math, chemistry, physics or biology. But none of them really spoke to me.”

She wanted a major that offered smaller classes and a tie to her love of the outdoors. Geological sciences seemed promising, and, after consulting with CSS leaders, they agreed. It was added to the approved major list.

Her major eventually led Atencio to both her mentors, Brent McKee and Antonio Rodriguez, who guided her research at Carolina.

McKee, a researcher of land-ocean interactions and global change in the College’s department of earth, marine and environmental sciences, introduced Atencio to his lab in Chapel Hill focused on studying fluvial systems –– habitats dominated by rivers and streams. Atencio worked in McKee’s lab during the school year and, in the summer, spent her time at UNC’s Institute of Marine Sciences in Morehead City, North Carolina, with the Rodriguez lab, collecting and analyzing sediment core samples from marshes.

Her undergraduate research experience in both labs was a natural foray into graduate studies in marine sciences at UNC.

After finishing her master’s, Atencio moved to Charleston, South Carolina, to guide kayak expeditions, a way to leverage her love of continuous learning, teaching and coastal research expertise. While she was guiding, she asked her network of researchers, scientists and friends to recommend organizations that had the same opportunities for learning, collaboration and growth that CSS had provided.

A friend introduced her to Geodynamics, a coastal surveying company that uses cutting-edge technologies to provide clients crucial information to safely and effectively pursue projects in and around beaches, shallow waters and the continental shelf. They emphasized an “always learning” company culture that spoke to Atencio immediately, and she moved back to Morehead City for the job.

Now in her third year with Geodynamics, Atencio leads a team in the geophysics department. The role requires a breadth of skills: collecting and analyzing data from surveys of the coast, project and people management, client relationship-building and above all –– perhaps surprisingly –– storytelling. It is Atencio’s job to take data from below the seafloor and tell the unseen story of the ocean so her clients can make informed decisions about their project, which could be anything from nourishing eroding beaches with sand to laying cables for wind farms.

For someone who enjoys teaching as much as she enjoys learning, the position has been a perfect match, and Atencio said Geodynamics is a place where she can continue to grow.

“This place really pushes me to do my best and to think outside of the box,” she said. “And because of that, I feel a lot of pride and ownership. I absolutely love it.”