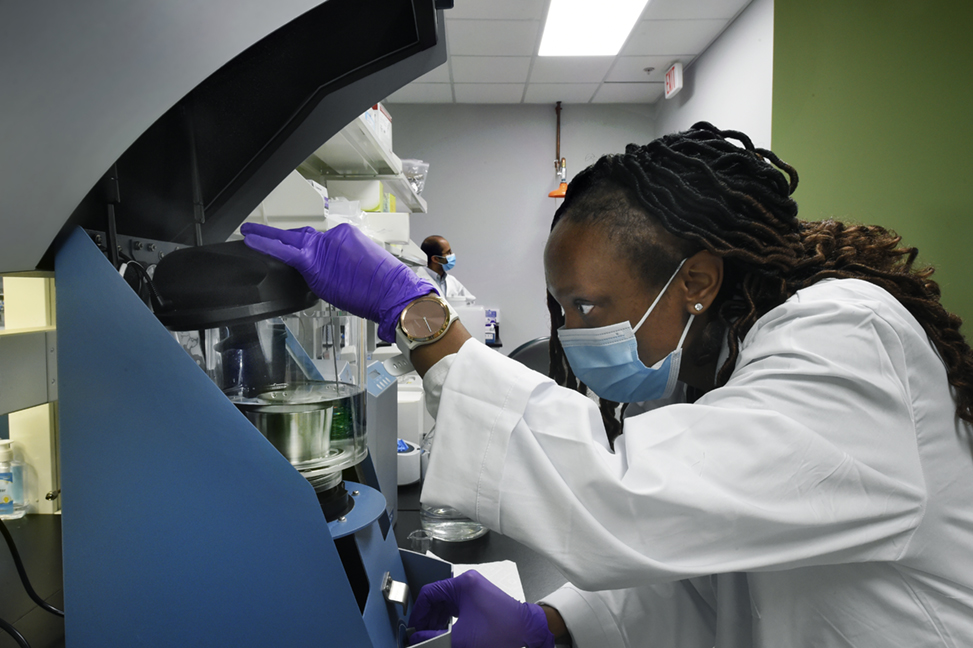 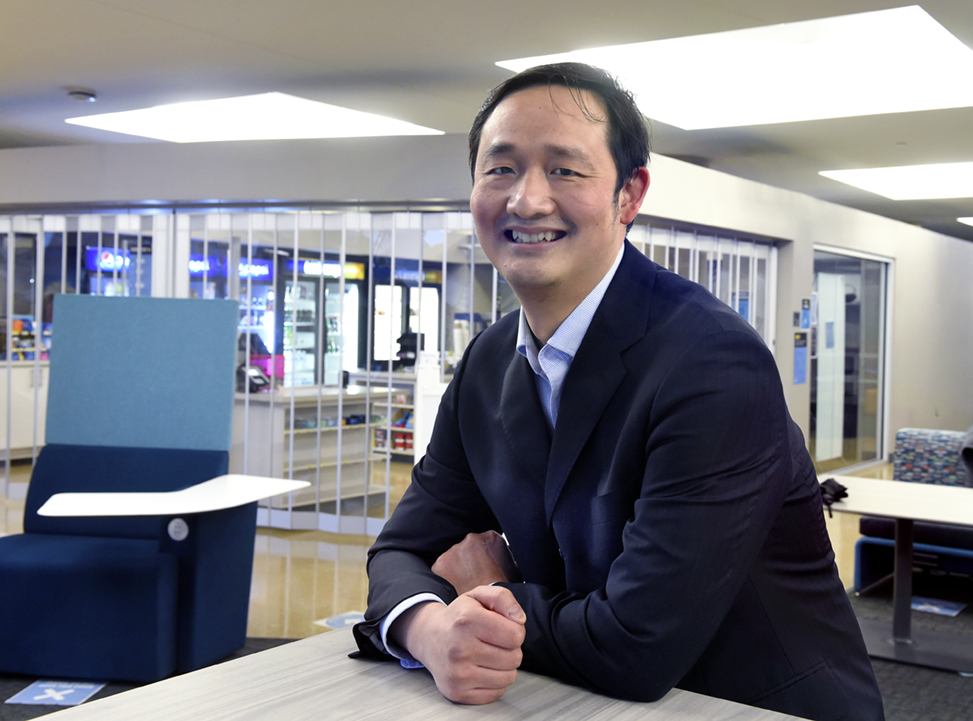 Jinsong Huang in the Convergent Commons space in the Genome Sciences Building. (photo by Donn Young) 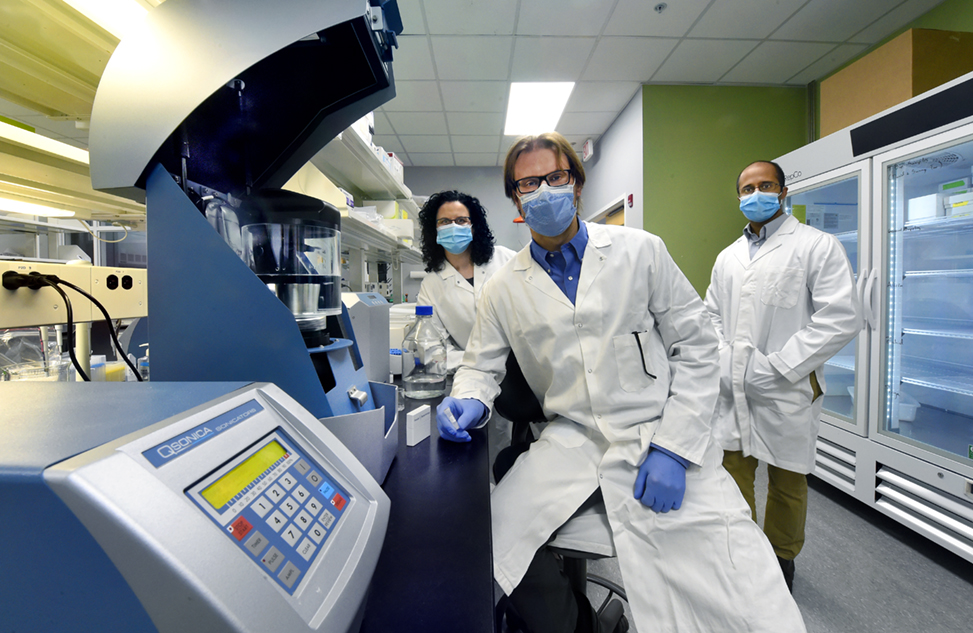 While many established businesses slowed down at the onset of the pandemic last year, startup ideas at UNC-Chapel Hill got a boost from a new program called the KickStart Accelerator.

Two life sciences ventures recently founded by College of Arts & Sciences professors, Perotech Corp. and Triangle Biotechnology, embody the University’s culture of supporting faculty who have ideas with the potential for commercialization.

Both companies have benefited from the accelerator, part of a pilot program for the Institute for Convergent Science in the Genome Sciences Building. The accelerator mobilizes diverse teams of researchers, designers, entrepreneurs and others.

Perotech seeks to develop a next-generation medical imaging device. Triangle Biotechnology is developing products and equipment that labs can integrate seamlessly to save time and costs for processing biological samples.

Founders from both startups say they never dreamed of starting their own businesses — until suddenly they saw no reason not to.

Triangle Biotechnology was born from scientists seeking a shortcut at the lab bench 10 years ago.

Samantha Pattenden, an associate professor in UNC’s Eshelman School of Pharmacy, was experiencing a common problem: breaking up DNA. A necessary step to prepare samples for next-generation genomic sequencing, this is typically achieved with ultrasound or enzymes.

Next-gen sequencing is used for large numbers of samples containing genetic material — say, saliva collected in tubes from people curious about their ancestry — and these are processed en masse, by a sequencing instrument. But for this technology to work, the DNA in the samples must first be broken up into very short, uniform segments, a feat that has proved stubbornly hard.

One of the technicians in Pattenden’s lab had heard that another UNC lab — run by Paul Dayton, a professor in the department of biomedical engineering, a joint program with NC State University — used microbubbles for a similar problem. Dayton’s work investigates ultrasound for clinical imaging and diagnostics, and microbubbles are frequently used as a contrast agent. The lipid-shelled, 1-micron gas-filled spheres wiggle and vibrate in the presence of high-energy acoustic waves.

“We were using the microbubbles therapeutically and for imaging of various body parts, but it turns out they can also, by the same mechanisms of vibration and mechanical agitation, help the problem that Sam was having,” Dayton said.

The pair collaborated and improved the efficiency by miniaturizing the microbubbles into nanodroplets — five to seven times smaller and filled with a liquid core instead of a gas — that sheared DNA into short, uniform segments of a predictable length when exposed to high-energy sound waves. They eventually obtained two patents related to this technology.

“I was encouraged when one of Sam’s colleagues at the University started using the nanodroplets too,” Dayton said. “I thought, ‘wait a second; others at UNC want this technology, so clearly there’s a desire for it.’”

Though the pair were interested in launching a company, they did not have the expertise. They were connected to Joe McMahon, a businessman who had previously directed several biotech companies, and who became a co-founder and, later, Triangle Biotechnology’s CEO.

Today, the company’s main product is the nanodroplet reagent for biological samples, an innovation that simultaneously shreds 96 DNA samples in 10 minutes. Their biggest competitor takes two hours to process that number of samples.

“Nanodroplets eventually ended up having a large market for us. Once we started doing customer interviews, we realized there were so many applications for this apart from just shearing the DNA,” Kasoji said. Soon they were developing and marketing the nanodroplets to also break up tissues, bacteria and plants.

In early 2021, Triangle Biotechnology moved out of the KickStart Accelerator space that it had occupied for a year and into space in Research Triangle Park.

Kasoji, who was Dayton’s graduate student and performed research on the nano-droplets, said that when he was a student, he thought startups were too risky for employment right after graduate school.

“But it’s been a great experience for me to see my research through to the ultimate end,” he reflected. “I consider myself very lucky and I’ve caught the bug. The startup space is where I want to be.”

Imagine a portable medical imaging device that is flexible enough to wrap around injured limbs or brought to patients who can’t be easily moved. Now imagine that the radiograph this device makes has an image quality that is 100 to 1,000 times better than what’s currently on the market — all for a vastly lower cost.

That’s the vision of Jinsong Huang, founder of Perotech. Huang has researched a special material structure called perovskite for the past eight years. While characterizing its properties for solar energy applications — it has good electronic properties — he and his team discovered that it also works well for detecting X-rays.

“Perovskite has a good stopping power; it has lead inside which can stop or absorb X-rays efficiently, and we can see the X-ray photons,” said Huang, who is the Louis D. Rubin Jr. Distinguished Professor in UNC’s department of applied physical sciences.

Perovskite is highly sensitive to detecting X-ray photons, which means it can make more detailed images from a comparatively lower dose of radiation.

“If we can make the detector more sensitive, then we can dramatically reduce the radiation dose to the patient,” Huang said. “We can make X-ray imaging much safer for people.”

The lightweight, portable nature of his concept has many different applications. Hospital patients who are too unstable, or too infectious, to be moved to a common radiography room can have the new imaging device brought to their bedside. Soldiers injured on a battlefield could be treated by a medic who unrolls the bendable, compact device to image injuries on the spot.

Perotech moved into the KickStart Accelerator in 2020, and Huang credits the incubator with providing not just lab space and equipment but also advice on grants and accounting. Perotech has established proof of its concept, and the company plans to produce a full-sized X-ray detector prototype by 2023.

“I researched perovskite for eight years, and I was waiting for someone to commercialize my work,” Huang said. “Then I received calls from big companies saying they wanted to buy a product, and some asked me to make a product, so that made me think about it.”

Huang said he hesitated, but that he thought it was worth pursuing due to the big improvements of perovskite over existing materials.

“There is already huge competition in the industry to solve this problem, and there are strong market leads,” he said. “I will only see this opportunity once in my lifetime, and I really did not want to give this up.”