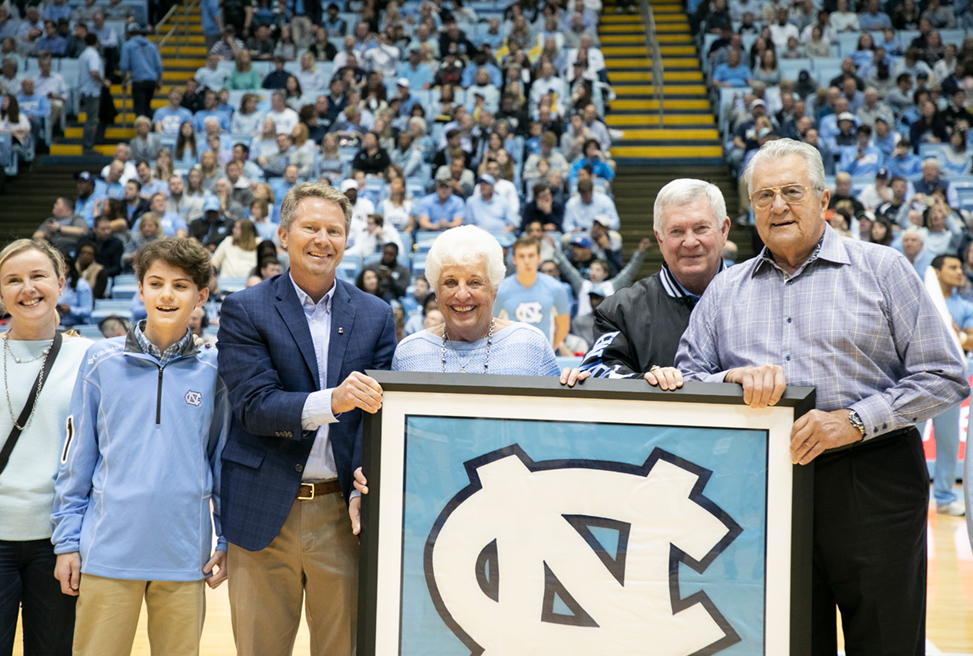 “The Stallings are among Carolina’s most generous supporters, and this gift builds on their remarkable legacy seen on our campus and in the lives of the people we serve,” Chancellor Kevin Guskiewicz said. “Our work in traumatic brain injury research and novel treatments has had a global impact because of the Stallings, and we are grateful for their commitment.”

The Stallings’ gift will support a 30,000-square-foot addition to Fetzer Hall, a multi-purpose academic research and sport facility. The new Stallings-Evans complex will allow the Matthew Gfeller Sport-Related Traumatic Brain Injury Research Center, which Guskiewicz co-directs along with Associate Professor of Exercise and Sport Science Jason Mihalik, and the Center for the Study of Retired Athletes to work side-by-side.  It will create much-needed space for growing research in areas such as sports vision science, active rehabilitation and novel diagnostics. The new complex also gets Carolina closer to its aspirations for a new clinical program that addresses the treatment of patients dealing with symptoms related to chronic traumatic brain injury and neurodegenerative disease.

The Stallings have long been champions of Carolina’s work in the fields of sports medicine and sport-related traumatic brain injuries. Their previous generosity provided space for the Gfeller Center to take root and become a national leader for sport-related and military brain injury research and its dissemination.

Carolina’s clinical concussion research began with a four-member research team but has expanded to 30 members who train future sports medicine researchers in diagnosing and treating brain injuries across the age spectrum, from pediatric patients to college students to retirees. The team has also been engaged in an eight-year-long clinical research partnership with the United States Army Special Operations Command on how to best care for Special Operations Forces combat and combat support soldiers who have sustained traumatic brain injuries.

In 2010, Don and Billie Stallings made the lead gift that created the Stallings-Evans Sports Medicine Center, and the new complex also will be named for them and their late son, Eddie Evans. Don, a member of the Carolina class of 1960, was a three-year football letterman and later played for the Washington Redskins. He is founder and CEO of Eagle Transport Corporation, and a past chairman of the Educational Foundation. He also has served two terms on the UNC-Chapel Hill Board of Trustees. Billie chairs the UNC School of Medicine’s cardiovascular medicine advisory board and has served on the UNC Health Foundation Board of Directors since 2014.

“We knew the center needed to expand, and we knew the University had a plan to do it, so we felt the time was right,” Don said.

Don and Billie’s son, Eddie Evans, was born with a congenital heart defect, which led to his premature death at the age of 41. To this day, he is considered a pioneer in open heart surgery, as he braved four life-threatening surgeries.

“Sports medicine was very special to Eddie,” Billie said. “He wanted to be an athlete, but his heart condition wouldn’t allow it. He was a student athletic trainer for all sports at the Arendell Parrott Academy in Kinston, North Carolina, and always said he was going to excel in sports medicine and win a scholarship to UNC–Chapel Hill. This complex is the perfect tribute to him, because of the wonderful work it will do in his name on behalf of what he loved.”

In addition to supporting sports medicine programs, the Stallings have funded numerous other areas at Carolina.

“Carolina has been good to us,” Don said. “We love the place and want to give back to it.”