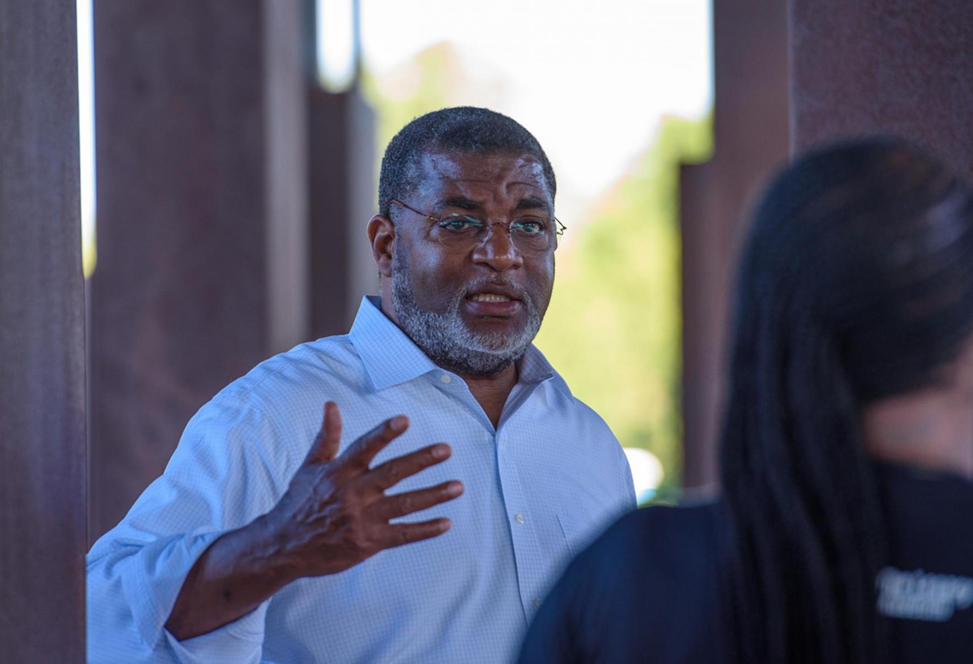 HOPE CEO Bill Bynum talks with a tour guide at the National Memorial for Peace and Justice in Montgomery, Alabama. (photo courtesy of HOPE) 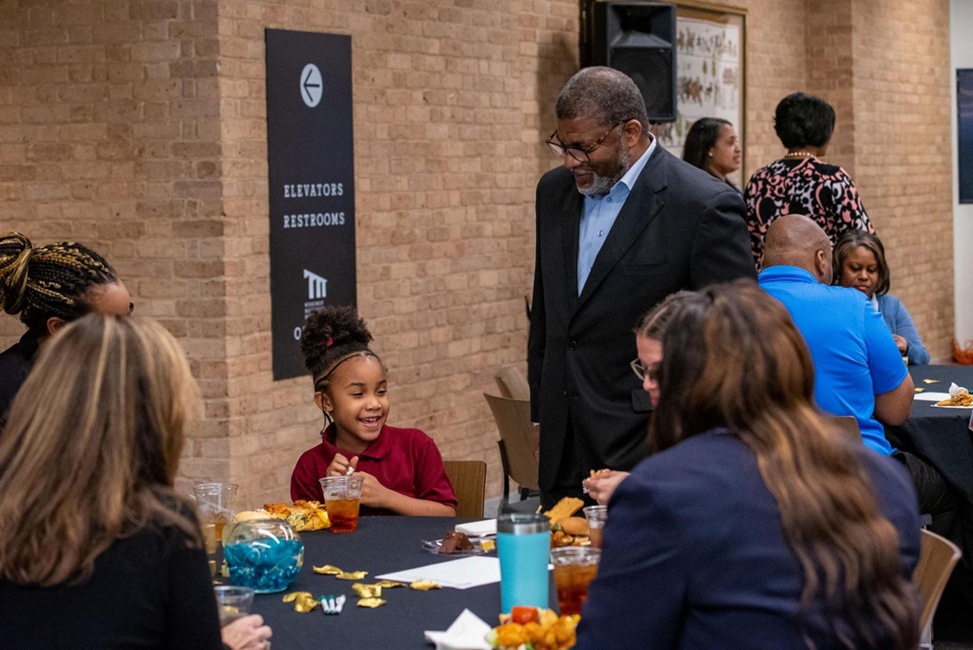 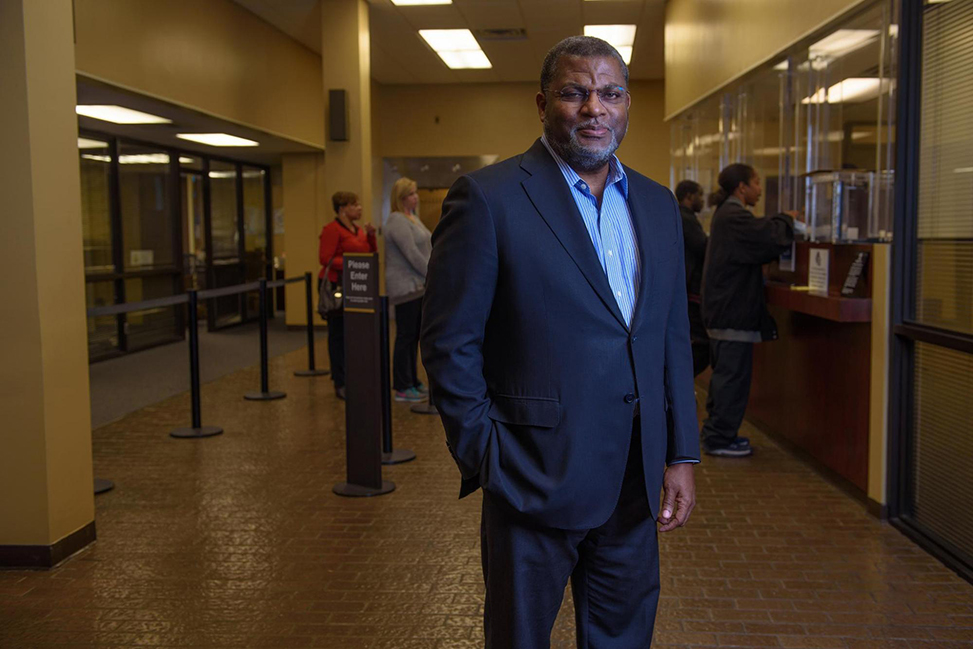 UNC alumnus William J. “Bill” Bynum leads a family of organizations aptly named HOPE that is working to strengthen some of the South’s most economically distressed communities.

As a young boy growing up in the small community of Bynum, North Carolina, William J. “Bill” Bynum recalls his grandmother taking him to a credit union that was based in a school vice principal’s garage. Years later, his grandmother would withdraw savings from that credit union to pay for the suit Bynum wore when he took the oath of office as chair of the Black Student Movement at Carolina.

Bynum has continued to live and breathe that ethos of neighbor-helping-neighbor throughout his career since graduating in 1982 with a degree in political science and psychology.

“My mother, grandmother and neighbors showed me that when people pool together their resources to help their neighbors, good things can happen,” Bynum said.

As BSM chair, Bynum learned valuable skills in leadership and negotiation as he worked to foster increased sensitivity to the needs of students and faculty of color.

“On my first day of office, we marched on South Building to express concerns that Dr. Sonja Haynes Stone had been denied tenure. I found myself on television as a young, wide-eyed undergrad,” he said. “I’m proud to say that ultimately that tenure decision was reversed. And today, the Stone Center on campus is named in her honor. It shows that action and commitment can make a difference.”

Bynum won a UNC Distinguished Alumnus Award in 2008. He returned to campus last year for the Southern Summit on Philanthropy and the Academy, a Southern Futures-sponsored event, where he told attendees that “people in these Mississippi Delta communities may be poor, but they are resourceful and resilient.”

“The more we listen to residents of these communities, the more we can target our services in a way that is most impactful,” he said. “People in the deep South have done more with less than almost anyone in the country. We are very intentional in asking them: ‘What would it take to improve conditions in your community?’”

When he first graduated from Carolina, Bynum helped to found Self-Help Credit Union in Durham, today one of the nation’s pre-eminent community development financial institutions. It all started, Bynum recalled, with a $77 deposit from a bake sale held by manufacturing workers.

After a stint at the North Carolina Rural Center, Bynum was recruited to help start the Enterprise Corporation of the Delta in Mississippi. By day, he was starting a $1.5 million loan fund to transform the region’s economy, and by night — well, the next part of the story took him back to the idea of that garage-based credit union in his North Carolina hometown.

“I joined a church in Jackson, and when I was talking to the pastor, he said he had been trying to start a credit union for some time as a way to provide an alternative to payday lenders, pawn shops and check cashers that dominated the neighborhood. And so Hope Community Credit Union was born.”

Eventually the two organizations merged and would prove critical to rebuilding efforts after Hurricane Katrina ravaged the Gulf Coast in 2005.

“We built some of the first homes on the Mississippi coast after Hurricane Katrina. That served as a model for the state that resulted in more than 10,000 families receiving $600 million to help rebuild their homes and lives. It was quite stressful on our staff, but we were well positioned to take on these challenges.”

In the years after Katrina, HOPE would weather the financial crisis of 2007-2008, and today the organization is tackling head on the financial challenges of COVID-19.

“Since the pandemic, we’ve rolled up our sleeves as we did after Katrina and the financial crisis, and focused on where we can be most helpful and add value,” he said.

For instance, HOPE is working with the Black Belt Community Foundation in Selma, Alabama, to extend bridge loans to municipalities so they can access federal funds to help their local economies recover.

A transformational $10 million deposit from Netflix will allow the credit union to invest capital in communities like Itta Bena, a town in the heart of the Mississippi Delta that is home to Mississippi Valley State University, a public, historically Black university.

Over the course of his career, Bynum has advised U.S. presidents on community development matters, but when he thinks of why he is passionate about his job, he turns to the future he is trying to build for his daughter, a chief obstetrics resident at VCU Medical Center in Richmond, Virginia.

“She’s delivered babies to moms affected by COVID-19, and at the same time she’s out there protesting for economic justice,” he said. “Today we are still fighting many of the same battles that Dr. King and John Lewis fought many years ago. I don’t have the time or the right to not be passionate about this work.”

Southern Futures: Cultural activism and the fate of Johns Island

Southern Futures: Voices of resilience and recovery in Robeson County

Poet Tyree Daye was featured in a Southern Futures podcast.