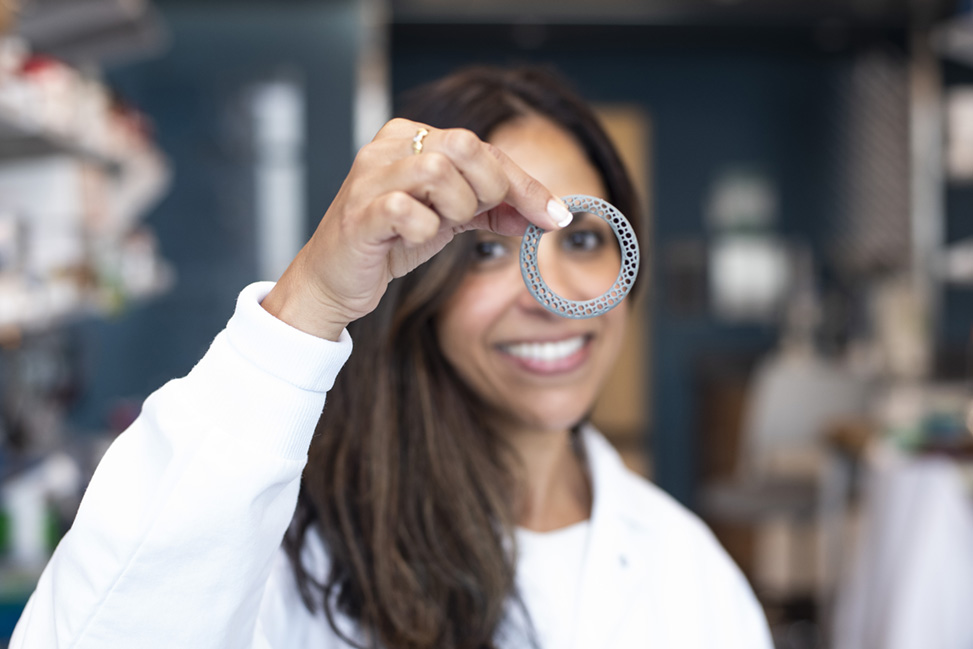 Rahima Benhabbour’s innovative medical devices have the potential to benefit marginalized women around the globe.

Listening to Rahima Benhabbour describe the research in her lab feels a bit like peering into the future of medicine – are these things already possible?

“We focus on developing polymer-based devices that can go into the human body,” Benhabbour said. “The challenge is to make them feasible and bio-compatible.”

Take the patented hydrogel, for example. Made of all-natural polymers, this novel substance was developed by Benhabbour and her team to be used in regenerative medicine applications — from regrowing bones to treating cancer.

Benhabbour, an assistant professor in the UNC-NC State joint department of biomedical engineering, says her career in developing drug delivery systems stems from a lifelong love of chemistry.

In grade school, she enjoyed the problem-solving components of her math and science classes, but chemistry quickly became her favorite subject.

“I loved the making of chemistry,” Benhabbour said. “It was all passion from day one.”

Born and raised in Algeria, Benhabbour grew up listening to her father, a geologist, talk about earth science. After high school, she attended the Algerian Petroleum Institute, where she earned a degree in engineering. She came to the United States to pursue a master’s degree in chemistry, completed her Ph.D. work in Canada, and then joined the UNC Eshelman School of Pharmacy in 2011 as a postdoctoral fellow.

Going into pharmacy was a departure from the “traditional” career path for a Ph.D. chemist.  But Benhabbour knew she was in the right place.

“They were experts in drug delivery — making platforms I hadn’t used before, and I wanted to learn something different,” she said. “I wanted to extend my knowledge beyond everything I knew at that stage.”

She became a faculty member in the biomedical engineering department in 2017 and holds an adjunct appointment in pharmacy. Her thirst for knowledge naturally evolved into a desire to help people — especially at-risk populations.

“As a woman from Africa, I wanted to find a way to help those women,” Benhabbour said. “They are so vulnerable — I wanted to create a mechanism they could use to protect themselves.”

Inspired by a project she worked on in her postdoctoral research, Benhabbour decided to make an intravaginal ring that could serve a variety of women’s health needs — from infertility to HIV prevention — empowering marginalized women in Africa (and elsewhere) to take their health care into their own hands.

The challenge came in manufacturing the device — the time required made it impractical to help a large number of women.

After watching then-Carolina professor Joseph DeSimone give his TED talk on faster 3D printing, Benhabbour wondered, “what if we could make an intravaginal ring with complex geometry at that speed? It would completely overcome all the manufacturing hurdles.”

In collaboration with the DeSimone lab, Benhabbour developed prototypes, filed a patent and started thinking about forming a company.

In 2016, Benhabbour officially founded AnelleO with the simple motto: where 3D printing meets women’s health. In May 2017, AnelleO received its first seed funding from the Carolina KickStart program.

The motivation for starting a company, Benhabbour said, has always been philanthropic. By focusing on a for-profit product, the company can rapidly develop the technology, then direct needed resources into humanitarian causes.

Benhabbour considers the supportive, innovative environment at Carolina an essential component of her success — especially the direct access to clinicians.

“As a bench scientist, you really have to have that connection,” she said. “If I don’t know what their hurdles are, how can I design the right technology? Hearing about patients’ experiences is what gets ideas going.”