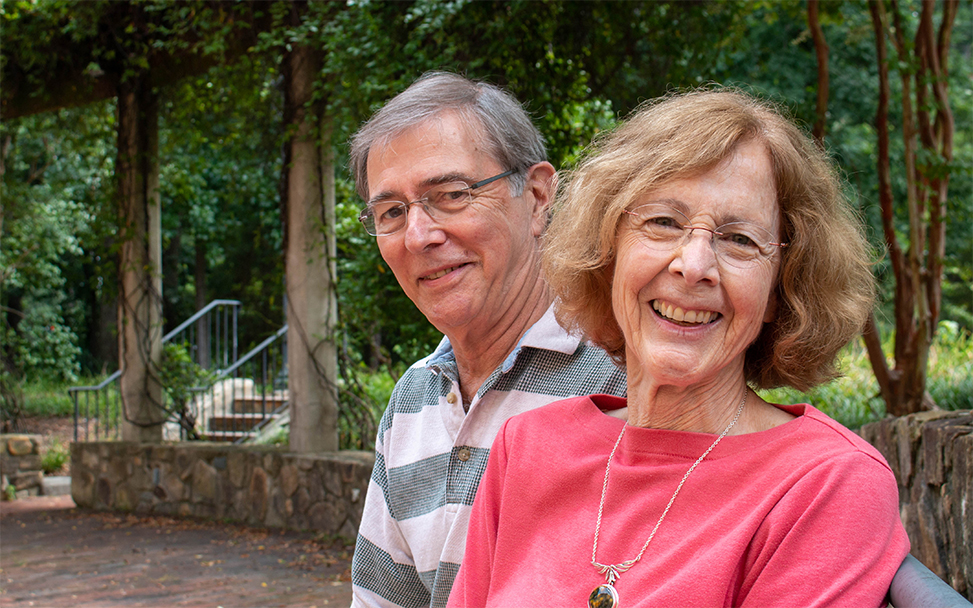 Joanne Garrett and her husband, Peter, are longtime fans of PlayMakers Repertory Company. Some of their first dates were to PlayMakers performances.(photo by Kristen Chavez)

Garrett received an undergraduate degree in dramatic art in 1969, a master’s in biostatistics in 1978 and a Ph.D. in epidemiology in 1990. She was born just outside New York City to an extended family that included authors, composers, performers and managers in theater, opera and ballet.

She describes them as “ordinary people, sitting around the kitchen table laughing, gossiping and kvetching about life’s problems. They just also happened to be doing extraordinary things in the arts.”

During her 30-year career with the UNC School of Medicine, she never got around to writing that play, but she has found another way to make her mark in dramatic art.

Garrett and her husband, Peter (Ph.D. ’92), have created an endowment to fund the producing artistic director position for PlayMakers Repertory Company, a position currently held by Vivienne Benesch. The fund will also provide support for PlayMakers through the production of new works and educational programming for K-12 students.

Garrett’s family moved to Asheville when she was 5.

“Asheville couldn’t have been a more wonderful place to grow up,” she said. “We made trips back to New York to visit family. While there, we attended Broadway shows and other performances. It was the best of both worlds.”

Garrett continued cultivating that love of theater as a student at UNC.

“I dabbled in many different courses,” she said. “Then I discovered PlayMakers. It was exactly what I needed — a smaller community of talented, creative, congenial people. I found a whole new family.”

PlayMakers presented new plays each year. During Garrett’s junior year, they chose to perform a one-act play that she wrote.

“Then, during my senior year, [Pulitzer prize-winning] playwright Paul Green wrote a play to celebrate the 50th anniversary of PlayMakers and asked me to be the stage manager,” she added. “What an experience to get to work with such an amazing legend! … I graduated with the goal of one day writing a successful Broadway play.”

Garrett also enjoyed math and science, so despite her passion for the arts, life took a different turn.

“The practical side of me brought me back to school for my two graduate degrees,” she said. “The best part was meeting my wonderful husband, Pete, a physician who also returned to school to get a Ph.D. Through the years, we attended almost every season of PlayMakers. In fact, some of our first dates were going to dinner and then to PlayMakers’ performances.”

Garrett said her “very fulfilling career as a researcher, teacher and mentor to future physician researchers” was enriched by her drama education: “I once had an undergraduate drama teacher say that teaching was not that different from performing.”

Garrett retired from the School of Medicine in spring 2018.

“For the first time, I began to consider how to spend the remaining phase of my life. Maybe it was too late to get that play written, but I thought that I could still give back by leaving a legacy with PlayMakers,” she said.

“Perhaps I could help launch a budding playwright, help a troubled young person learn how to express feelings though drama or establish opportunities for creativity in a world that seems of late to have forgotten the indispensable values of humanities and the arts.”