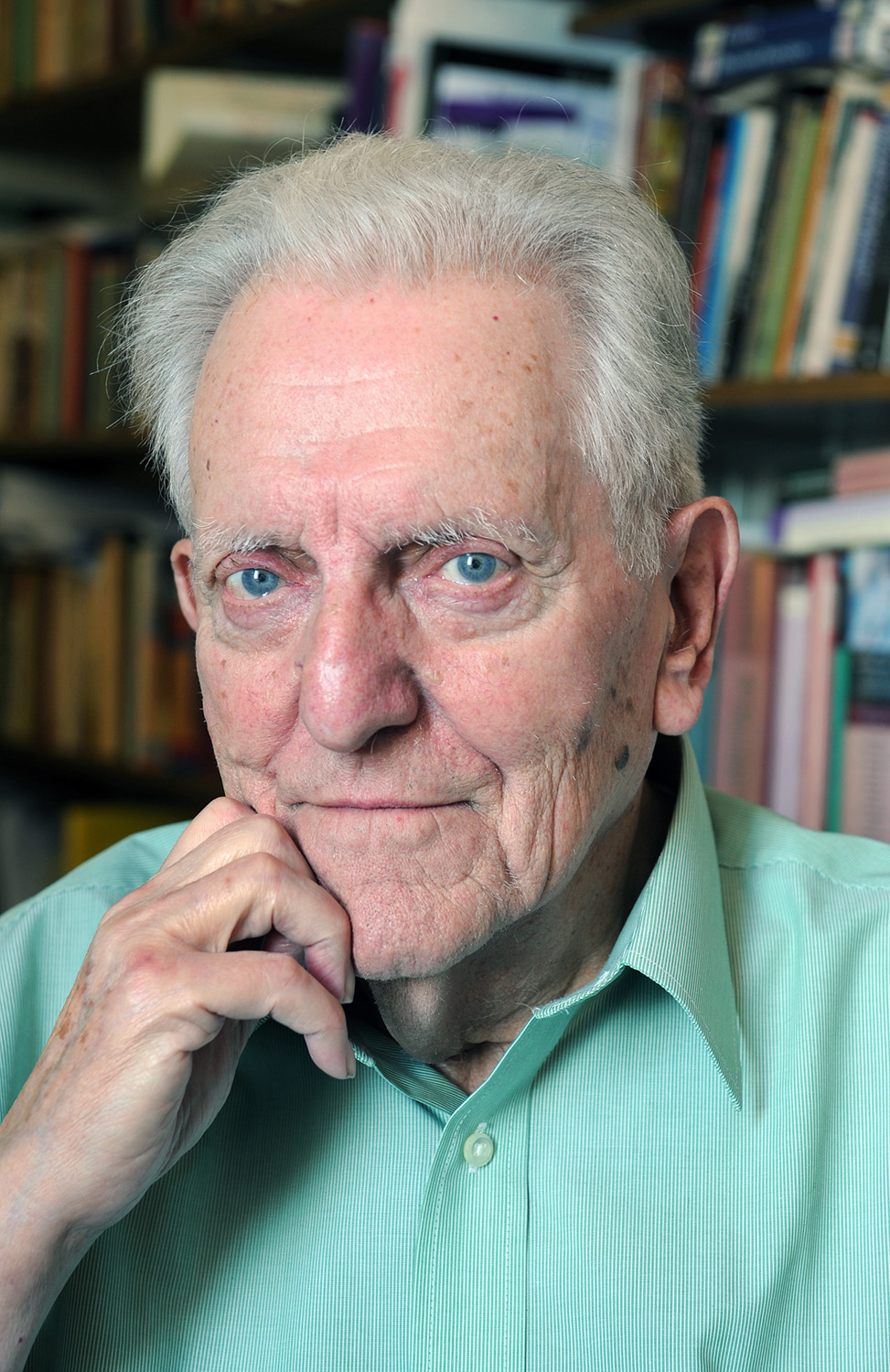 Armitage offers this parting advice for junior faculty: "As a teacher, you are not going to make a lot of money, but you are influencing the future." (photo by Donn Young) 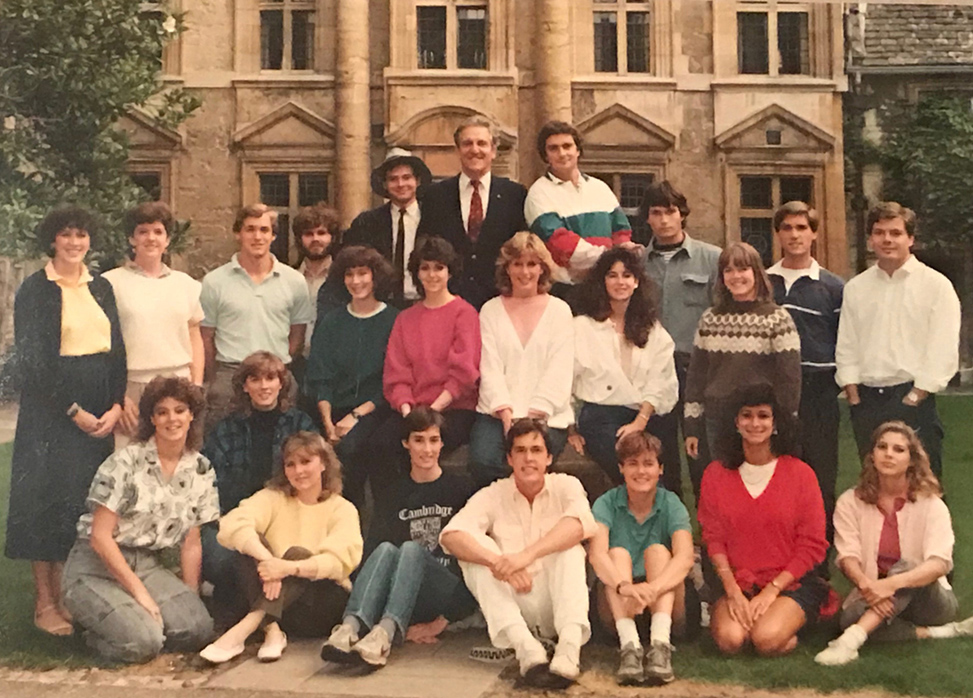 The 1985 Oxford trip led by Armitage; Laine Kenan and Tom Lutz were on that trip. Armitage dubbed them “Rosencrantz and Guildenstern.” (photo courtesy of Laine Kenan) 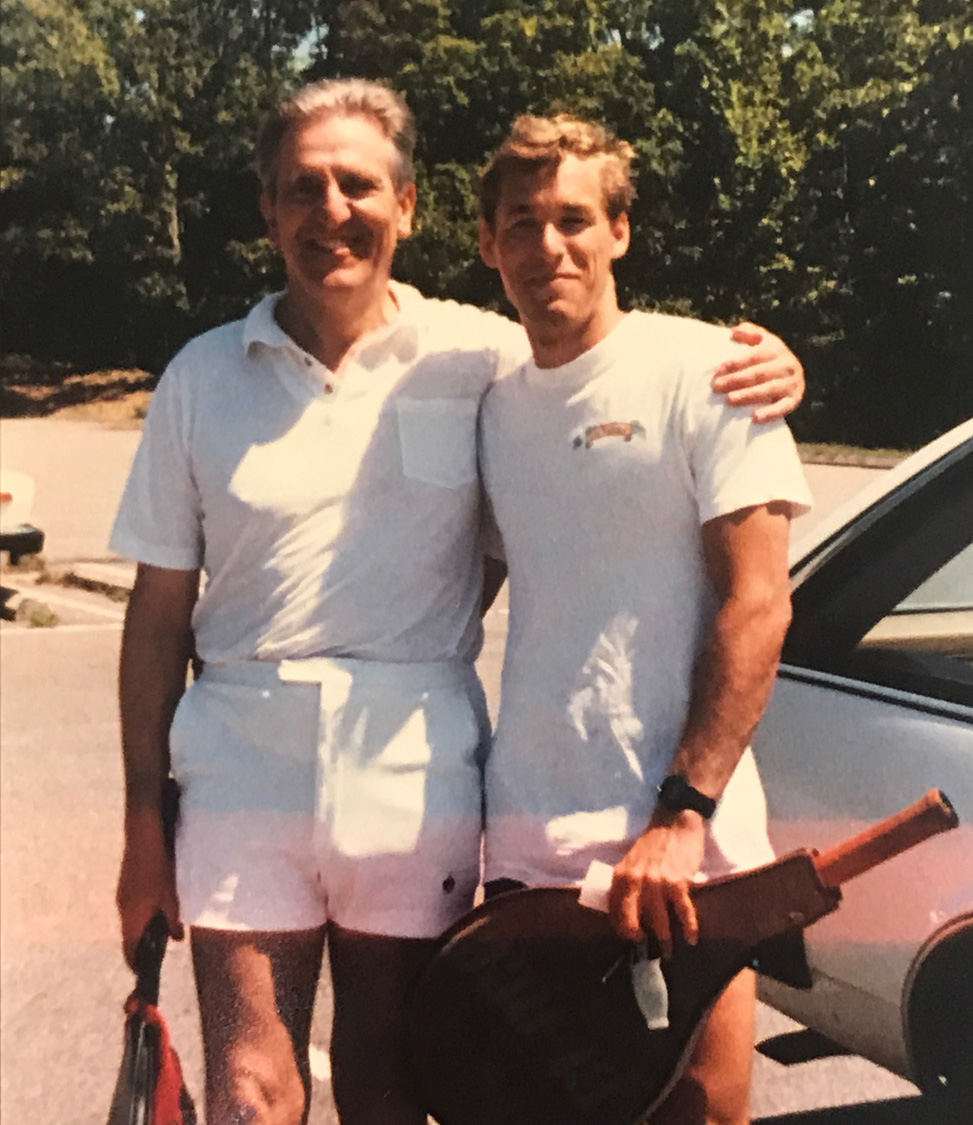 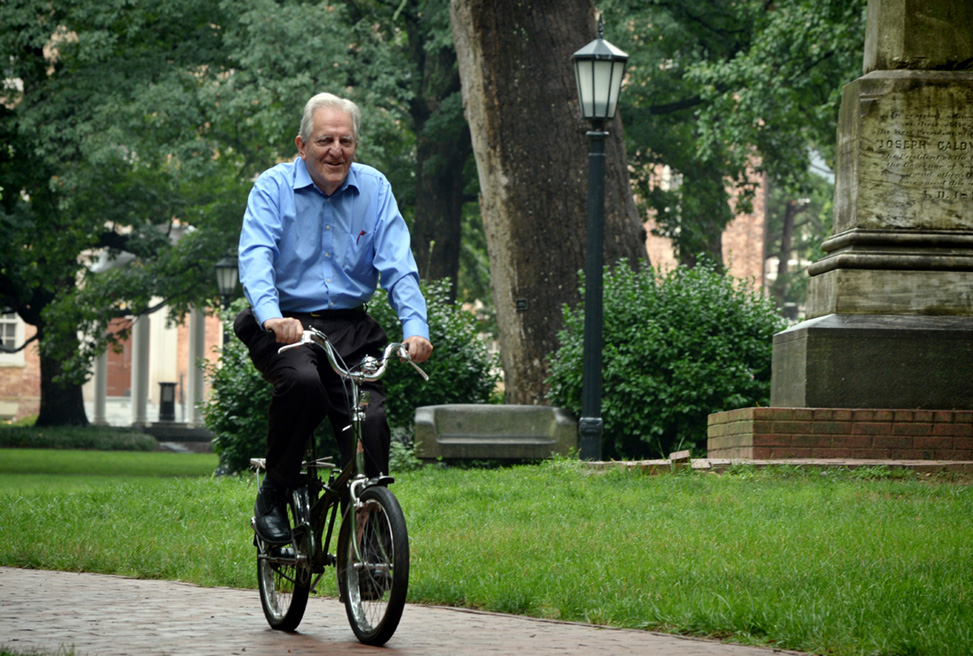 Armitage was known for the folding bike he rode regularly across campus. It fit neatly into the trunk of his Honda. (photo by Dan Sears)

The Lion of Greenlaw

After teaching for 53 years at Carolina and leading study abroad experiences to England since 1973, English and comparative literature professor Christopher Armitage turns the page on his next chapter. 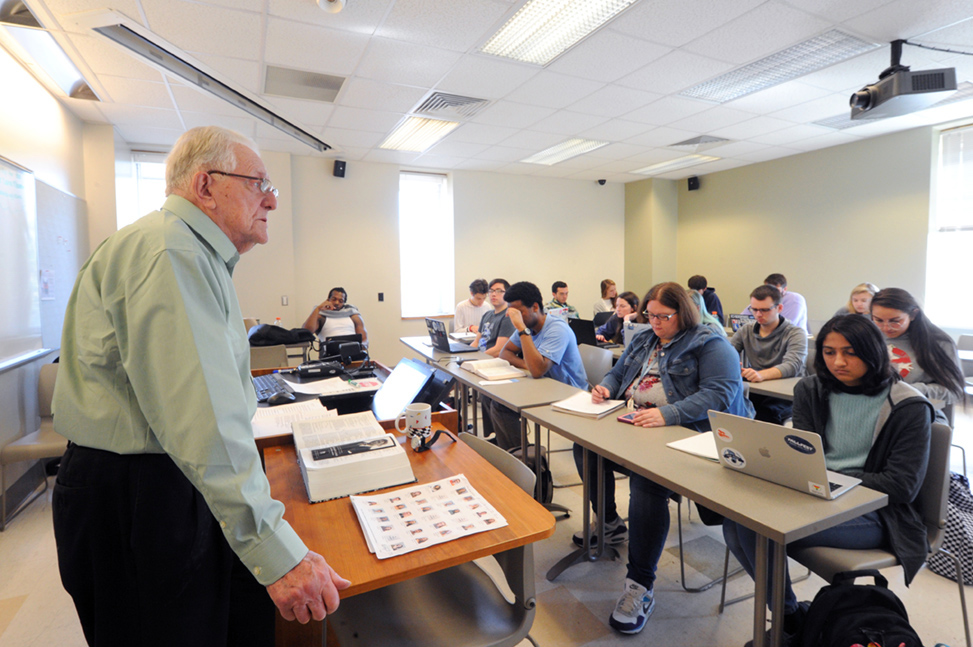 Professor Christopher Armitage taught his Shakespeare class in Greenlaw Hall for the last time in fall 2019. He calls Shakespeare “a supreme master of language” with a flair for telling a good story. (photo by Donn Young)

Professor Christopher Armitage has a lot of interesting memories from his 53 years of teaching at Carolina. But it’s hard to top riding a horse across campus on Oct. 12, 1993, dressed in an 18th-century costume and meeting storied Carolina basketball coach Dean Smith — all in one day.

For many years, passersby were likely to see Armitage riding a folding bike (which fit nicely into the trunk of his Honda) from a parking spot on a residential side street near campus to class. But a horse — well, that was a different story.

Proof of this momentous day lies in the photos tacked to his office wall on the fifth floor of Greenlaw Hall, home of the College’s department of English and comparative literature. There Armitage is, dressed as William Richardson Davie, “pressing the flesh” as he describes it, with Dean Smith.

Armitage was asked to portray UNC founding father Davie at the institution’s bicentennial celebration. Along with Smith, he presented saplings of the Davie Poplar, the beloved tree on McCorkle Place that honors Davie’s legacy, to children representing every county in North Carolina.

“I had ridden donkeys when I was a small boy on summer holidays at the beach, but I had not been on a horse in 40 years,” he said, chuckling at the memory. “But fortunately the president of the UNC Equestrian Club whisked me off to a farm in Hillsborough and trained me.”

Armitage, who studied at the feet of C.S. Lewis and J.R.R. Tolkien at the University of Oxford, retired last fall after sharing his love of Shakespeare with countless Carolina students. He turned 89 in February.

Last summer, in his popular “Shakespeare through Performance” Honors Carolina course, students spent about three weeks in London (with classes at UNC’s Winston House) and three weeks at St. Edmund Hall, known affectionately as “Teddy Hall,” the last surviving medieval hall at Oxford and the oldest academic society for the teaching of undergraduates.

Creative writing professor Randall Kenan, whose office is two floors below Armitage’s, knows all about the Oxford experience. As an undergraduate student at Carolina, Kenan went on that trip in 1984. He came up with the term, “the lion of Greenlaw” as a tribute to his former professor, now colleague.

Kenan said he got his “belly full of theater that summer.”

“I’d go to West End plays for next to nothing. I saw Lena Horne, I saw Evita, and I’ll never forget at Stratford-upon-Avon we saw Richard III, one of the greatest memories of my life,” said Kenan, who also took two Shakespeare courses and a Romantic poetry class with Armitage in Chapel Hill. He also remembers a visit to The Eagle and Child, a pub that Lewis and Tolkien often frequented.

“I don’t know if students realize how lucky they are to have studied with someone with such longevity,” Kenan said. “To hear him read [poet Percy Bysshe] Shelley — that was a revelation.”

Kenan’s classmate Whit Morgan (B.A. ’85, M.A.T. ’86) also went on the 1984 trip. He’s been a teacher for more than 30 years at Episcopal High School in Alexandria, Va., and credits Armitage as his inspiration for choosing teaching as a career.

“Watching his enthusiasm for and knowledge of literature was, for me, akin to hearing a virtuoso performance on a violin — an experience of total mastery,” Morgan wrote in a tribute to Armitage called “Lionizing the Lion of Greenlaw” that was presented at a fall retirement celebration. 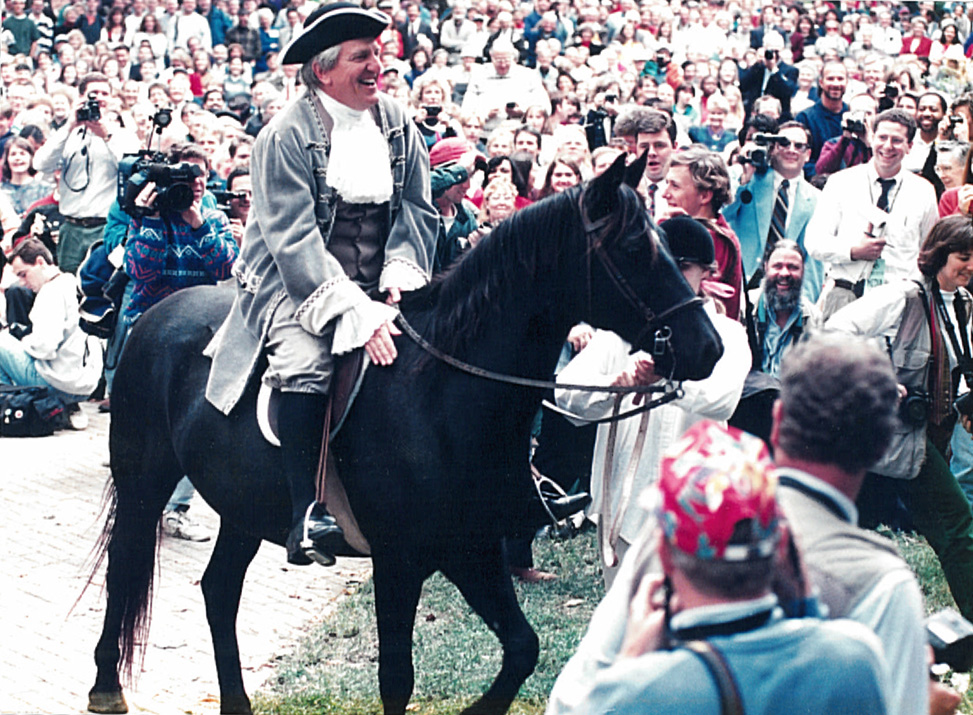 Armitage, dressed as William R. Davie at UNC’s bicentennial celebration, recreates how Davie came to choose Chapel Hill as the site for the University of North Carolina. (photo by Connie Eble)

Armitage, who was born in Manchester, England, moved to Canada in 1954. After teaching at two Canadian universities and working as a technical writer with the Royal Canadian Air Force, he received a graduate scholarship to pursue his Ph.D. at Duke University.

He took his first post-Ph.D. teaching position at UNC in 1967 and realized early on the value of students studying abroad. He began leading trips to England in 1973. In 2011, he decided to strengthen Carolina’s ties to the University of Oxford even more. In addition to leading his annual study abroad trip, he endowed at Oxford the Christopher Mead Armitage and Pauline Brooks Armitage Scholarship for Visiting Students to support a UNC student studying for a term at St. Edmund Hall.

“I took my family inheritance and put my money where my mouth is — in education,” said Armitage, who is also an Honorary St. Edmund Fellow. “People kept saying, ‘Why don’t you buy a condo on the beach? Or a Maserati?’ I have enough trouble looking after my house in Durham, and why would I want a flashy automobile?”

Alice Huang ’16 was a recipient of the Armitage scholarship, studying abroad at Oxford during the 2014-2015 school year, then serving as Armitage’s teaching assistant on the Shakespeare trip in summer 2015. Today she is a Schwarzman Scholar at Tsinghua University in Beijing, pursuing a master’s in global affairs.

She said Armitage has remained a mentor and given her much invaluable advice. She hopes to pursue a career in international development.

“My time at Oxford was incredible. Not only was I able to delve into economics and mathematics, but I also experienced a vibrant student culture and made lasting friendships,” she said. “I will forever remember watching Twelfth Night in the gardens of St. Paul’s Church in Covent Garden.” 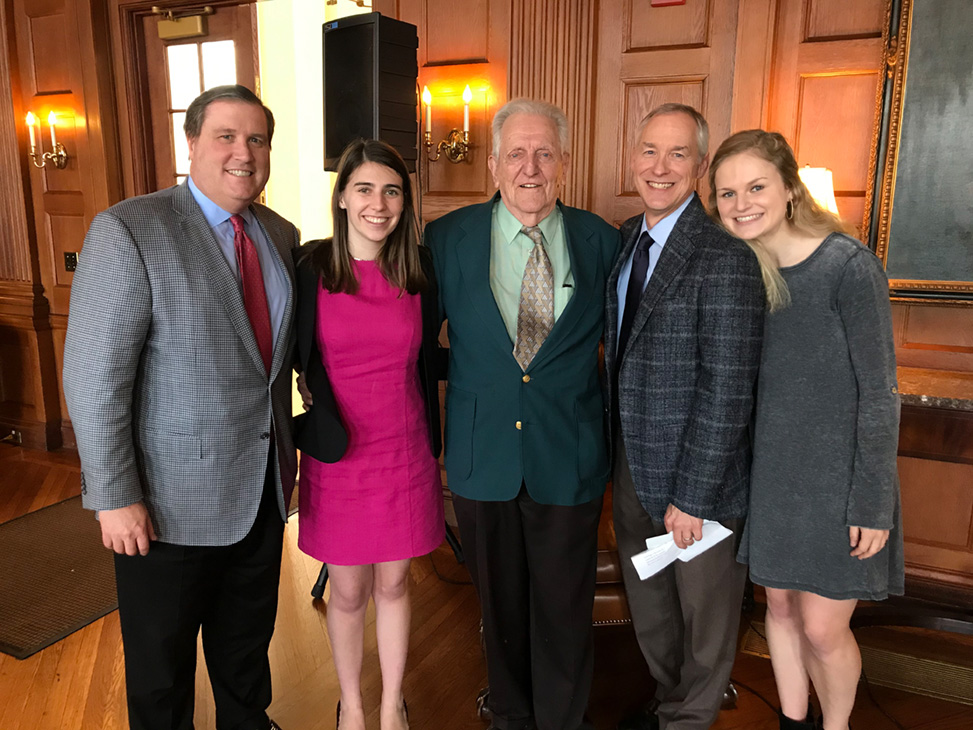 Armitage’s study abroad trips proved so popular that children of his former students went on the expeditions, creating a family legacy of studying Shakespeare through performance. Students saw about 10 plays, wrote reviews and discussed how the text was adapted to the stage.

Laine Kenan ’87 remembers Armitage spilling “lots of editor ink” on his assignments. Armitage had very high expectations of his students. Laine also remembers his quick wit; Armitage once said to a student who didn’t put forth his best effort: “My friend, you appear to be an alchemist because you make other students in the class to be gold.”

Laine went on the Oxford study abroad trip in 1985; Armitage dubbed he and his good friend Tom Lutz “Rosencrantz and Guildenstern.” “I’m pretty sure it wasn’t entirely a compliment but offered in good humor,” Laine said.

In 2018, Laine and Lutz encouraged their daughters, Claire and Charlotte, respectively — both now students at UNC-Chapel Hill — to go on the trip. And they went back to Oxford to spend time with their daughters.

Claire said the experience pushed her out of her academic comfort zone, but she loved it so much she agreed to be Armitage’s student assistant on the summer 2019 trip.

“With the world as your classroom, we also had the opportunity to visit museums and experience cultural elements that can inform your education,” she said. “It’s important to have a global perspective, and study abroad can really fuel that.”

Laura Dover ’92 credits Armitage with instilling in her a lifelong love of literature; she went on to pursue a master’s in English literature from Villanova University. She experienced the Shakespeare trip in 1992 and calls Armitage “the epitome of a scholar, the quintessential Oxford academic and an asset to UNC students over multiple generations.”

Her favorite memories include “attending Shakespearean plays in Oxford courtyards, patronizing the kabob truck in our pajamas at midnight, daily visits to Queen’s Lane Coffee House, learning to play cricket, hanging out at the buttery at Teddy Hall and taking trips to London and Stratford.”

Doran said Armitage made sure classes were lively and peppered with talk of current events.

“He’s been teaching this for so long and knows the material so well, but he wasn’t afraid of trying new things,” Doran said. “And because it was a small class of around 20 students, he would take note of people who were not participating as much and bring them into the conversation.”

Her mother came to visit her that summer in Oxford, sitting in on a class, attending a performance and paying a nostalgic visit to Queen’s Lane Coffee House, established in 1654.

“It’s still there and exactly the same,” Dover said. 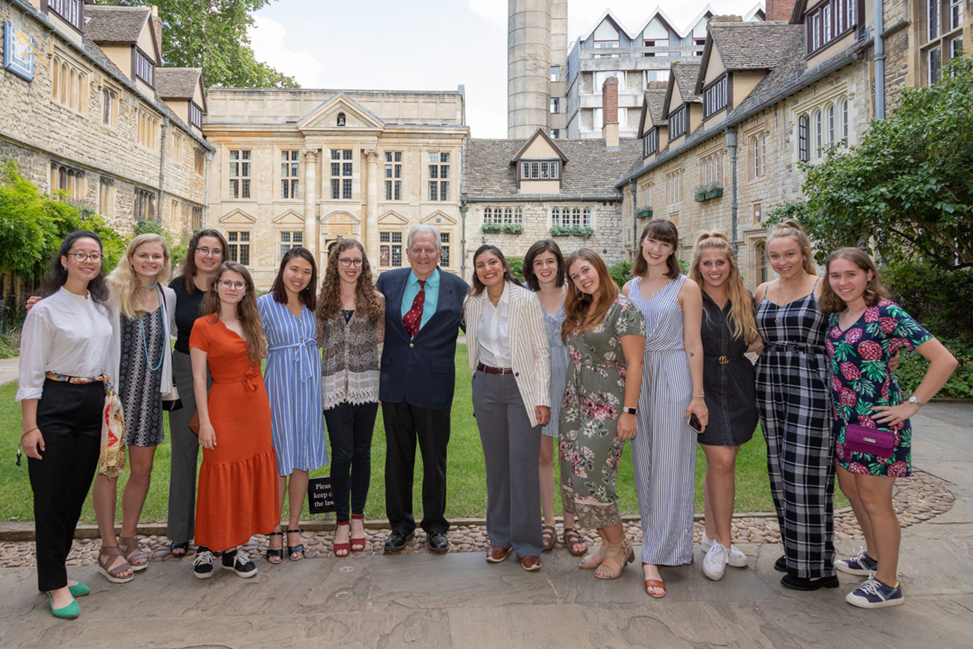 Armitage has won a slew of the University’s top teaching honors, including the Tanner and Board of Governors awards, both for excellence in undergraduate teaching. He twice held the Bowman and Gordon Gray chair, also given for inspirational teaching of undergraduates. He was invited to give the University Day address in 2005.

This semester, as he cleans out his office, he’ll pack up those framed certificates. But he’ll keep his trademark sense of humor, which was once characterized in a campus publication as someone who takes “teaching seriously not solemnly.” He stays in touch with many former students and recently received some poems set to music from a 1974 graduate.

Some of those alumni have come together to create the Christopher Armitage Student Travel Scholarship to honor their former mentor and professor and to support future students participating in the Honors Carolina program in London and Oxford.

In retirement, Armitage plans to work on a volume of his own poetry, along with some autobiographical sketches. (“Like what it was like to be bombed by the Luftwaffe [during World War II] when I was a kid!”) He’ll visit his three sons and four grandchildren, who are scattered throughout the United States.

“I’ve taught over 20 different courses in this department, from freshman remedial composition to graduate seminars,” he said. “As a teacher, you’re not going to make a lot of money, but you are influencing the future.”

Read more about Armitage on UNC’s The Well.