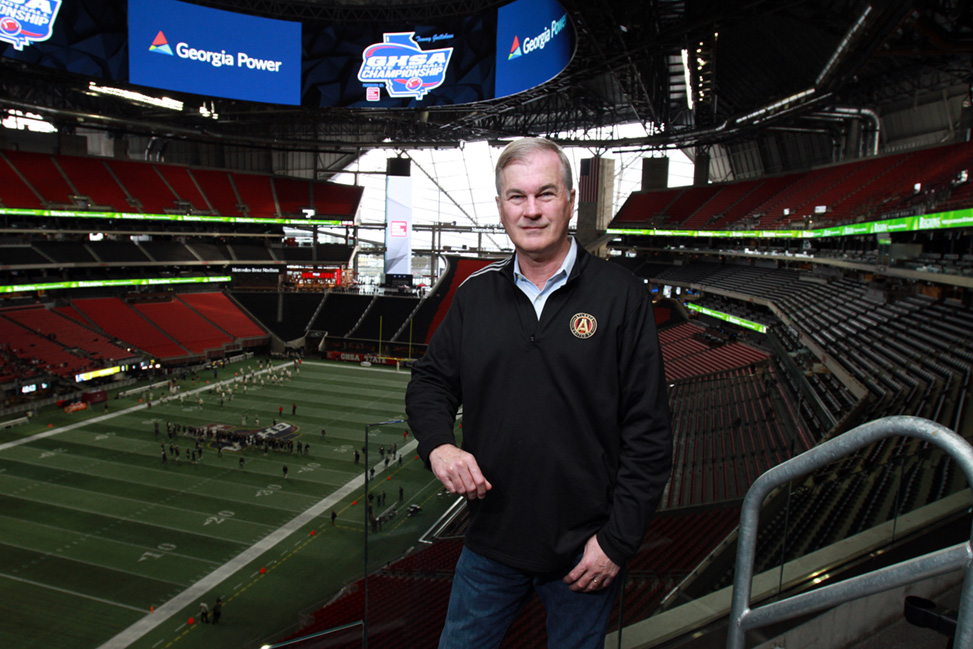 Mike Egan has taken his history and law background into the sports arena. He oversaw construction of the Mercedes-Benz Stadium in Atlanta, host of the 2019 Super Bowl.

His background was in mergers and acquisitions. He had never overseen a major home remodeling project, much less building a 71,000-seat sports stadium (expandable to 75,000).

“I said, ‘Arthur, I don’t really know anything about construction,’” Egan recalled. Blank’s response? “That’s OK. I just need someone to ask hard questions and to get things done.”

Supervising the building of the stadium was “a stressful learning experience” full of last-minute decisions and all-nighters, Egan said, adding, “I mean that in the best kind of way.”

The stadium hosted the Super Bowl in 2019. Egan considers the first day fans streamed into the building in August 2017 a highlight of his career.

“When I saw the looks of awe and delight on their faces, it was just an incredible moment,” said Egan, senior vice president and general counsel for AMB Group, the holding company for Blank’s business interests. In addition to the Falcons and the stadium, AMB owns pro soccer team Atlanta United and PGA Tour Superstores, the largest golf retailer in the country.

An Atlanta native and one of six children, Egan grew up wanting to be in law like his late father, a prominent Atlanta attorney who served as associate attorney general in the U.S. Justice Department during the Carter administration.

Egan had a passion for European history because of stories shared by his maternal grandfather, a fighter pilot in the Army Air Corps in World War I, and his father, who was a U.S. Army first lieutenant in the Pacific theater in World War II and Korea. Armed with a Morehead Scholarship, Egan headed to Carolina to major in history.

A highlight came in 1989 when a temporary assignment with Coca-Cola required Egan and his wife, Mindy, and three small children to move to Dusseldorf, Germany. Three months later, the Berlin Wall came down. Armed with hammers and chisels, the couple traveled to Berlin and chopped off pieces of the wall, which are now on display in their den.

In 2002, Egan began serving as outside counsel representing Blank and played a key role in negotiations for Blank’s acquisition of the Falcons and Atlanta United. In 2015, Egan went to work for Blank full time.

Egan has maintained strong ties to his alma mater, having served on the Honors Carolina advisory board for more than a decade and on the UNC General Alumni Association board before that. Two of his four children went to Carolina — Katie (English/creative writing ’08) and Chas (business ’17).

“I loved UNC and still love it. It just was a very special time in my life,” Egan said. He has also continued his lifelong passion for history. His latest read? Genghis Khan and the Making of the Modern World by Jack Weatherford.

Egan said he is a big believer in an arts and sciences education and is grateful for the lifelong skills he gained “in my ability to write, to think and to see different viewpoints. It has been a critical foundation for any success I’ve had.”