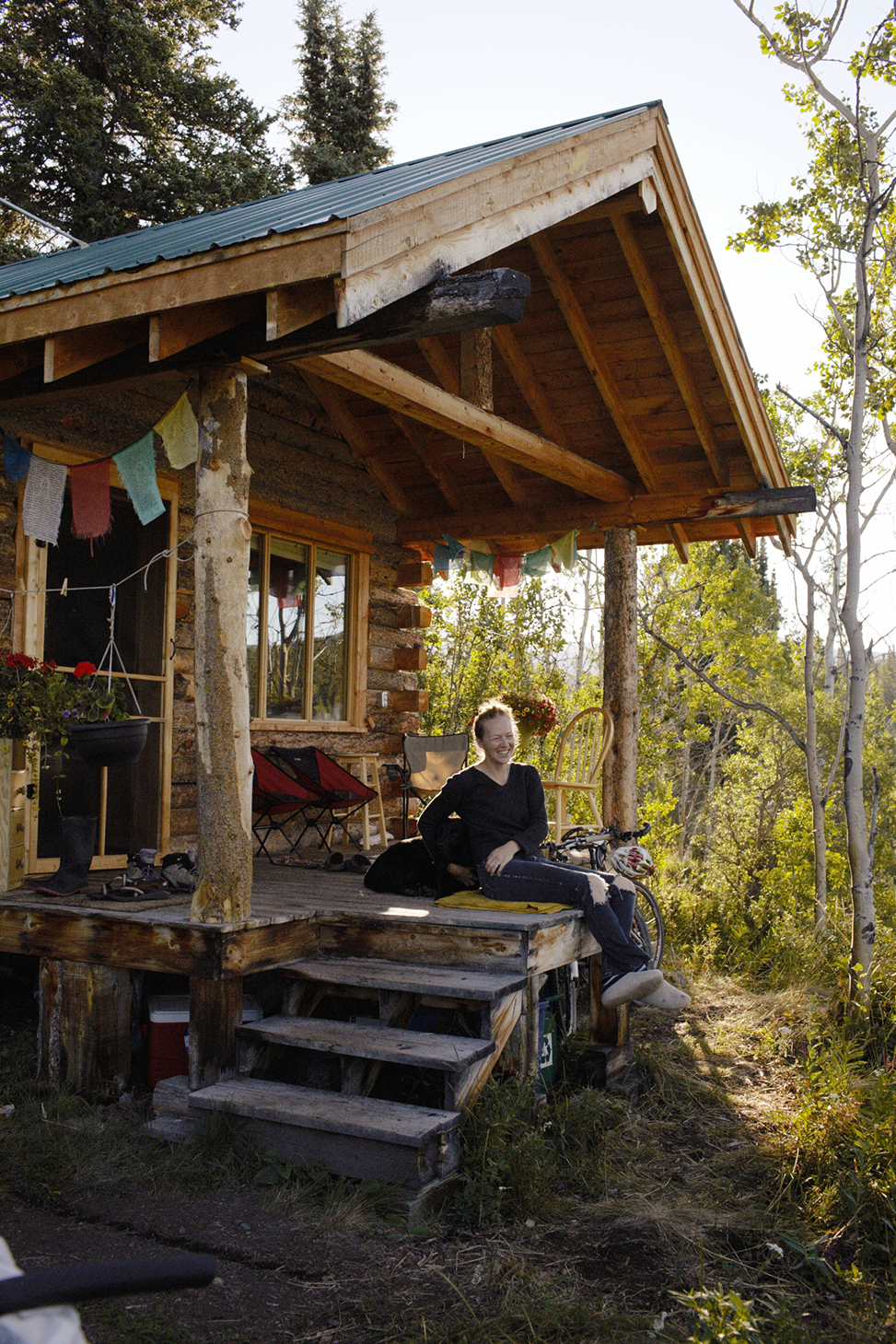 Kate Harris in her cabin in Atlin, British Columbia. (photo by Joanne Ratajczak)

Out of Bounds on the Silk Road

In this online magazine extra, author and alumna Kate Harris (biology major, geology minor ’05) talks with us about her new travel memoir, Lands of Lost Borders: A Journey on the Silk Road (HarperCollins). The Morehead-Cain and Rhodes Scholar shares how Carolina whetted her appetite for travel. Read an alumni profile on Harris here. This photo of night biking in Uzbekistan was used on the book cover. (photo by Kate Harris)

Q: Your appetite for exploration began early — tell us about how your time at UNC-Chapel Hill helped to fuel that passion.

A: Carolina was an incredible launch pad for just about anywhere and everywhere I wanted to go. I remember feeling like a kid in a candy shop when I arrived on campus — the sense of the world around you expanding. I’d always been compelled by Antarctica, and I walked into the geology department at Carolina and there were posters by professors who were doing research there. The connections to the wider world were so vivid and immediate. I felt like I was in the middle of a fantastic web of connections and if you were resourceful, and had the gumption to just ask people, you could go just about anywhere.

Q: How do you explain the lure of the Silk Road to you — what drew you not once, but twice, to this special place?

A: In a way, it was Marco Polo becoming less a hero than an antihero to me. I read for the first time the unabridged edition of his travels when I was at Carolina. I had been attracted to him as a little kid based on a children’s book, but I realized he wasn’t what I had built him up to be. What motivated his journeys and what he considered wealth in the world was very different from my own currencies. I wasn’t interested in the Silk Road for the reasons it’s so famous. The deserts and mountains are pretty formidable even today, and Marco Polo loathed them because they slowed travel down and were dangerous, but that attracted me.

Q: What surprised you most about the people you met along the way, who often opened their doors to you?

A: I was drawn to the Silk Road initially and even on that return trip because of my deep curiosity and attraction to some of the less populated parts of the world, but what made the trip so wonderful was people again and again. I feel like we hear all these divisive narratives in the news, but at heart most people are decent. I think we’re less divided than we think.

A: Traveling by bicycle permits an intimacy with the world around you that few other modes of transport do. It’s the most efficient form of human-powered travel there is. There’s joy in propelling yourself through a place — whether it’s your backyard or on the Silk Road.  It’s a democratic form of travel. So much adventure travel or expeditions require a lot of skills and equipment, whereas people all over the world own bicycles and even the junkiest bike can take you pretty far.

Q: How did this journey across the Silk Road change the way you view maps and borders?

A: I see them less as facts and enduring truths and more as stories — not fictions exactly because they do hold up, but rather narrative lines. They are true for our day and age; they are reinforced by barbed wire and bullets and national interests. But to see the world as it is now, as borders solidifying into what they will always be, is not true, and I think there’s a lot of consolation in that. There’s hope in that.

Q: How did your tiny cabin, off the grid in British Columbia, play a role in creating this book?

A: I vowed to move someday to Atlin after participating in the Juneau Icefield Research Program while at Carolina. It’s really remote but also this incredibly intellectual bohemian community. People are there because they want to be; that desire to live there unites everyone. I can’t remember the poet, but there’s a line where he says, “If you can find the place, you can find the poem.” Atlin opened me up so that I could explore ideas and images and language in ways I otherwise wouldn’t have access to. In a city I feel shut down, but I arrive in Atlin and expand to my best possible self. My life is incredibly rich here — in time and space — rich in the currencies that really matter to me.

Q: How has this book changed your life, and what’s next for you?

A: The past year feels like a surreal dream that I never would have expected to happen. I underestimated how much of a joy it would be to connect with readers. The reason I read is not just to learn, but to be uplifted and to see new possibilities. To think readers have had that experience with my own book, that’s a beautiful energy to put out in the world.

I’ve been taking flying lessons, so I’m burning up my book money in the air! It’s a thrill to see the world from another angle, and that’s why I travel essentially. Flight gives you a different slant on the world. It opens up new views of your usual stomping grounds.

Q: What advice would you give to Carolina undergraduates about traveling?

A: When I was an undergrad, I took advantage of every possible chance to go elsewhere, but I also felt this crushing sense of urgency, of time passing and me needing to figure out what I was doing next. I would encourage students to realize that life is short, but it’s also long, and there is plenty of time to get where you want to go, academically or career-wise. Use your undergraduate years as a time to explore and expose yourself to the unfamiliar as much as possible. You might fall in love with something you’ve never encountered before — it might be geology, or literature or another country.

Learn more and watch a “highlights reel” of the Silk Road trip at http://www.kateharris.ca/.