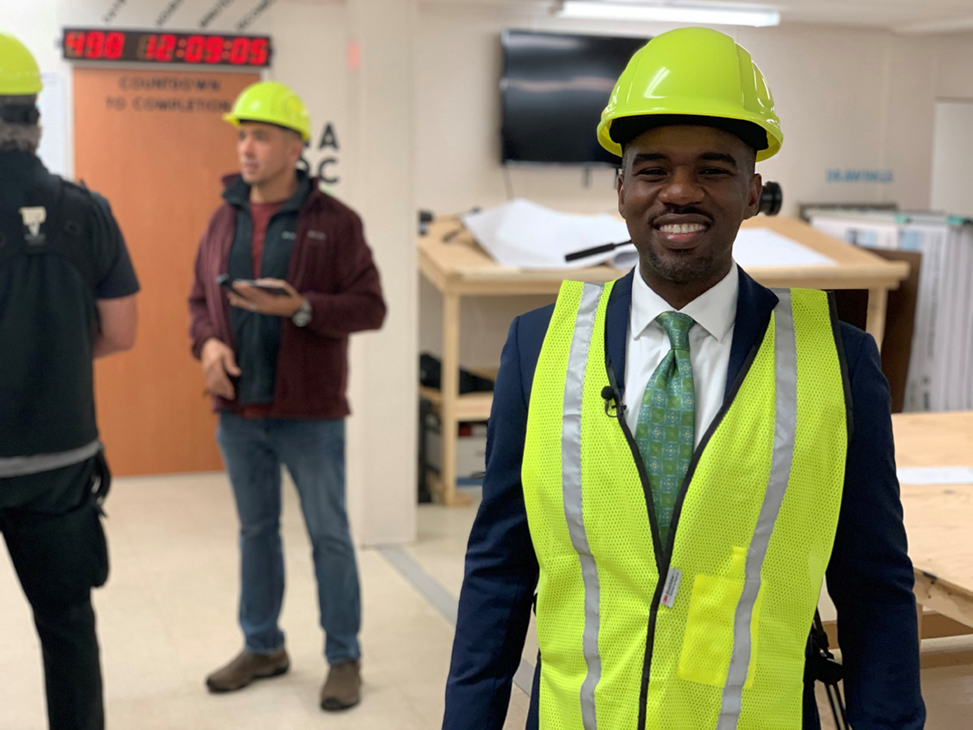 Elijah Heyward, at the construction site for the new International African American Museum in Charleston, says the nationwide reckoning over race makes this a critical time for the museum. (courtesy of Elijah Heyward)

Alumnus Elijah Heyward is guiding plans for the new International African American Museum on the site of the largest point of entry for enslaved people into the United States.

When Elijah Heyward III (Ph.D. American studies ’18) enrolled at Yale Divinity School for his master’s degree, most assumed he’d become a pastor. But that wasn’t ever his goal. Instead, Heyward said he followed the wisdom of Martin Luther King Jr., paraphrasing a quote attributed to the late civil rights leader: “Faith is taking the first step believing that God will build the staircase.”

“I was on a journey, and what was really important to me was allowing that journey to unfold,” Heyward said. Today, Heyward is living out his faith in a way that can impact people who never set foot in a place of worship: “It’s through education. It’s through cultural institutions. It’s through knowledge. It’s through values and ethics — all these things.”

Heyward, a native of Beaufort, South Carolina, is chief operating officer of the International African American Museum in Charleston. Scheduled to open in 2022, the approximately $100 million, 42,000-square foot waterfront museum and memorial garden will tell a part of the city’s history often overlooked — that it was once the largest point of entry for enslaved people into the United States.

An estimated 150,000 West African captives were brought to Charleston, many at Gadsden’s Wharf, between 1783 and 1808 during the height of the international trade. Those awaiting sale were kept in holding areas and many died there. The fact that so few Americans know this story “makes what we do so powerful,” Heyward said.

Exhibitions will cover the African diaspora, the spread of African American culture and influence, movements for justice and equality and other topics. The Center for Family History will enable visitors to trace their genealogy and connect the dots “for a community dispersed in ways that are really hard to bring together,” Heyward said.

Heyward first heard about the planned museum while serving on a panel with Charleston Mayor Joe Riley shortly after nine African Americans were killed in 2015 at Emanuel AME Church. Riley shared his vision for the project, which has been in the making for two decades.

Heyward said he was impressed by how the museum intended to tell the story of the diaspora. Too often, he said, the narrative “kind of starts with slavery and stays there.”

The museum plans to share stories predating slavery by focusing on innovators and entrepreneurs. It will also show that despite the horrific conditions, “there were amazing achievements that continue to impact America and the world.”

A permanent exhibit on the Gullah and Geechee communities — descendants of enslaved Africans who settled along coastal areas of the southeastern United States — has personal significance for Heyward. He was raised in such a community and focused his doctoral research at Carolina on Gullah and Geechee identity.

Of his time at Carolina, Heyward is grateful for resources including a Royster Fellowship that enabled him and other students “to become the best they could be.” He received a Center for the Study of the American South research grant to buy a camera for documentary work, which led to a photography exhibition at his dissertation defense. Through the Initiative for Minority Excellence, he received funds to attend conferences, such as one in South Africa.

Heyward’s temporary office overlooks the museum site. He considers it a sacred place for contemplation and visits daily. There’s always something new to take in. Best of all, it’s coming to life just 90 minutes from where he grew up.

The nationwide reckoning over race makes this a critical time for the museum, he said.

“For us, it’s important that we allow our history to be instructive in a way that we don’t repeat it, and a big of part of that is sharing an unvarnished truth that not only inspires and captivates, but moves people to action.”