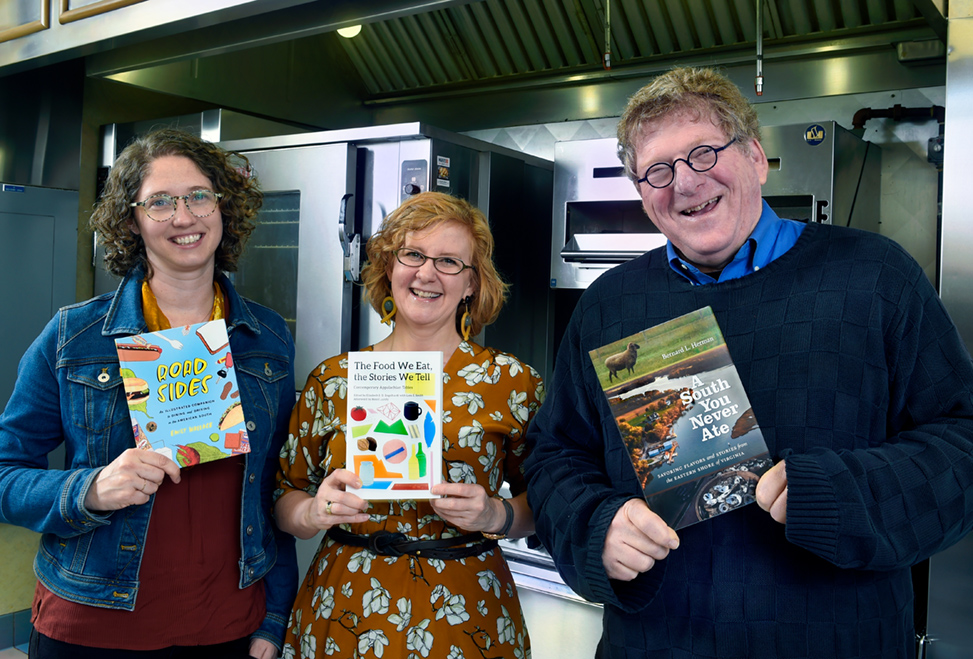 Food provides us with so much more than sustenance. It facilitates connections between people and provides a window into unique cultures and histories. In three recently published books, Carolina writers share fascinating stories about Southern food and the individuals who produce and consume it. 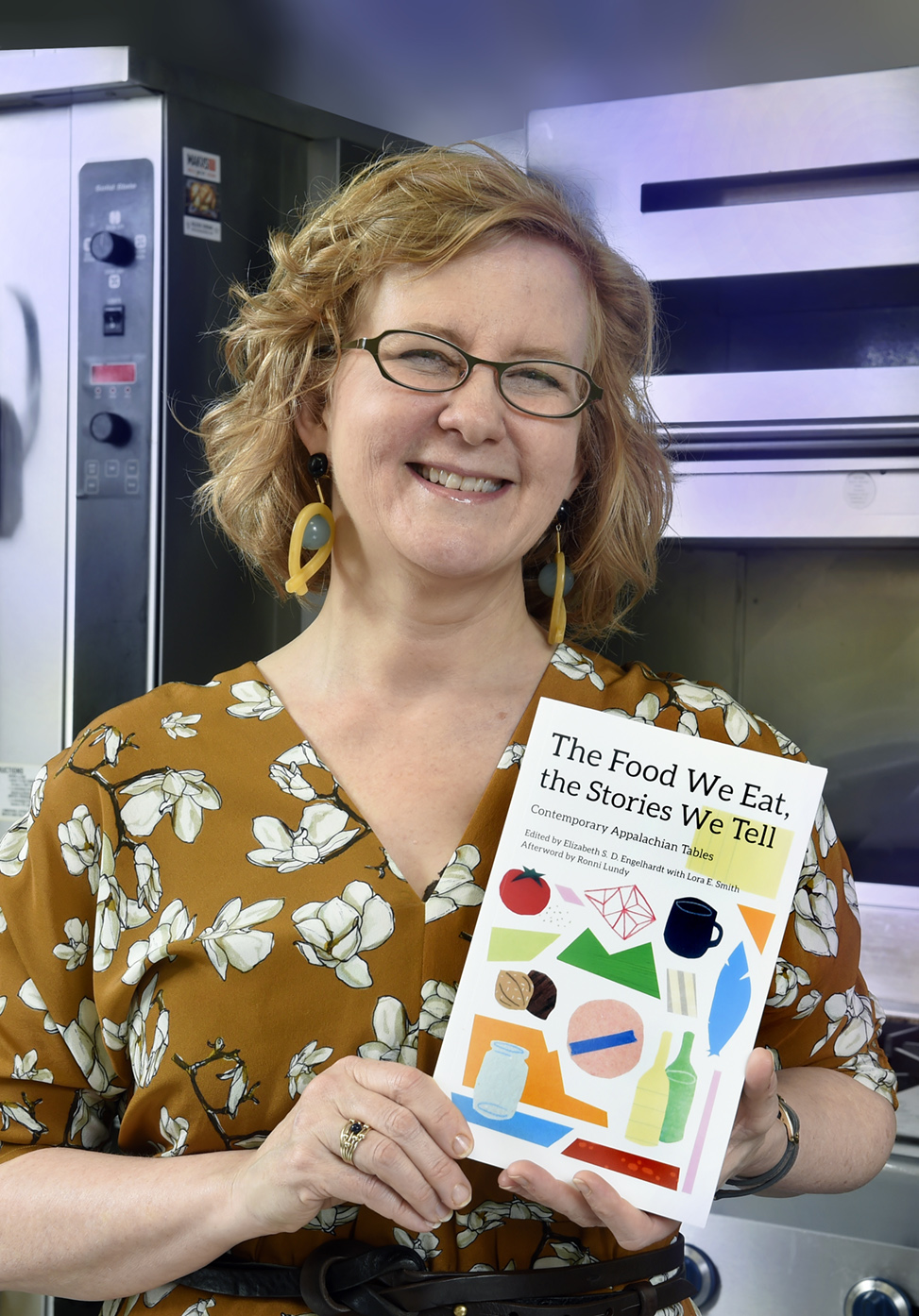 This anthology invites readers to sit down at an Appalachian table. “These stories are about the wonderful messiness of everyday eating: Blue Ridge tacos, kimchi with soup beans, frozen dinners from the local grocery chain and leftovers taken home in old Cool Whip containers,” said Engelhardt.

Composed of tales by a diverse group of contributors including poets, scholars, fiction writers, journalists and food professionals, Engelhardt’s new book portrays the past, present and future of Appalachia.

“Soup beans, cornbread, ramps and pickles — and the ways they are prepared, preserved and served — are in this book about Appalachian foodways,” she said. “So are fast foods, fancy wines and fusion tacos.”

“Some of the authors come from families with long pasts in the mountains, from members of the Eastern Band of the Cherokee to white and black families who entered Appalachia generations ago. Others have 20th- or 21st-century stories of migration and movement, arriving from Mexico, Central America, Spain, South Korea or Switzerland,” she added. “But what shines through all the stories are the connections between mountains and people made visible by the foods we share.”

Engelhardt proudly hails from Appalachia. “If you ask me, I am most likely to say, ‘I’m from the mountains of North Carolina,’ and the word ‘mountains’ is of equal importance as the other words in the phrase.”

With her first book about Appalachian women’s ecological and environmental literature and her more recent writing about food and cultures in the U.S. South, Engelhardt united those two interests in her most recent book. “I never left the mountains behind in my scholarship,” she said. 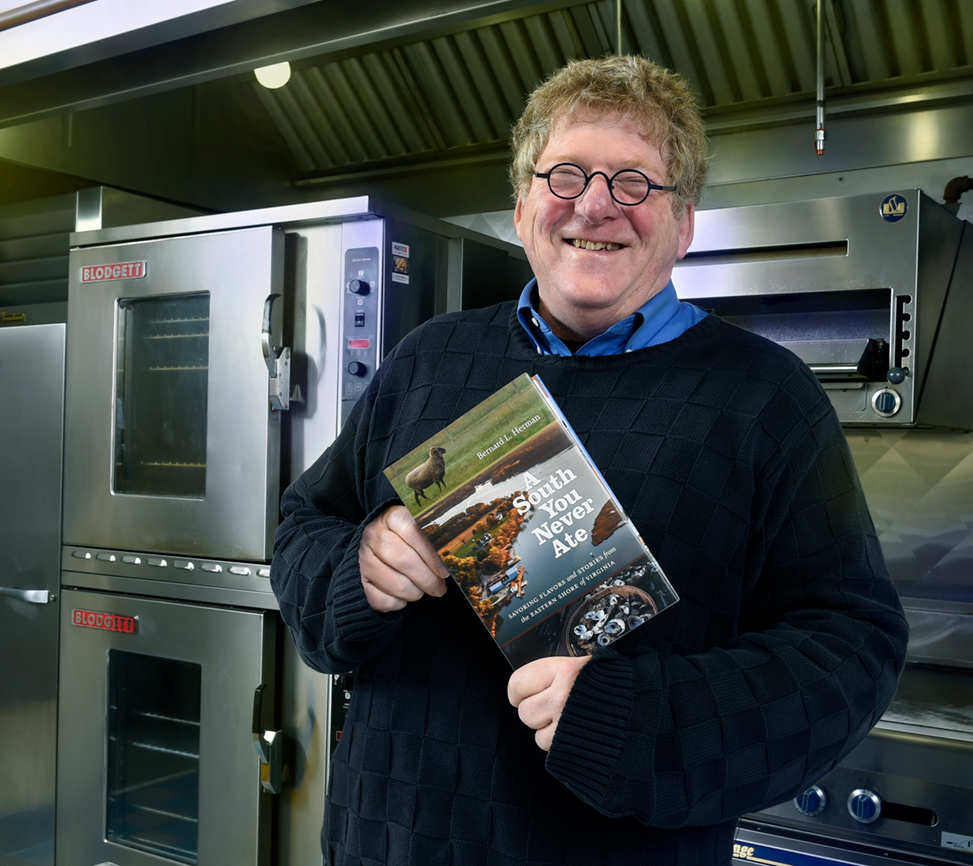 A South You Never Ate: Savoring Flavors and Stories from the Eastern Shore of Virginia (UNC Press), by Bernard L. Herman, George B. Tindall Distinguished Professor of Southern Studies and interim chair of American studies.

“When he is not tending his oyster beds in the waters of the Eastern Shore of Virginia, Herman researches, writes and teaches … at the University of North Carolina at Chapel Hill.”

His author bio is the first hint that Herman wrote his book — a narrative containing recipes, recollections, instructions and insights about food — as a labor of love about a community where he has lived off and on since the early 1950s.

In A South You Never Ate, Herman honors and celebrates the region’s cuisine and people. “I try to tell their story in their words, in a way that their heirs will continue to own forever,” he said.

“The book is about a truly undiscovered Southern culinary region, which has a cuisine that is every bit as distinctive as the Charleston Low Country or New Orleans Bayou Country,” Herman added. “On Virginia’s Eastern Shore, you’ll find clam fritters, baked fish chowders and oyster pies that are very close to recipes that were in circulation in the 1720s.”

“What you see is a great tradition of food, recipes, ingredients, fishing and agriculture that started well before Europeans and Africans arrived and which continues today,” he said. “What has emerged is a distinctive terroir,” he added, borrowing a term from viniculture that refers to the “taste” of a place.

Herman’s book comes alive through the stories of the region’s residents. Whether it’s oysterman Jack Brady or clammer Billy Bowen talking about mudlarking for peeler crabs or Mary “Mama Girl” Onley sharing her knowledge about yeast rolls, the book reflects the voices of Eastern Shore folks from all walks of life. “All of these people reflect generations of skill and care, which is what makes this place extraordinary,” he said. 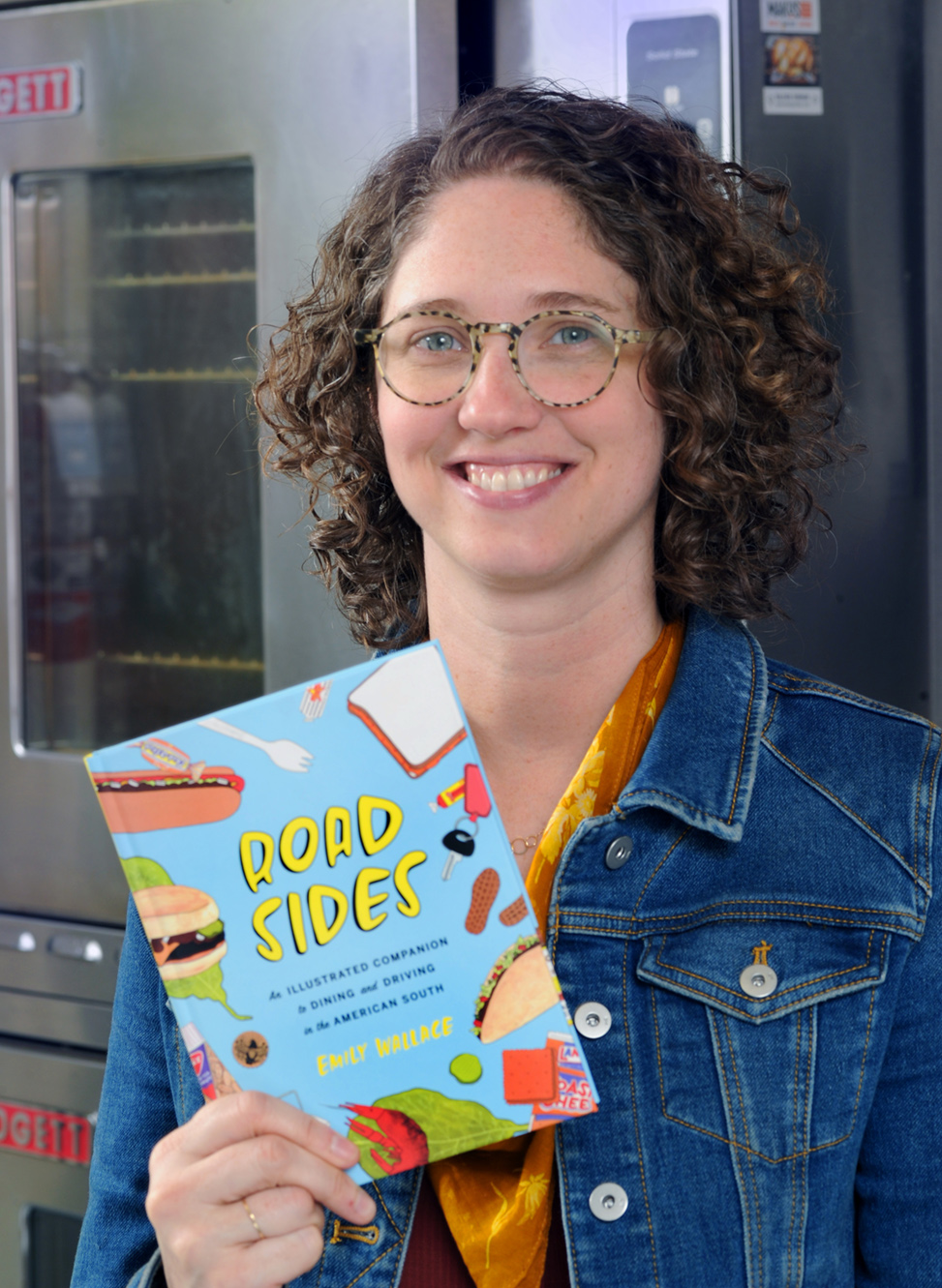 Road Sides: An Illustrated Companion to Dining and Driving in the American South (University of Texas Press), by Emily Wallace (M.A. folklore ’10), art director and deputy editor of Southern Cultures quarterly at the Center for the Study of the American South.

Bursting with 140 colorful illustrations drawn by Wallace, Road Sides is an A to Z compendium of essential visits for a well-fed Southern road trip.

The book begins with “A for Architecture” in Wallace’s hometown of Smithfield, North Carolina. A snow cone-shaped treat stand called Hills of Snow entranced the young Wallace and — combined with more recent research into Southern foods (Wallace’s UNC folklore master’s thesis centered on the history of pimento cheese in the Carolina Piedmont) — provided the impetus for the book.

“The road provided a way for me to tie all of these interests together,” said Wallace. “And the A to Z structure gave me parameters as well as jumping-off points. It allowed me, for instance, to write about kudzu’s culinary and roadside history for the letter K.”

And the letter D, which in this case stands for “directions,” let Wallace write about the history of Florida’s Welcome Centers, where employees hand out 900,000 maps, 14 million brochures and “six swimming pools worth of 100 percent Florida orange and grapefruit juices each year … all for free.”

Part travelogue, part encyclopedia, the book is not a travel guide. “It’s more a road map to histories and stories,” said Wallace. “You learn about a place through its food and communities.”

*Editor’s note: Bernard Herman’s book is among three nominees in the “reference, history and scholarship” category for the 2020 James Beard Foundation book awards.*

Find more books by College faculty and alumni, and visit college.unc.edu for “Bookmark This,” a monthly Q&A highlighting books by Carolina people.c