Dean Jim White comes to Carolina with experience as acting dean of the University of Colorado Boulder. (photo by Donn Young) White chats with students lined up for a sip from the Old Well on the first day of class. (photo by Donn Young) White, shown in the foothills of the Rockies, is a climate scientist who was elected to the American Association for the Advancement of Science for his contributions to the field. (photo by Ehren Joseph) 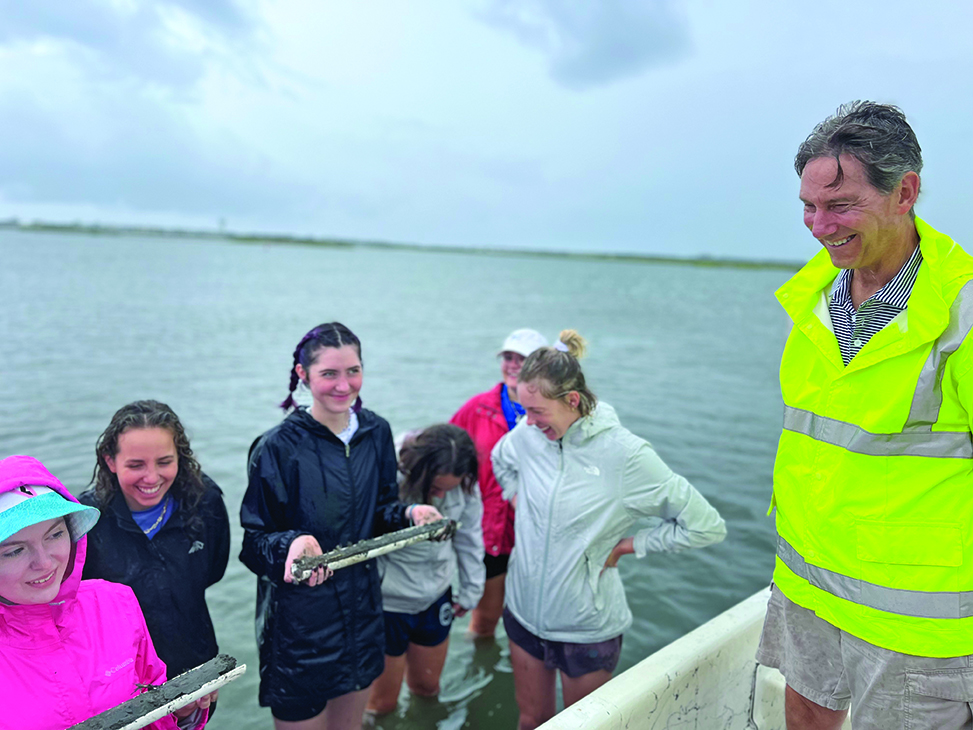 Students show White the sediment cores they have collected. He accompanied them on a class outing to Bogue Sound on the Carolina coast. (photo by Kerry Irish)

From Colorado to Carolina

Jim White, the College’s new dean, is a climate scientist and a consensus-builder.

It’s 8 a.m. on an unseasonably cool and overcast August morning at the College of Arts and Sciences’ marine lab on the Carolina coast, and the 11 undergraduate students taking part in the Morehead City field site semester gather near the docks for their first class.

Jim White, who became dean of the College on July 1, is there to observe. After a brief orientation, the students, who are studying human impacts on North Carolina estuaries, scramble aboard two 18-foot skiffs, accompanied by White and several faculty members in the department of earth, marine and environmental sciences, or EMES.

As the boats motor out, a brief downpour drenches everyone. It becomes a morning of mud and muck and soaked clothes as the students deboard to collect sediment cores in the marshes in an intermittent drizzle. White is unfazed: As a climate scientist, he has collected tree core samples amid clouds of insects in alpine woods and in Louisiana swamps with lurking alligators. He has drilled ice cores from glaciers in Greenland and the Antarctic in minus 40-degree temperatures.

As the students show off their core samples, he peppers them with questions: What can you learn from these? Can you date this core? Can it tell you the health of this ecosystem?

“I could totally see myself in those students,” White said later.

The tour of the Institute of Marines Sciences, EMES’ coastal research facility, was part of White’s introduction to Carolina and the vast reach of UNC’s largest school. The College is home to 43 academic departments and curricula and numerous centers and institutes, and White has been a quick study in his first few months on the job, meeting countless faculty, students, staff and alumni as he orients himself to his new home.

White came to UNC-Chapel Hill from the University of Colorado Boulder, where he was acting dean of the College of Arts and Sciences for five years.

“Jim’s accomplishments across his 34-year career at CU Boulder are too numerous to count,” said his old boss, Philip DiStefano, chancellor of CU Boulder. “As acting dean, he led the College of Arts and Sciences through a period of great change, including the COVID-19 pandemic, and did so with empathy, integrity and foresight. He helped us to implement a new governance structure for the college and helped Arts and Sciences find long-term stability across several lean budget years. He consistently championed diversity, equity and inclusion across the college.”

A member of the geological sciences faculty at Colorado, White previously directed CU Boulder’s Institute of Arctic and Alpine Research and founded and directed the Environmental Studies Program. (At UNC, he is a faculty member in EMES.)

Other colleagues praised his consensus-building skills. “Jim is the person who can take a group of people grappling with a difficult situation within the University system and reach a consensus where everyone feels good about the result,” said Gifford Miller, distinguished professor in geological sciences at CU Boulder.

White’s research interests are broad but revolve around the use of environmental stable isotope ratios. His contributions to the field are vast; Web of Science ranks him as a highly cited researcher, and he was elected to the American Association for the Advancement of Science in 2014. He is a popular public speaker on climate change topics.

White was chosen after a national search to lead the College upon the retirement of Dean Terry Rhodes.

“I wanted to come here because Carolina has an outstanding reputation—not just for the excellence of its liberal arts education but also the exciting research that is happening here,” said White.  “I was impressed by the new IDEAs in Action curriculum [see story, page 2], by the leadership of both Chancellor Kevin Guskiewicz and Provost Chris Clemens — who both came into their roles from the College — and by the devotion and commitment to this place that I heard from everyone during my campus visits.”

Guskiewicz, in turn, said of White: “Jim has hit the ground running, impressing people with his keen insights about the College’s strengths and challenges. He is a strategic decision-maker who is carefully listening to the dreams, aspirations and goals of our students, faculty and staff. Jim is emphasizing the importance of innovation and bold solutions. He has already made important contributions as part of my leadership team, and I am so glad he is here.”

White has assumed the helm of the College at a pivotal time: Not only did the school launch its reimagined general education curriculum this year — an action that will touch every undergraduate at UNC-Chapel Hill, regardless of their major — it is also returning to post-COVID normalcy: Classes are in person; study abroad has rebounded; research endeavors are running full throttle.

The College is also closing in on its $750 million fundraising goal, part of the University’s $4.25 billion Campaign for Carolina, which concludes in December.

“You cannot provide an excellent liberal arts education without providing an environment in which diverse backgrounds, ideas, cultures and perspectives can flourish,” said White. “DEI is a core tenet that starts at the dean level. It is time to make diversity an everyday part of what we do.”

When asked about other priorities for the College, White said, “I still consider myself in my learning and listening phase. It would be presumptuous of me to come in here and prescribe changes before I understood the workings of the College. My overall goal is that I want to preserve what is working well and improve on what needs improving.”