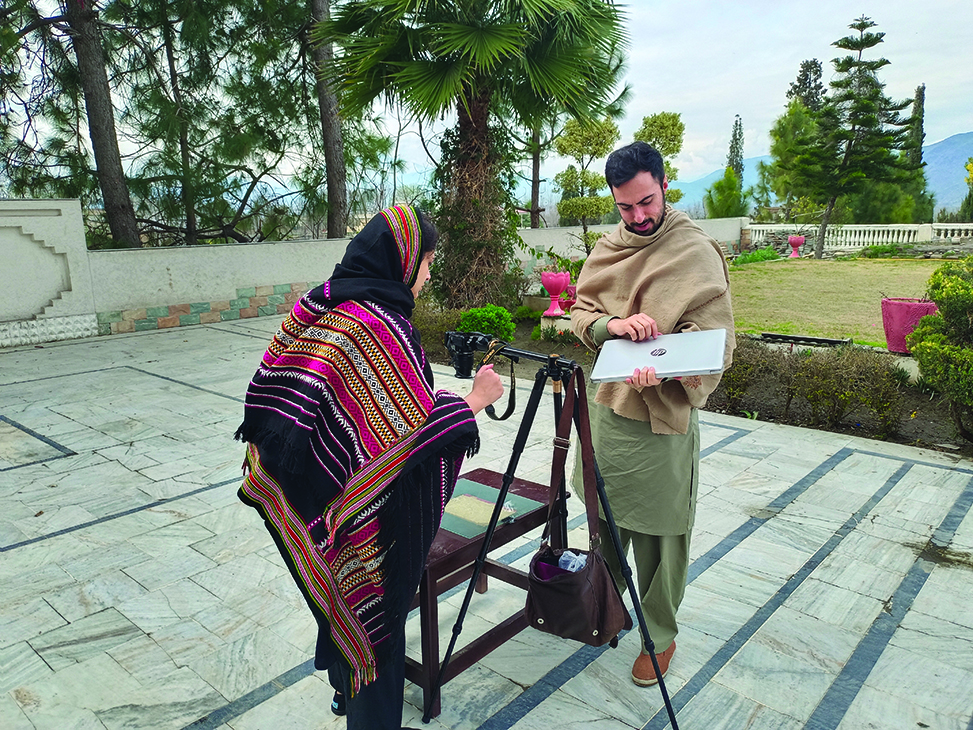 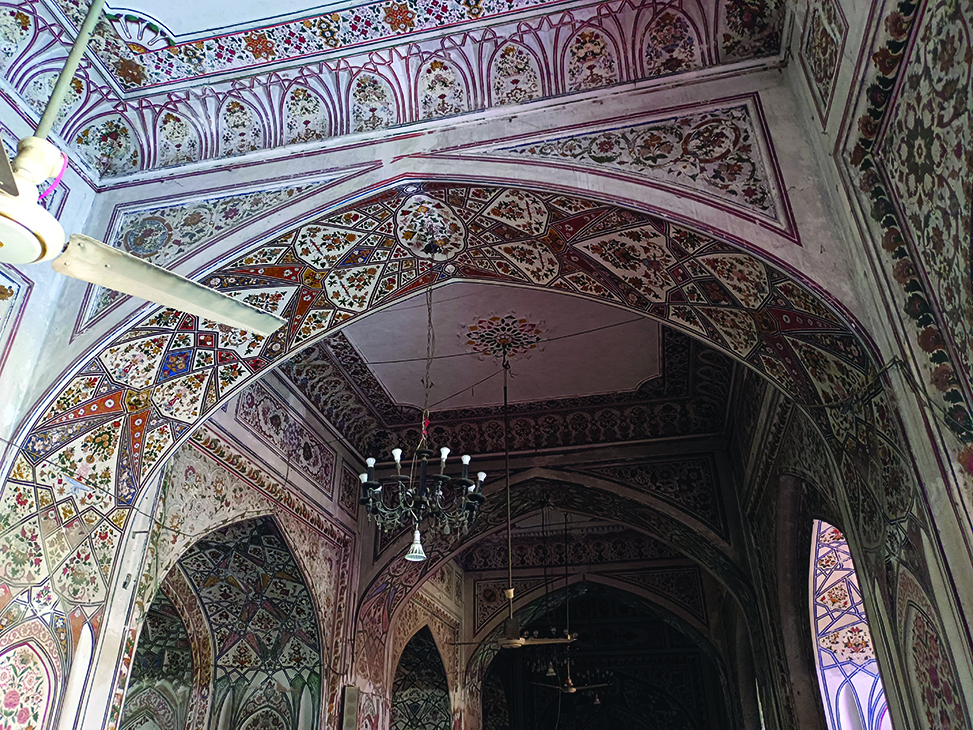 Inside the Mahabat Khan Mosque in Peshawar. 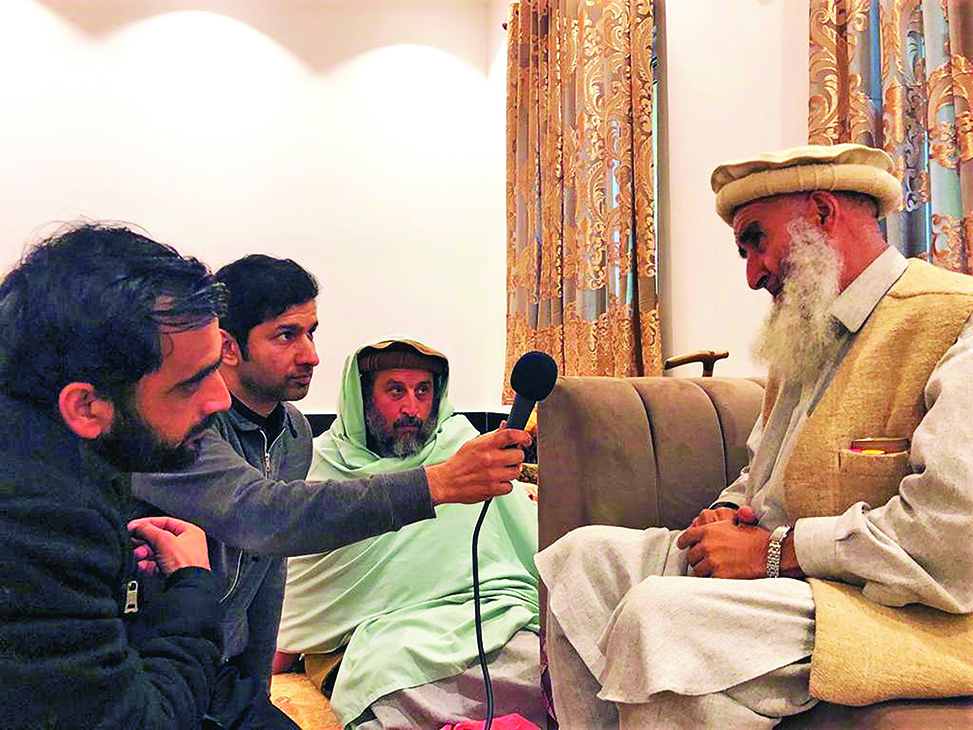 Waleed Ziad (second from left) interviewing an elder of the Naqshbandi Sufi order in Thana, Malakand. 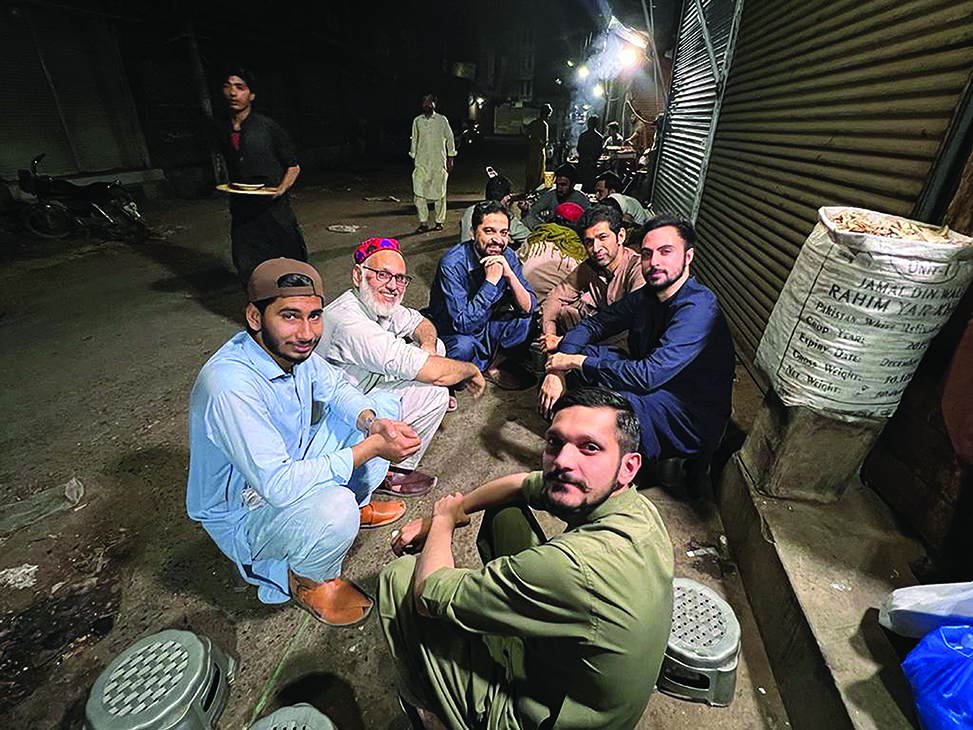 Editor’s note: This story is part of a package of stories featuring UNC researchers “in the field” in Colorado, North Carolina and on the Afghanistan-Pakistan border. Read “A new day for Old Fort” and “Crouching researcher, hidden sparrow.” 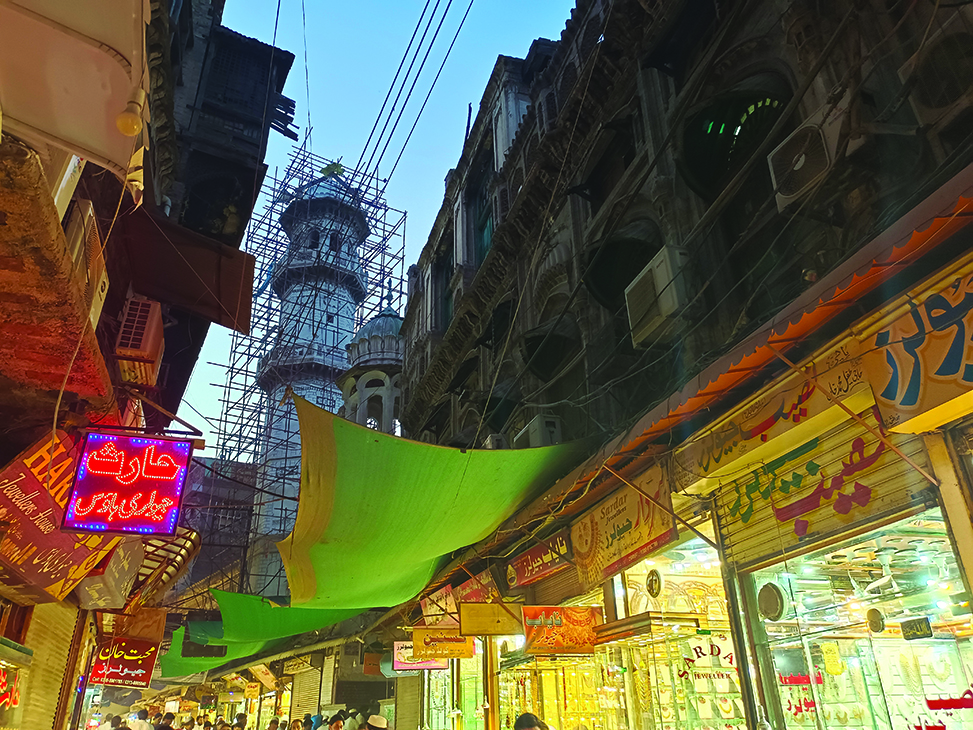 The jeweler’s market in Peshawar.

The troubled border between Afghanistan and Pakistan has a rich, complex history that belies its current association with religious extremism. For the past 120 years, colonial writers have painted the people there as inherently fanatic and violent, a narrative so potent that even local communities accept it as reality, said UNC religious studies scholar Waleed Ziad.

Ziad, who has studied religious networks in the area for many years, wants not only to change that perception and show the cultural diversity of the area, but also to help preserve its wealth of literature and artifacts in a way that makes them accessible to people all over the world.

“For 98 percent of its history, this area has been a crossroads of civilization. It is an important intellectual and spiritual center, a place where multiple languages have coalesced and through which a significant part of the Silk Road trade has passed,” said Ziad, assistant professor of religious studies and Ali Jarrahi Fellow in Persian Studies.

“It is critical for the people who live along the Afghan-Pakistan border to know that their history is not one of lawlessness, ignorance and intolerance, that they are inheriting a legacy of religious and cultural diversity which cannot be erased by a few decades of political turmoil,” he said.

With support from a Modern Endangered Archive Program (MEAP) grant from the UCLA Library, Ziad and Rustin Zarkar, UNC Middle East and Islamic Studies Librarian, are working with a team of 15 local librarians, graduate students, historians and archive custodians on site to digitize and catalogue endangered Sufi archives of the 20th and 21st centuries along the Afghanistan-Pakistan border. (Sufism is the mystical dimension of Islamic belief and practice that seeks the truth of God’s love and knowledge and fosters it in the world.)

The rich sacred materials housed there include locally produced biographies and letters, poetry, texts on subjects ranging from magic to metaphysics, art from shrines and monasteries and anti-extremist posters in the Persian, Pashto, Arabic and Urdu languages.

The inspiration for the project The ancient shrine of Ghaws Baba in Thana, Malakand.

The passion to preserve these artifacts began a decade ago when Ziad researched an important mystical network stretching from southern Asia to Siberia, based in Peshawar near the Pakistan-Afghanistan border. Today, he said, Peshawar is seen as a frontier city, but it once was the capital of one of the world’s largest empires.

During his journeys, Ziad discovered information about a local saint who until his death in 2006 lived in the heart of the tribal areas as he managed Sufi monasteries on both sides of the border. He set up a Sufi center in North Waziristan — referred to by former President Barack Obama as “the most dangerous place in the world” — where he attracted thousands of spiritual seekers, both men and women. Throughout three extremely bloody wars in the 20th century, the man taught ancient meditative practices to help people in their spiritual journeys; he wrote poetry in four languages; he resolved intense tribal conflicts; and he wrote and published books on metaphysics, philosophy and history.

Ziad wanted to understand how the mystical networks remained viable in the midst of incredible turmoil and began the quest to gather documents and talk with the man’s many disciples. That, combined with the discovery of thousands of rare works and manuscripts in a centuries-old Sufi center in Peshawar, spurred the inspiration for the current archival project.

Although the varied artifacts are housed primarily in Sufi shrines and monasteries, they embody the broader cultural, political and economic landscape of an area that was central to a large trans-national network of religion and communication — much as the Vatican Library preserves age-old information about science as well as faith, Zarkar explained. 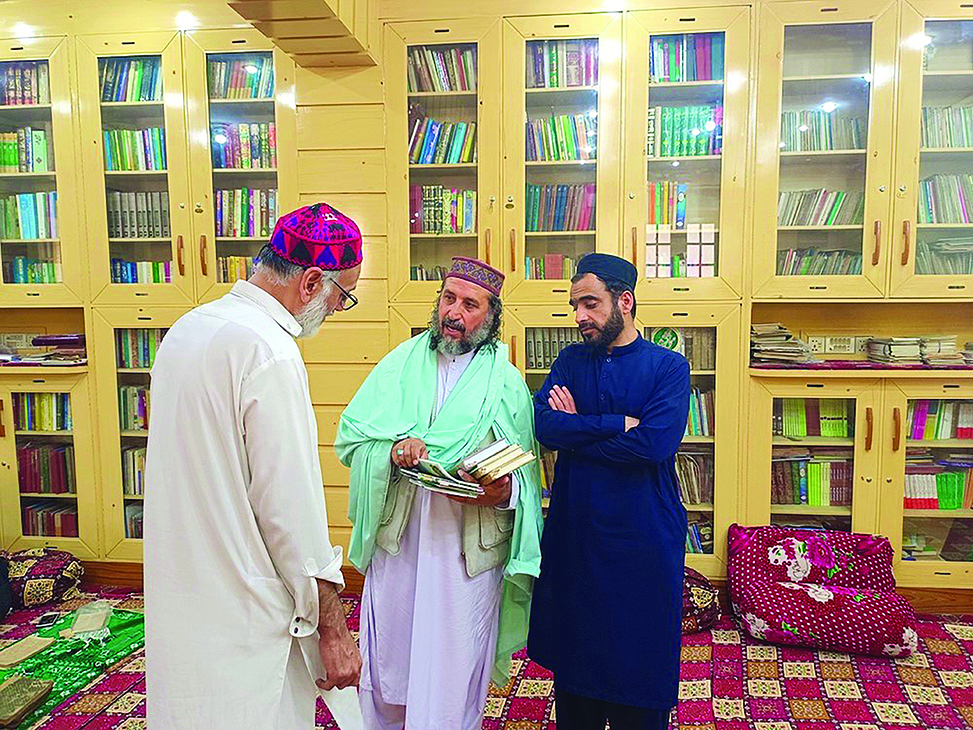 Custodians of the Peshawar, Malakand and Waziristan Sufi collections.

Ziad has spent the past six months in the region gathering information for the project, and Zarkar was there for the first five weeks to work with the local teams who would comb through the materials, organize and digitize them.

“These are people who want to preserve valuable materials so they can tell the stories to the world — people who have the technical capacity and infrastructure to handle the entire process,” Zarkar said. His role was to set up the work flows and data management for the digitizing and cataloguing processes and train the local team to perform the work for the duration of the project.

The onsite process includes using a high-resolution camera to capture images, which are uploaded to a computer database. A black canvas cover blocks reflections on the glass plate that holds each artifact, and a series of lights is rigged to provide consistent lighting day and night. Setting up the ideal apparatus took more than a month.

While the digital files ultimately will become available worldwide, the materials will not leave home. This post-custodial model, as it is known, allows the people who have the greatest stake in the materials to care for and hold onto them.

Within the first six weeks alone, the team digitized more than 10,000 pages from library collections as well as shrine artifacts and gravestone art. When the two-year project is complete, the digital assets will be housed on a new interactive multilingual English, Persian/Dari and Urdu website that walks users through the sacred geography and history of the shrines and monasteries. 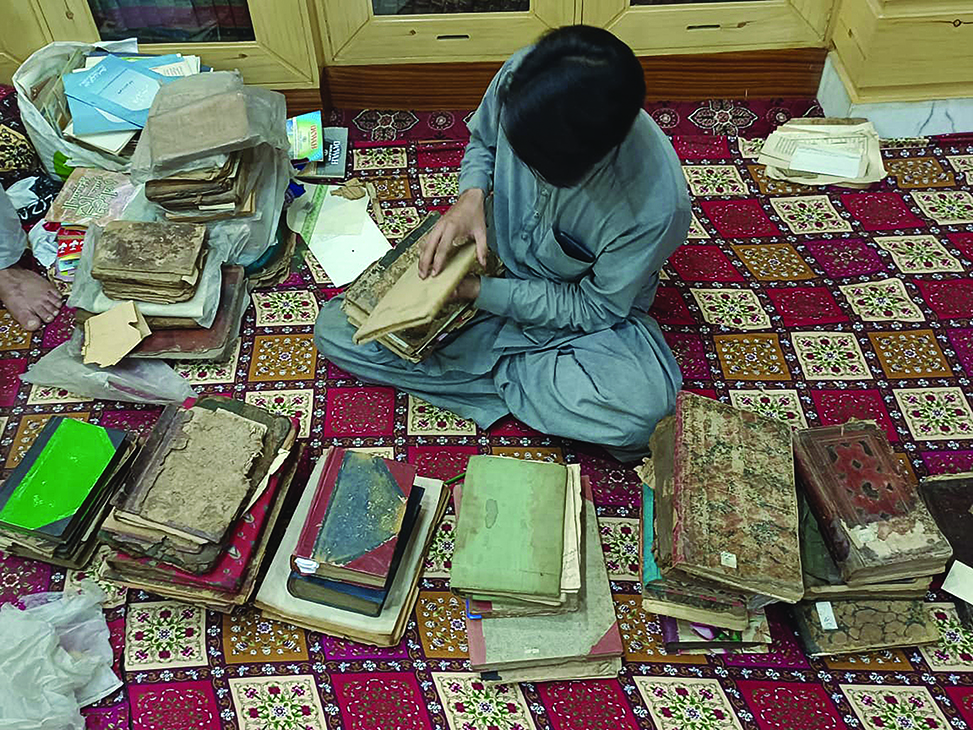 The libraries at UNC and UCLA also will have access to the files. Carolina alumna and former University Libraries post-doc Kimber Thomas, now at UCLA, is the program manager for MEAP and assists with any troubleshooting in the field and ensures that the images and metadata meet library standards.

Ziad and Zarkar are working with UNC’s Center for Middle East and Islamic Studies to organize a lecture and book showcase this academic year.

The path to discovering — and sharing — the abundance of artifacts was made possible because of the trust Ziad has cultivated with the local communities through the years. For the past six months, he has focused on three key mosque-monastery complexes in Pakistan.

One in Malakand, in the highlands north of Peshawar, is part of Buddhist sacred land. It is the birthplace of Padmasambhava, a pivotal figure who spread Buddhism in the area before the Muslim tradition was established there. The two mystical traditions flowed together through the years, Ziad said, and the team is documenting in film and photography both Buddhist and Muslim sacred sites there.

In Peshawar, the team is focusing on exceptionally rare books and manuscripts held at the largest monastery library in the city. And in a third location, the focus is on preserving materials acquired from North Waziristan. Ziad will return to the region this winter to document the sacred sites and shrine art there.

Nazia Akram, an archival photographer and filmmaker, is working with Ziad to produce two documentaries highlighting the team’s discoveries: one on the modern saint of North Waziristan who spent 70 years writing and teaching in the midst of three wars, told from the perspective of people who knew him; the other on female Sufi leaders in the area, which will be the basis for Ziad’s next book on Afghan female scholar-saints.

Already, Ziad has scoured the Indus Valley regions in hopes that future funding will support that project. “We are visiting libraries and collecting oral histories to understand what’s out there,” he said. “One library of 20,000 manuscripts has already put its resources at our disposal.”

On campus, the University Libraries is the beneficiary of work tangential to the archival project. Zarkar met with publishers in and around Peshawar and acquired some 300 books in multiple languages for Carolina. “The books came from an area where we don’t usually collect and in languages we can’t always access,” he said, “and the material will be available to any scholar anywhere who is conducting research of or in that area.”

Both Ziad and Zarkar see the archival project as a model for international collaboration that prioritizes using the expertise of local people and keeping the material accessible to those who produced it.

“The area we are researching is a rich, multidimensional land with tremendous resources and skillsets on the ground to preserve the material,” Ziad said. “I am in awe of the librarian heading the project in Peshawar, the way he mobilized the manpower and found people who have worked with Arabic, Persian and Pashto materials and brainstormed solutions with us. We truly could not do this on our own.”