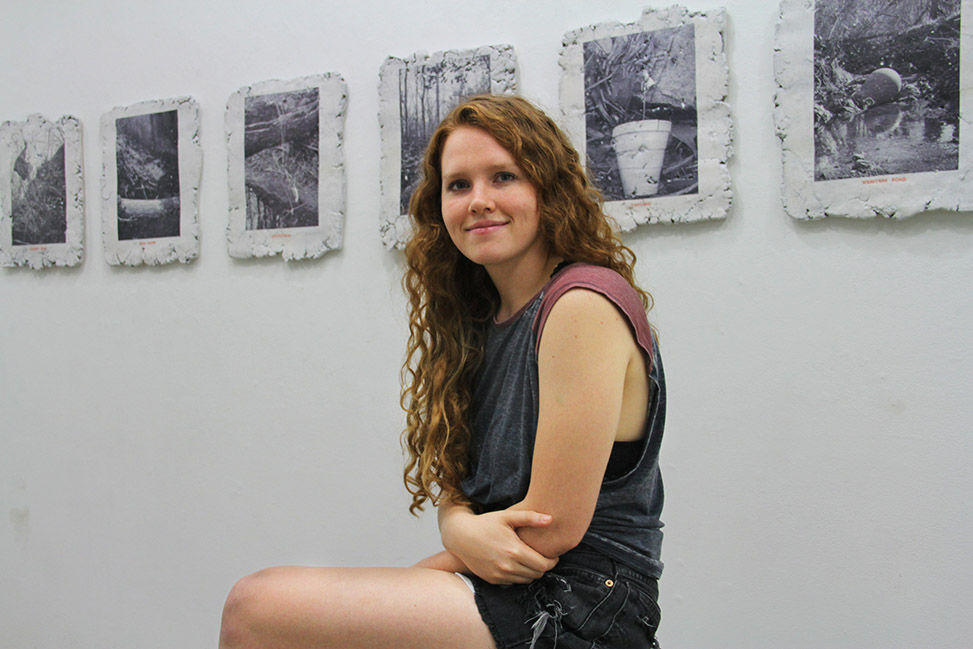 Meredith Emery combines art and science in her work. “I want to plant a seed — an idea of change and awareness about our relationship to the environment.”

When Meredith Emery accompanied geography researchers to photograph them conducting fieldwork, she couldn’t believe the amount of litter strewn along streambeds and forest lines. Now she’s sharing these images through a multimedia project blending art and science in an effort to change how the public relates to the local environment.

In the quaint 1,350-person town of Swepsonville earlier this spring, researchers knelt along the water’s edge of a small stream, collecting data from sensors they’d placed earlier in the year. Off to the side, Meredith Emery lifted her camera and clicked rapidly, focused on something else completely: a corded telephone tangled in the branches of a fallen tree.

“It was such a bizarre thing to see in a stream,” she said. “Why is that there? Somebody’s memory and experience is integral to that moment. It provokes a lot of questions, and I like that aspect of it.”

She pointed to the juxtaposition within that image, which is now hanging in the UNC Art Lab, and how it signifies the sometimes tense relationship between people and their environment. Other images are displayed alongside it: a basketball at the water’s edge, a Styrofoam cup filled with trash, a plastic bag caught in a tree.

Emery captured these images while accompanying UNC geographer Diego Riveros-Iregui and his team as part of a research project for the state to uncover why algal blooms were forming in Jordan Lake. When Emery, a senior studio art major and geography minor, asked Riveros-Iregui if she could get involved, he said she could take pictures of the stream sites. 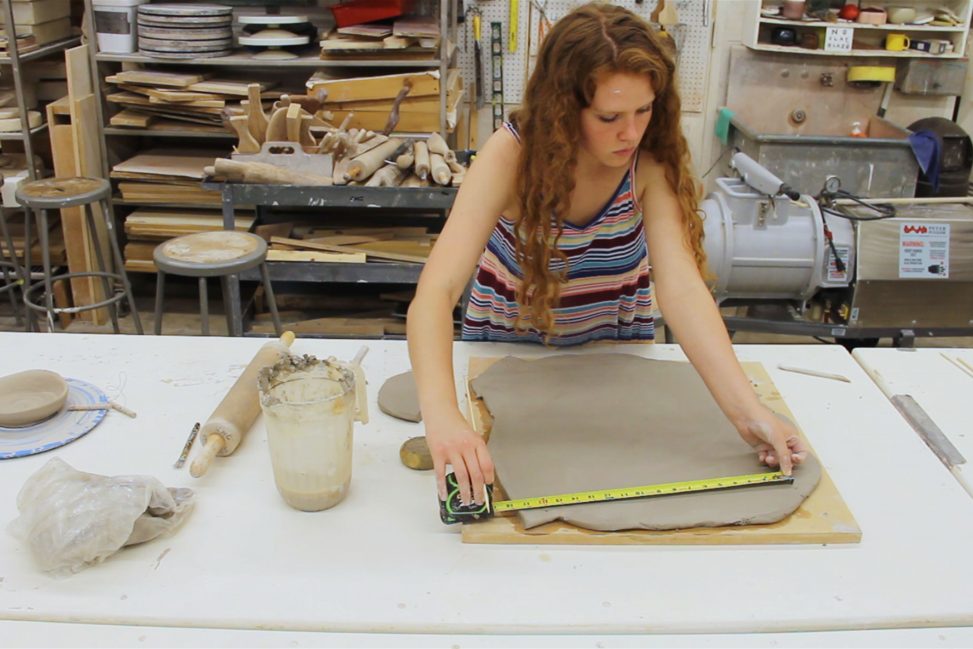 Emery prepares a clay slab in the UNC Art Lab.

More than 800 photos later and with funding from a Summer Undergraduate Research Fellowship from the Office for Undergraduate Research, she has taken 15 of those images and affixed them to rectangular clay slabs. Before adding the images, she spent hours crafting each slab, meticulously packing the clay with sand, pebbles, twigs, grass and coffee for a more organic look. Using letterpress blocks, she then stamped each photograph’s location along the bottoms in red.

Natural cracks from the kiln firing also cover all 15 pieces, an effect that adds to the organic feel of the sculptures. This part of the process, though, proved to be more difficult than she expected — a few of the tablets broke in the kiln. “The biggest lessons for me always lie in the failures of my artistic process,” she said. “Patience and learning to quickly let go of the disappointments are necessary. If something fails, you just have to take it in stride and make it work.”

But with the frustration comes gratitude. This project has helped Emery figure out what kind of artist she wants to be. “I want to make art that’s educational,” she said. “I think the power of the image and the power of art, in general, moves people in a way that is crucial to helping promote science.”

Viewed together, these images point to the connectedness of all these water bodies and the reason researchers are studying streams and not Jordan Lake itself. To investigate the larger problem, they need to examine all the sources.

Emery hopes to showcase this project at the North Carolina Botanical Garden or another local public space. But first she plans to add an audio component that includes soundbites from residents of the surrounding communities and natural sounds from the sites.

“In that way, you are transported to the space itself,” she said.

“I know it’s going to be hard to compel change in people. I want to plant a seed, though — an idea of change and awareness about our relationship to the environment.”

Watch a video about Emery’s work.