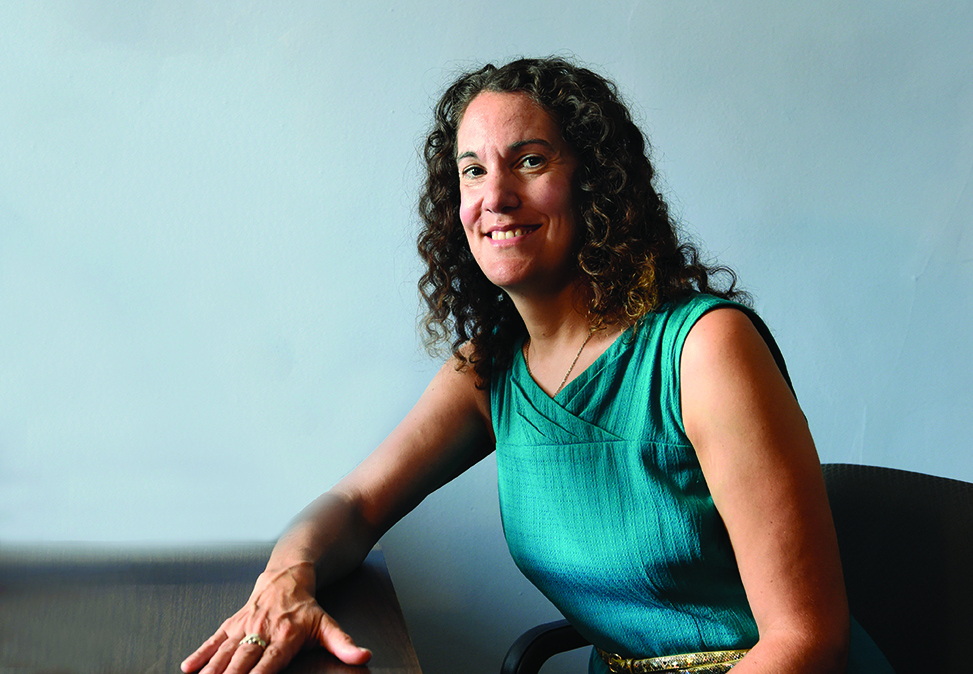 Ariana Vigil says teaching Latino literature allows her to draw from multiple academic areas and personal experiences. She is of European/Jewish and Chicana/Mexican ancestry. (photo by Donn Young)

Creating community in the classroom

Ariana Vigil, chair and professor of women’s and gender studies, remembers teaching a course in 2016 on “Gender, (Im)migration and Labor in Latina/o Literature” and an important insight that her Carolina students shared during that course.

In their discussions, students kept returning to the portrayal of mothers. Vigil said her goal had not been to talk about mothers, but the class discussion got her thinking about how migrant mothers are portrayed and how they defy stereotypes.

From that unexpected (and appreciated) class observation, Vigil has now begun a project on migrant mothers.

Throughout her academic career, Vigil has explored questions of equality, diversity and gender, and economic power, military power, media representation and transnationalism as they relate to Latina/o communities. Among her many publications are three books: War Echoes: Gender and Militarization in U.S. Latina/o Cultural Production (2014), Understanding Francisco Goldman (2018) and Public Negotiations: Gender and Journalism in Contemporary Latina/o Literature (2019).

In her first book, she examined Latina/o responses to U.S. military intervention in Central America and the Middle East, and that work established her as a Latina/o military scholar. “To this day, people come to me to talk about militarization. I think I helped create a subfield of importance.”

In research for War Echoes, Vigil read extensively from reporters’ accounts of U.S. policies relating to Central America in the 1980s. She became interested in the ways journalism engages with Latina/o literature and in the ways media outlets advance (and fail to advance) important issues within these communities. Her research led to the ideas within her book Public Negotiations.

Vigil recently was named the Druscilla French Distinguished Professor in Women’s and Gender Studies, effective January 2023. She said she leads and teaches within a department covering many disciplines, including literature, history, sociology and psychology. “Our students inspire us with the work they are doing, and our faculty are very diverse.”

She moved from her home department of English — and halfway across the country, from the University of Nebraska-Lincoln — to join the UNC-Chapel Hill faculty in 2011.

One factor that drew Vigil to Chapel Hill was the opportunity to become affiliated with the UNC Latina/o Studies Program. In addition to her bachelor’s, master’s and doctoral degrees in English, Vigil has concentrations in Latina/o studies and feminist, gender and sexuality studies.

“I am of European/Jewish and Chicana/Mexican ancestry — from my mother and father, respectively,” she shares on her website.

Teaching Latina/o literature allows Vigil to draw from multiple academic areas and personal experiences. She focuses on diverse communities, including Mexican American, Dominican American, Puerto Rican and Colombian American experiences. Students have many different reasons for taking her courses, she said, adding that they usually fill to capacity.

Vigil also is an executive board member on the Carolina Latinx Faculty Council.

Vigil said she values the ways her research creates community within the classroom — and beyond. During the pandemic, she has spoken virtually to Carolina’s Hispanic Student Dental Association and Chapel Hill-Carrboro City Schools on “Latinx in the U.S.” She also gave a virtual presentation on women’s and gender studies for a conference in the People’s Democratic Republic of Algeria.

“I enjoy creating community and working with people. That is who I am,” she said. “I do hope that my work contributes to people understanding their place in this world and the forces that shape the community in which we live.”