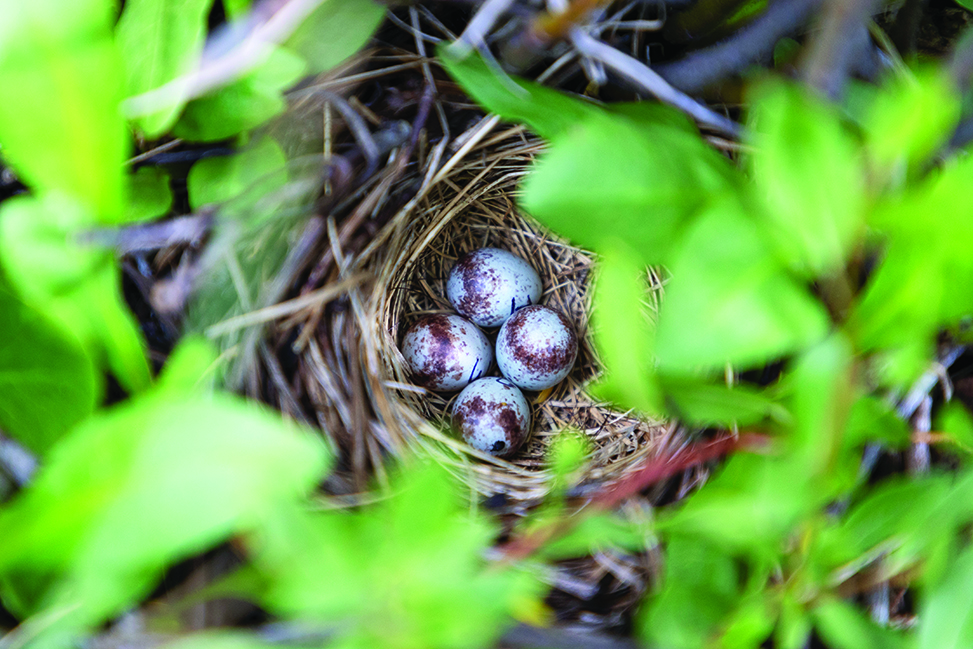 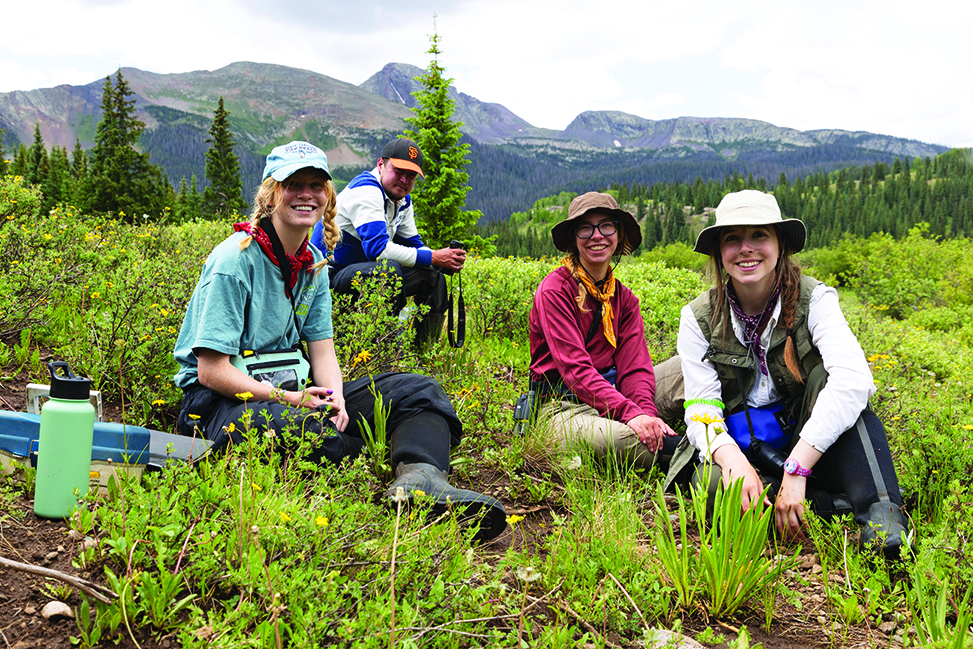 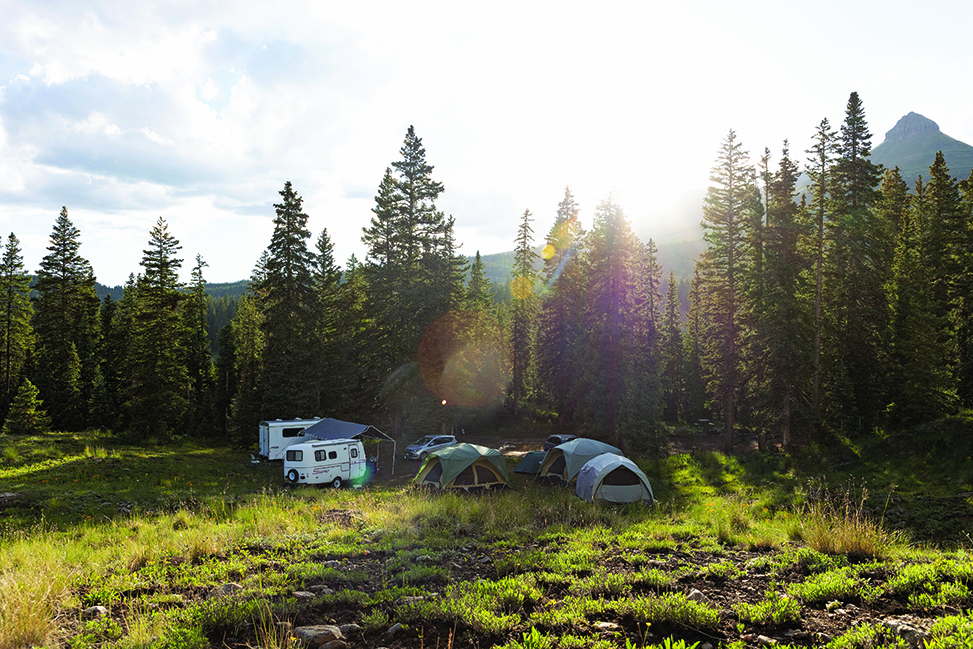 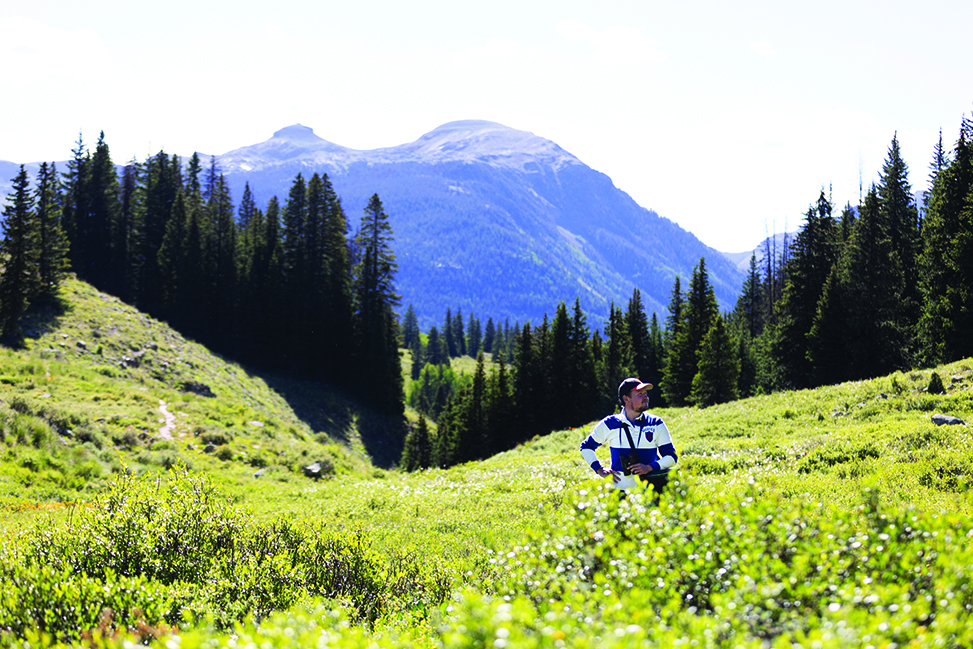 Nico Frasson searches for the birds near one of their nesting sites. (photo by Alyssa LaFaro)

Editor’s note: This story is part of a package of stories featuring UNC researchers “in the field” in Colorado, North Carolina and on the Afghanistan-Pakistan border. Read “A new day for Old Fort” and “Preserving endangered manuscripts.” 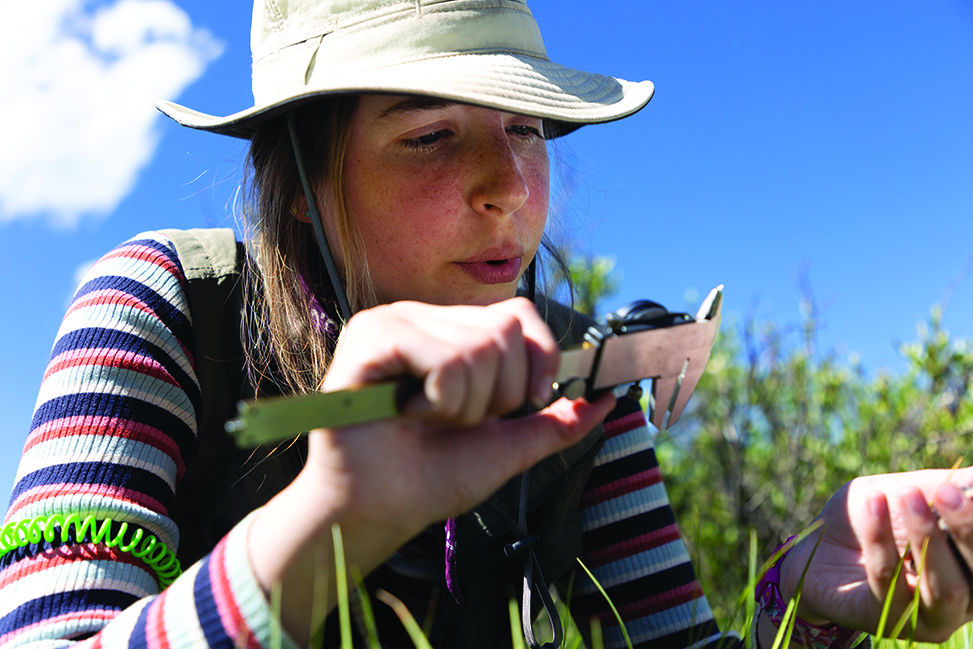 Emma Reinhardt, a doctoral student in biology, spent summer 2022 studying the birdsong of Lincoln’s sparrows in Southwest Colorado to determine if the order of notes in a song matters and how songs evolve over time. (photo by Alyssa LaFaro)

In the San Juan Mountains near Silverton, Colorado, four UNC-Chapel Hill students wake at 5 a.m. to melodic phone alarms and amble out of their dew-soaked tents. They sleepily shimmy into rainproof jackets, pants and knee-high rubber boots. After breakfast, they clamber into their white van to head to the field site a half-mile down the road.

Armed with notebooks, binoculars and a directional microphone, they hop on the Colorado Trail near Molas Pass and make a 10-minute trudge through shin-high grasses slick with frost before plopping down in a meadow. Then, they listen for birdsong.

This is the first of many research activities the students will engage in throughout the day. They’re here as part of biologist Keith Sockman’s lab, collecting data on elusive Lincoln’s sparrows.

For Sockman and his lab, Lincoln’s sparrows are a goldmine of information. But getting to them isn’t easy. Their nesting site sits at nearly 11,000 feet, so the air is thin and, like most mountain ecosystems, the weather is unpredictable — even in summer. The small brown birds with striped heads nest on the ground at the base of chest-high woody bushes in an open wetland. Hunting for their tiny nests can be a grueling, hours-long process.

Sockman has been studying this population of sparrows since 2005 and has made multiple discoveries during that time. Egg order, for example, matters. Lincoln’s sparrows typically lay one egg per day for four days. The first egg is least likely to hatch, while the fourth is least likely to fledge the nest. Hatching order also predicts bill shape. Last-hatched nestlings have wider, flatter bills than their older siblings, which can make their songs less attractive to potential mates.

But the most important discovery, according to Sockman, is that a female Lincoln’s sparrow will modify the size of her egg based on how previous eggs performed — which shows their ability to adapt, something called plasticity.

“By studying one population for a long time, I can make more ecologically important discoveries,” Sockman says.

This year, two of Sockman’s Ph.D. students are collaborating with him and running their own projects in the process. Emma Reinhardt is recording male birdsong and remixing it randomly to study its evolution and determine if the order of notes in a song matters. Nico Frasson is collecting tissue samples to identify where the birds migrate in the winter to learn how migration affects health, survival and breeding success. They are accompanied by two undergraduates — junior Torin O’Brien and senior Colleen Whitener.

They spent six weeks primitive camping through hard rains and cold nights, waking up in the pre-dawn hours to record as much as they could about these little brown birds. 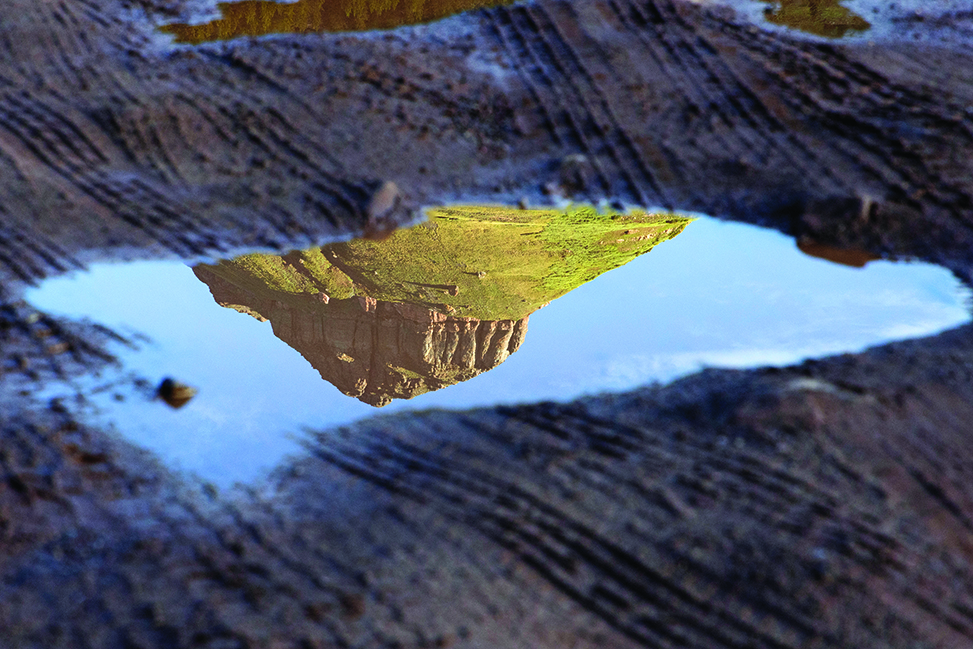 A view of a mountaintop near Spencer Peak reflects in a parking lot puddle at the Molas Pass trailhead. (photo by Alyssa LaFaro)

“Over there!” Reinhardt whispers excitedly to the group.

In unison, they lift their binoculars. A male Lincoln’s sparrow has just flown into a nearby tree. Reinhardt creeps across the meadow to a neighboring bush and hides a turquoise speaker among the branches. After rejoining her teammates, she signals to Whitener to start recording and presses “play” on her iPhone. Birdsong emanates from the small speaker and eventually, after a minute or two, the male sparrow flies down to the bush and listens. Then, he begins to sing a beautiful, complex song.

This is Reinhardt’s second field season at Molas Pass, and she couldn’t be more excited. She began her Ph.D. program at UNC-Chapel Hill in 2020 — a time when she didn’t know what the next day would bring, let alone when a field season would happen. During that period, Sockman suggested she begin listening to his past recordings of Lincoln’s sparrows and how they use syllables, the repeating segments within their birdsong.

One song contains anywhere from four to eight different syllable types, which can vary in the number of times they’re repeated and their position in the song. As Reinhardt dove into decades-worth of Sockman’s data, she grew more and more entranced. At first, she wanted to know how the syllables changed over time and began creating a lexicon of the birdsong.

“It’s almost like an evolutionary tree for the sounds these birds are making,” she says.

This stimulated more and more questions. Are new syllables appearing in later years? And if so, are they similar to the ones from previous years?

“I noticed that some of these syllable types will only occur in the first part of a song, or they’ll only occur adjacent to another syllable type. I found that interesting — that it was so highly stereotyped. Even though there’s a high variability between songs and between males, they tend to stick to the same syntax.”

Syntax is how words and phrases are arranged to form a sentence. Reinhardt wants to know if syntax matters in birdsong and how females’ mate selection influences both sexual and cultural evolution.

“There is some evidence of syntax in songbirds, but it’s understudied and not well understood,” she explains. “I think there’s a general assumption that birdsong lacks complexity, that birds are just kind of repeating things they know, and that order doesn’t necessarily have meaning. It would be interesting if we could show that order really does matter, and that syntax conveys salient information for when females are selecting mates.”

To study this, Reinhardt remixes previously recorded birdsong from Lincoln’s sparrows using a random number generator. She also uses a standard, unmixed recording that acts as a control. Then, out in the field, she plays these tracks — the scrambled song on one day and the control on another — and records the responses and behaviors of male Lincoln’s sparrows.

Reinhardt delights in the fact that the sparrows are responding to the recordings at all. She wasn’t sure her experiment would work. Now back in Chapel Hill, she is analyzing the recordings she collected. 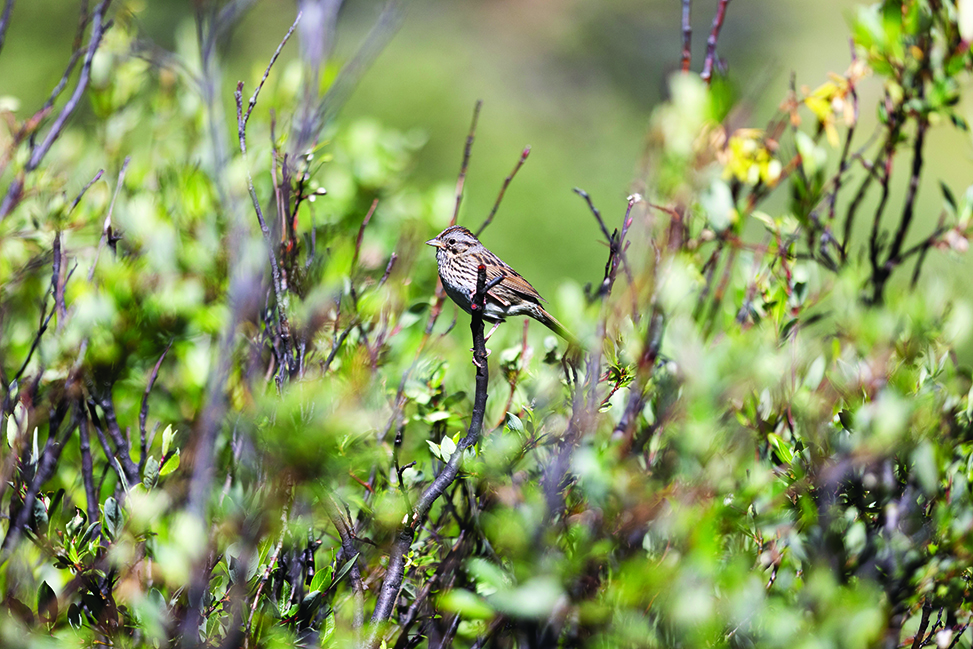 An adult Lincoln’s sparrow hangs out in a willow shrub near its nest. (photo by Alyssa LaFaro)

Each morning, Frasson is the first one out of his tent — about 15 minutes earlier than his fellow researchers — to soak in the quiet. He uses this extra time to gather his thoughts and make tea for the team, which he hand-delivers to each member before they depart the campsite.

After completing his biology degree in France, Frasson explored his interests to figure out if he wanted to attend graduate school. He worked with labs across France, Italy, Canada and the United States, studying a variety of animals, from small fish called sticklebacks to elephant seals.

Now a first-year Ph.D. student at Carolina, Frasson focuses on physiology, behavior and speciation — how populations diverge to create new species. He studies this in Lincoln’s sparrows via their migration patterns, which can provide information about health and breeding. To uncover where these birds migrate to in winter, Frasson collects toenail clippings, feathers and blood for isotope analyses.

Isotopes are made up of two or more forms of the same element and are in everything — from the food we eat to the air we breathe. This means they’re a reflection of the environment an organism spends time in and can be traced through the tissue samples Frasson collects.

Frasson and Reinhardt capture Lincoln’s sparrows two ways. The first involves laying 50 strategically placed traps along a 1.5-mile route that encircles the field site and resides near nesting areas. Each morning around 7:30 a.m., when Reinhardt wraps up her birdsong experiments, the undergraduates head out to open the traps and bait them with birdseed.

On a good day, they catch four to five Lincoln’s sparrows. When they do, they carefully remove them from the trap and check whether the bird has been banded with a bracelet with a federal identification number. If it hasn’t, they give it one so they can track it over the course of its life and upload the data they collect to the U.S. Bird Banding Laboratory’s website.

They proceed to take a series of measurements, including the bird’s weight and the size of its beak, legs, wings and tail feathers. Once they’ve recorded these stats, Frasson clips a few toenails, collects two tail feathers, and carefully draws a small vial of blood for analysis. Then, he splays his palms, and the bird soars into the sky.

For birds that elude these traps, the researchers use a mist net — a lightweight net they can place anywhere within the field site.

After a successful field day — which lasts anywhere from six to 10 hours — Frasson returns to the campsite to process his tissue samples. He pulls large, shallow boxes overflowing with glass vials out of a shared trailer and adds his specimens from the day. He pops the hood on the passenger van and hooks up a battery big enough to power the centrifuge, which spins the blood to separate red blood cells used to identify the stable isotope signature of the birds. After 15 minutes, he removes the samples and stores them in the fridge.

Then it’s time to relax — until the next day in the field.

Everyone heads to Reinhardt’s trailer to play cards, but they don’t totally escape thoughts of their flying friends — the deck features a dozen North American hummingbirds.