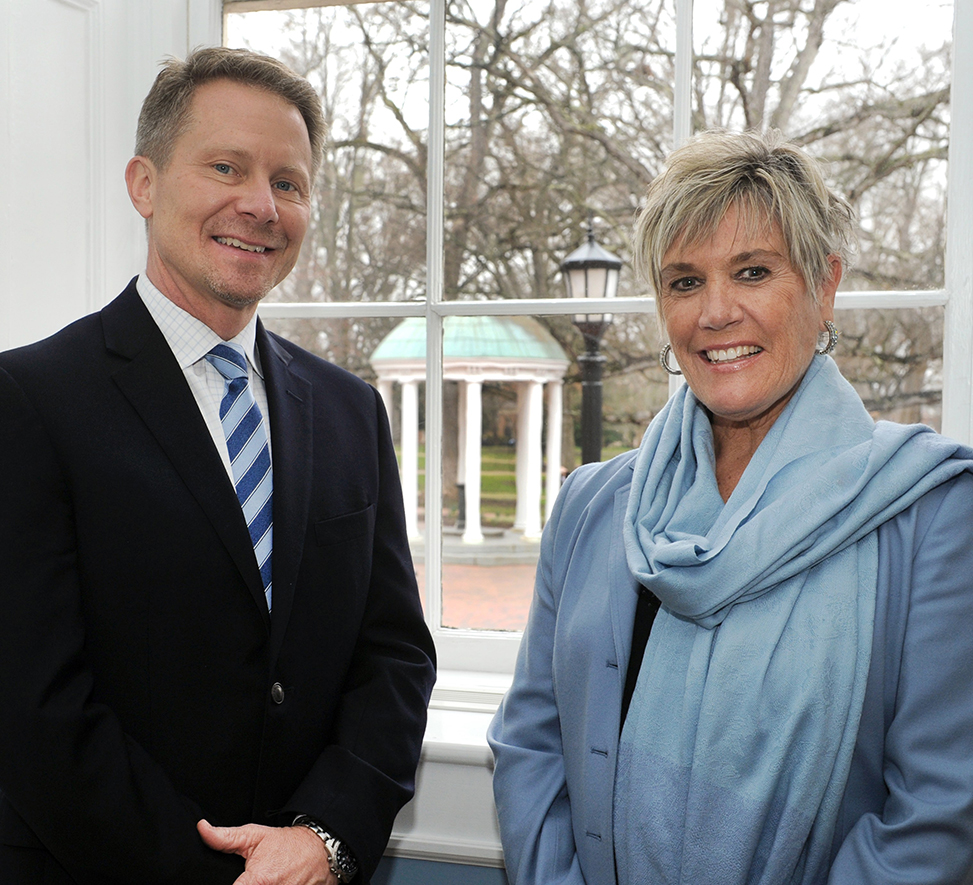 Change at the top

“It is an honor to be asked to lead the nation’s first public university into the next chapter of its storied history,” said Guskiewicz. “When I became dean, I pledged to be ‘strategic, bold and student-focused,’ and those imperatives will continue to guide me in this role.”

As dean, Guskiewicz prioritized interdisciplinary teaching and research, active learning techniques and experiential learning opportunities for students. He initiated the revamping of the General Education curriculum that is currently underway. Under Guskiewicz’s leadership, the College has raised more than $400 million in the Campaign for Carolina, well over half of its goal of $750 million.

A neuroscientist and internationally recognized expert on sport-related concussions, Guskiewicz joined Carolina’s faculty in 1995. He is the Kenan Distinguished Professor of Exercise and Sport Science and founded the Matthew Gfeller Sport-Related Traumatic Brain Injury Research Center at Carolina.

Rhodes, the first dean of the College to be named from the fine arts, has championed the value of the arts and humanities to a well-rounded Carolina education throughout her long career at Carolina.

“I look forward to advancing the great initiatives we already have underway in the College begun under Kevin’s Road Map to Boldness strategic plan — as well as introducing new ones that showcase our strengths and talents in research and teaching across the disciplines,” said Rhodes.

Rhodes was first appointed senior associate dean by Dean Karen Gil. A Carolina alumna and parent, she has been on the faculty of UNC since 1987. She has since served the University in a variety of roles, including as a member of the voice faculty, UNC opera director, chair of the music department and faculty marshal.

She is the principal investigator on the Humanities for the Public Good initiative [see pages 4-5] from the Mellon Foundation, which seeks to bridge the silos between academic research, teaching and the communities they serve. She was co-PI on the Carolina Digital Humanities Initiative, also funded by Mellon, which created partnerships and programs that promote innovation, interdisciplinary connections and collaboration around digital teaching, research and outreach. In 2016-17, Rhodes led the steering committee for Carolina’s Human Heart: Living the Arts and Humanities, a yearlong celebration that showcased how the arts and humanities can help us address the major issues of our time.

Rhodes has also worked closely with the College’s director of faculty diversity initiatives and the departmental diversity liaisons on matters of faculty recruitment and graduate student admissions. She received the University Diversity Award in 2011.

A native of Raleigh, Rhodes earned her bachelor of music degree from Carolina and her doctor of musical arts and master of music from the Eastman School of Music at the University of Rochester. Rhodes, a soprano, has taught and performed throughout the Balkans and Eastern Europe, as well as in Spoleto, Italy, for the past 15 years.

To fill her previous position, Rhodes named Elizabeth Engelhardt, John Shelton Reed Distinguished Professor of Southern Studies and chair of the department of American studies, as interim senior associate dean for fine arts and humanities. As chair, Engelhardt oversaw innovations in graduate education and collaborations with Wilson Library and the Ackland Art Museum, as well as the yearlong 50th anniversary celebration of American studies.