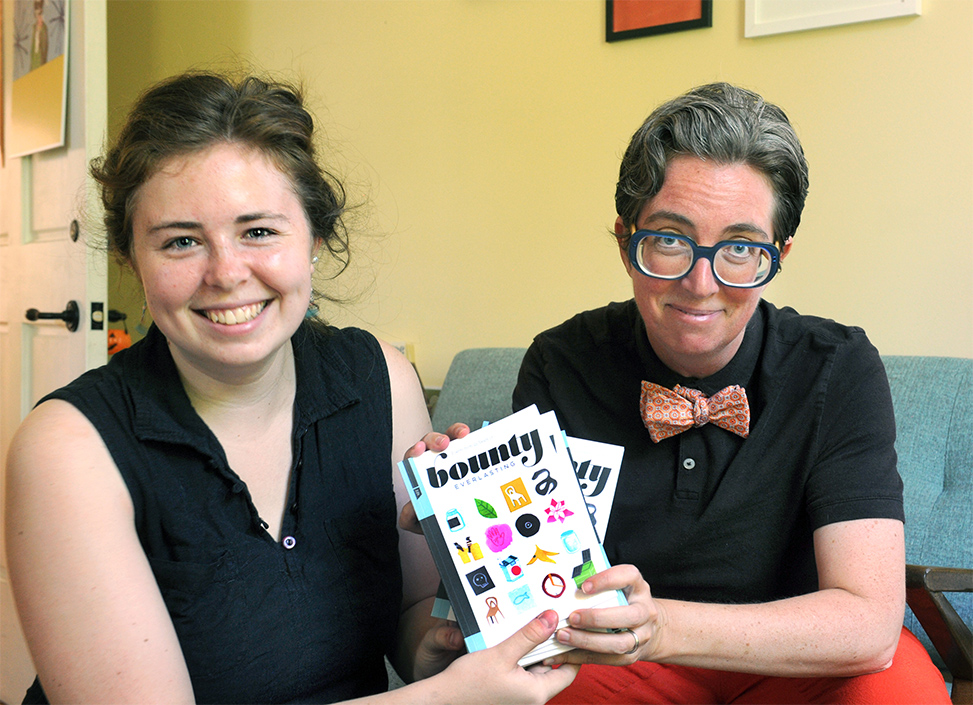 Marina Greenfeld (left) and Gabrielle Calvocoressi pored over issues of Southern Cultures to select 16 poems for a celebratory chapbook. (photo by Donn Young)

A bounty of good poems

Co-edited by a creative writing professor and an undergraduate student, a chapbook celebrates 25 years of Southern Cultures quarterly.

When Gabrielle Calvocoressi began co-editing the poetry collection Bounty Everlasting, created to celebrate 25 years of the quarterly Southern Cultures, she had some goals in mind for readers.

“I hope they meet some new poets, and I hope their vision of the South is expanded,” she said.

As she read over the approximately 100 poems that were printed in the publication’s pages over the years, she couldn’t believe the quality of work available for the Bounty chapbook, published last spring by UNC Press.

“I was struck that some of the greatest poets in the history of American letters had been published on their pages,” said Calvocoressi, associate professor and Walker Percy Fellow in the English and comparative literature department’s creative writing program.

Southern Cultures, a peer-reviewed quarterly of the history and cultures of the U.S. South that includes poetry as well as photo essays, memoirs and interviews, is published by UNC Press for the Center for the Study of the American South. The publication has about 1,000 print subscribers and thousands of online readers from more than 100 countries. It was founded by UNC sociologist John Shelton Reed and historian Harry Watson. Watson still serves as co-editor alongside American studies scholar Marcie Cohen Ferris.

As the poetry editor of Southern Cultures for two years, Calvocoressi co-edited Bounty with undergraduate Marina Greenfeld. Their initial plan was to choose 25 poems, one for each year.

“Once we got together and compared notes, however, we had a lot of choices in common,” said Greenfeld, a senior. “The 16 that we both agreed on just came together naturally.”

Greenfeld is starting her fourth year as an editorial assistant at Southern Cultures. Her contributions were so strong that the editorial team wanted to reward her with co-editorship of the proposed chapbook.

“From the minute she began working with me, it became clear to me that we were equals in this project,” Calvocoressi said.

Greenfeld, an English and Slavic languages double major with a minor in creative writing, has taken introductory, intermediate and advanced poetry writing classes and was the recipient of the Blanche Armfield Poetry Prize, awarded to the junior with the strongest application for honors poetry. She is now writing her senior thesis, a book-length collection of poetry.

Calvocoressi wrote the poetry books The Last Time I Saw Amelia Earhart, Rocket Fantastic and Apocalyptic Swing; the latter was a finalist for the Los Angeles Times Book Prize. She was a Wallace Stegner Fellow at Stanford University and won the 2001 prize for the best poem of more than 200 lines published in the Paris Review. Her poems have appeared in The New York Times, The New Yorker and elsewhere.

Greenfeld called working with Calvocoressi “such a joy! Gaby was exceedingly generous with her time and expertise … and I feel so lucky that I got to have this introduction to what it means to build a book with her.”

For Greenfeld, “The chapbook aims to be a platform for diverse voices from the past, present and future of the South to commune with each other and be heard as a collective. I hope readers are both challenged by what they encounter and consoled by something that speaks to them.”

For more on Bounty Everlasting, including how to purchase a copy, visit southerncultures.org/bounty-everlasting. UNC faculty, students and staff can access a copy for free via Project Muse.