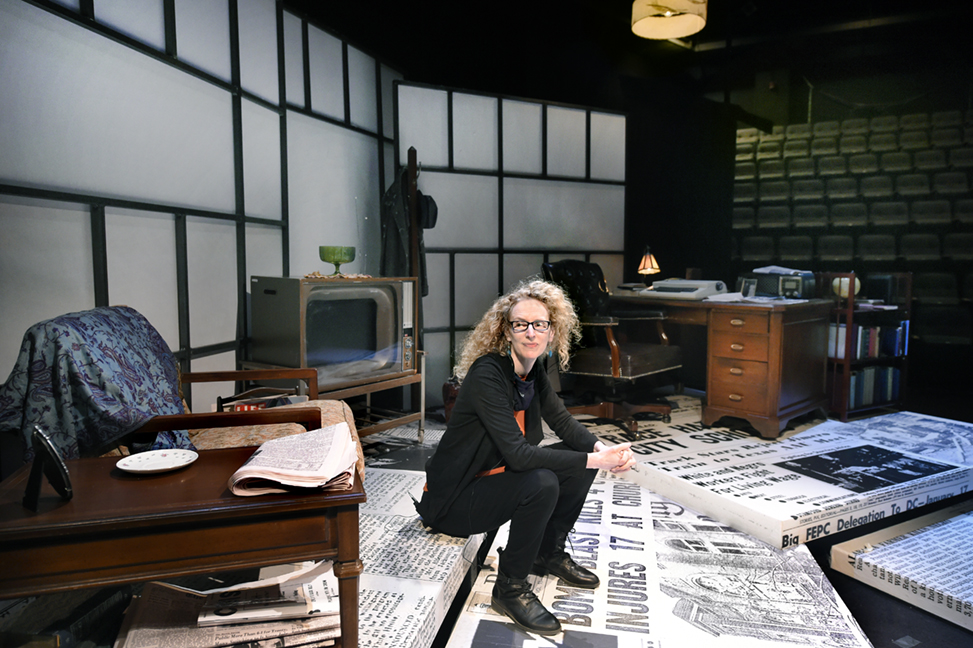 Vivienne Benesch has led PlayMakers through a difficult year while remaining committed to a goal of developing new works and showcasing under-represented voices. (photo by Donn Young) 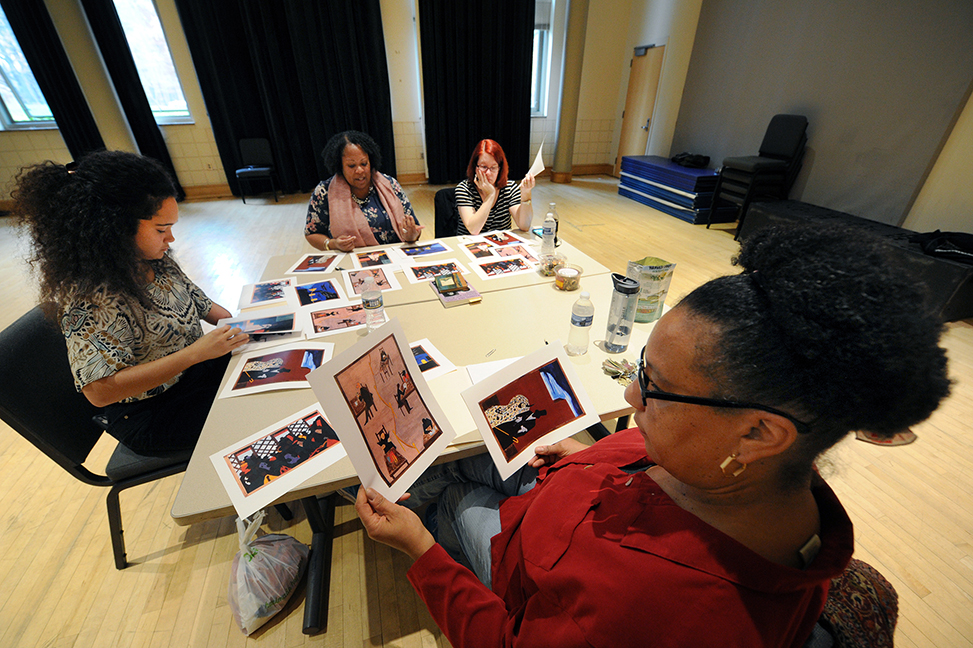 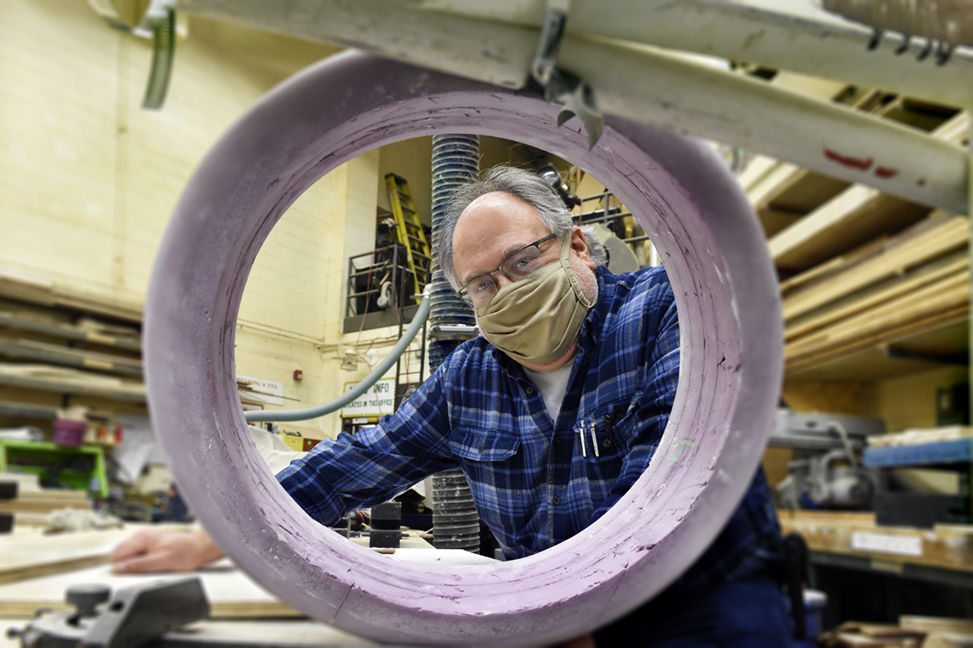 Michael Rolleri has been able to keep the production shop open safely for MFA students. (photo by Donn Young)

PlayMakers Repertory Company’s 45th season has been a season like no other. Amid a global pandemic, when other theaters were shutting down, the company programmed its first virtual season. With the theme “All Too Human,” artists have tapped into their creativity and resiliency to explore our shared humanity in these challenging times. 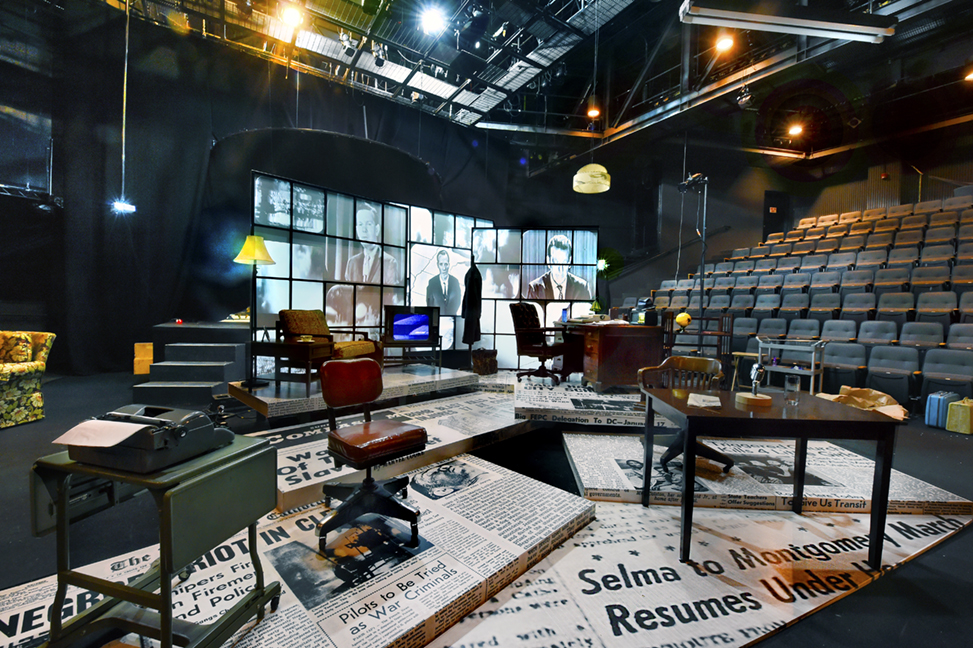 As many other theaters around the country have gone dark, PlayMakers, the professional theater-in-residence in the department of dramatic art, has kept its virtual — and in some instances, physical — doors open, serving audiences, students, staff, company members and faculty alike. In addition to an undergraduate major, the department offers three MFA programs in acting, costume production and technical production.

Last August, PlayMakers announced that its 2020-2021 season, with a theme of “All Too Human,” would be digital. Benesch has remained committed to developing new works and showcasing under-represented voices, while keeping safety as a vanguard.

The company staged an online reading of the Thomas Wolfe International Playwriting Competition-winning play The Storyteller by Sara Jean Accuardi, followed by a performance of Mike Wiley’s searing one-man show Blood Done Sign My Name. The world premiere of department of dramatic art playwright Jacqueline Lawton’s Edges of Time, filmed in the Center for Dramatic Art on the UNC campus, highlighted the life of Black female journalist and activist Marvel Cooke.

And a special Zoom performance of Nora Ephron’s Love, Loss and What I Wore featured company members alongside longtime friends of Benesch’s — screen and stage actresses Debra Messing, Marin Hinkle and Camryn Manheim, as a one-night benefit.

With a commitment toward accessibility, most of the performances have been published on the platform Sakai so they are free to all Carolina students.

“There have been some really difficult days, weeks and months,” Benesch acknowledged. “It seemed like all possibility in the beginning, with the hope of reaching people around the globe. Some of that is happening — but the downside of that is Zoom fatigue. So the goal has been to make things that stand out, that have something special to offer our audiences.”

“Keeping You Company” programming has provided additional online content for audiences to explore: “Virtually Viv” conversations — featuring artists interviewed by Benesch, “Think Like an Actor” coaching sessions with Dooley and “Stuck Monologues” — commissioned short pieces from local playwrights performed by company members. Professional Actor Training Program students developed online projects, “Some Kind of Universe,” that explored their takes on the complex world in which they were living.

Kathryn Hunter-Williams, company artistic associate and teaching associate professor, experienced the challenges of performing in a digital world in both The Storyteller and Love, Loss and What I Wore.

She returned to the stage in the Paul Green Theatre to film Edges of Time, where she portrayed Marvel Cooke. It was a special role for Hunter-Williams because she was in a staged reading of the play in 2018.

Throughout the pandemic, the company has had to navigate the ever-changing safety guidelines of the University, county, state and Actors’ Equity Association.

“For theater artists, what we do is plan, rehearse and execute — and so this has hit us in our soft spot,” said Hunter-Williams. “But we are also problem-solvers. And I sense that maybe we’ll learn to fine-tune our problem-solving in a different way going forward.”

Theater as a research “bubble”

Michael Rolleri, professor of technical production and production manager for PlayMakers, echoed that thought: “In theater, there are no problems, just challenges, and you have to overcome those challenges.” He’s been doing just that for 35 years.

MFA technical and costume production students have been able to keep working because of the nature of what they do — production areas operate much like a research lab, and students and faculty have maintained their own safety “bubbles.”

“What PPE do we need? How do we properly and safely use the copier? We broke it down very specifically — even how are we getting people in and out of the building?” Rolleri said of the precautions laid out in their operating document.

Professor and resident designer McKay Coble, who designed the set for Edges of Time, said students and professors have exemplified the idea of “resiliency.”

“I’d like to underline that idea because it may be a trait endemic to theater people. Because things can go wrong. When everything is live, the potential for that is huge,” she said.

Coble received both her undergraduate and MFA degrees from the department of dramatic art and has been with the company for 33 years, including time as department chair.

“I’ve seen some terrible budget times,” she said, “but I would say this is really something. I don’t think we can take care of each other enough during this time. I’m so proud of the people with whom I work.”

Paul Edghill is a second-year MFA student in technical production who is originally from Barbados. He toured for 25 years all over the Caribbean as a lighting designer but decided to go back to school to enhance his skills.

He’s also teaching an introductory class to undergraduates that covers sound, lights, props, scene construction and other aspects of technical production. A benefit of this remote learning world for his undergrads who are actually not in the shop — they are learning how to draft in 3D.

“We are pushing students to think outside the box,” Edghill said. “As we create a 3D set, you can see all the angles the camera would move through. We are teaching students to be savvy with technology, and when they leave UNC, they will have a skill that can transcend their current course of studies.”

‘Sweet are the uses of adversity’

Chuck Bayang is PlayMaker’s stage manager. He said his stage management mentor always used to say: “Create an atmosphere for the creative process to take place.”

Through all the different styles of productions the company has undertaken this season, Bayang says he has gone back to that thought and how to make it happen.

And sometimes that’s by trial and error — by experiencing the use of one digital platform’s quirky latency issues over another, for instance.

“I keep joking that by our 15th show, we’ll have it all down,” he said. “This whole experience has been like trying to keep your home technology system updated. You buy a new DVD player, and it’s got these new features, and then you realize you have to hook it up to 20 different cables. Then, once you do that, you realize you need to update your TV.”

Very late this season, just like last spring, the company had to pivot again.

The plan was to end the current season with Shakespeare’s As You Like It, filmed in the Paul Greene Theatre and shared online. Despite the company’s meticulous safety plan, Actors’ Equity nixed filming the production due to rising COVID-19 numbers in North Carolina.

As Benesch broke the news in a staff meeting, Tia James, who was set to direct the production, shared this quote from the play: “Sweet are the uses of adversity.” (James, a teacher of voice and acting and resident vocal coach for the company, had also performed in multiple online productions throughout the season and was Marc Antony in last year’s Julius Caesar).

The full quote is said by Duke Senior after being banished to the Forest of Arden by his brother.

“Sweet are the uses of adversity, which like the toad, ugly and venomous, wears yet a precious jewel in his head. And this our life, exempt from public haunt, finds tongues in trees, books in the running brooks, sermons in stones and good in everything.”

James said the quote spoke to her because our troubles are part of being human.

“When those troubles come, Duke Senior says there’s a precious jewel — in every situation, no matter how tough or hard, there is some jewel we can take forward,” she said. “I didn’t want the company to be discouraged that day. I was saying, ‘let’s look closer, because there might be a jewel here for us.’”

In this time of exile, part of that “jewel” has been more time to rehearse and find those “magical moments” together, she said. The company workshopped the play virtually for three weeks with the hope of filming it this August.

If all goes well, PlayMakers plans to share the play with audiences next season.

The energy of live theater

When she thinks about returning to live theater again — whenever that might be and however that might look — Benesch said it “makes her weep.” That’s exactly what she did when she had a chance to watch Blood Done Sign My Name being filmed at a performing arts center in Clayton, North Carolina.

“As actors, we are taught that communication is born of that exchange of breath. No matter how much work we do across this two-dimensional medium, that exchange of breath doesn’t happen,” Benesch said. “And so the molecules exchanged, how you are changed, isn’t the same. I’m incredibly excited about being in live theater again and letting molecules from a performance change me.

“But I also don’t want us to go back to who we were, but rather who we can be. Because I think all of our personal molecules have changed a great deal.”

Read a Q&A with playwright Jacqueline Lawton about “Diversifying the Theater.”

Students, an ocean apart, study drama and the plague