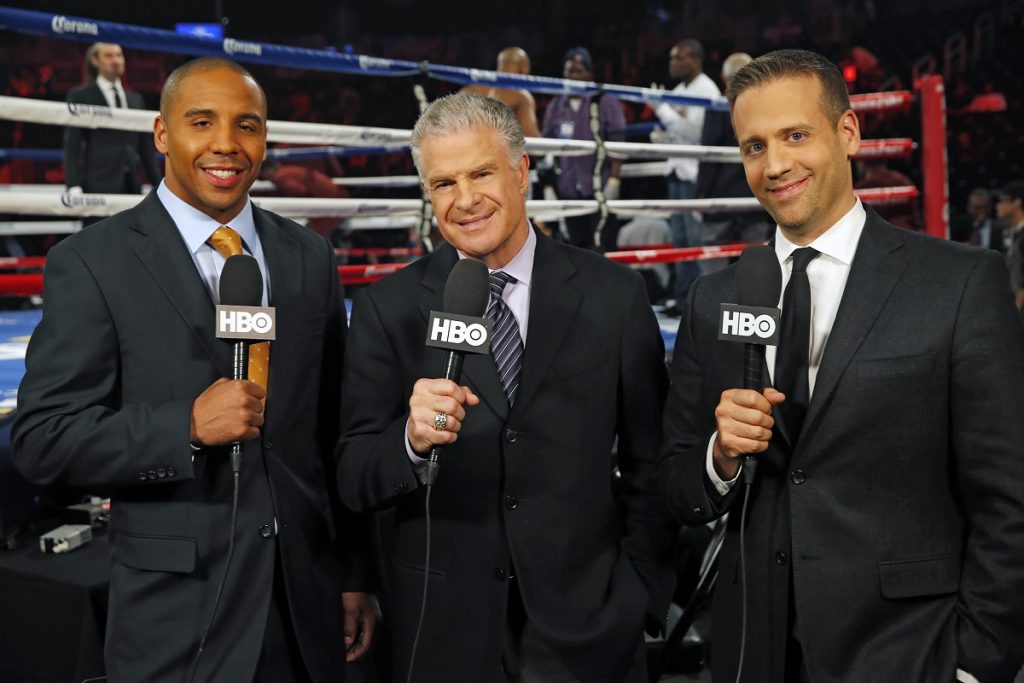 Jim Lampley (English ’71) is more poet than pugilist. But his ability with words has made him a king of the ring.

The announcer has spent four decades in network television, most recently as the voice of HBO’s “World Championship Boxing,” where he has called the blow-by-blow of many of the sport’s most significant bouts.

Lampley said his English degree has helped him to thrive in a difficult and competitive profession, as it did for announcers like the late Dick Enberg and Keith Jackson, both grammar fanatics who were so good in part because of their way with words.

“Over the years, thousands of young people have come to me looking to emulate what I’ve managed to do,” Lampley said. “I always say to them, everybody wants to do this as a sports fan. But what’s going to set you apart? Language skills.  In live television commentary, it’s all about language skills.”

Lampley grew up in Hendersonville, North Carolina. His father, a World War II bomber pilot, died when Lampley was 5, and his family moved to Miami when he was 11. At Carolina, Lampley nearly flunked out. But he loved reading novels, fiction and drama, so he majored in English by default.

“I was hoping it would stimulate me enough to go to class. … At the end of the day, that saved me – it helped me to get my act together.”

In high school, he recorded himself providing commentary as he played a tabletop football game. After college, he won a talent contest and worked as a college football sideline reporter for ABC. Later, he paid his dues on “Wide World of Sports,” traveling to novelty events such as demolition derbies and wrist-wrestling competitions.

Later, he covered 14 Olympic Games, first for ABC and later for NBC. His most memorable moment was being in the arena for the 1980 U.S. hockey victory over the Soviet Union at Lake Placid. In 1987, Lampley left ABC and landed a job at HBO.

Lampley was always a boxing aficionado. At 14, he saved lawn-cutting money to witness one of the greatest upsets when Cassius Clay – who later changed his name to Muhammad Ali – defeated Sonny Liston at the Miami Beach Convention Center in 1964.

“Cassius Clay was my ultimate hero,” Lampley recalled. “You could never have designed a bigger hero for a white kid who grew up during the civil rights movement in a small town in the South being taught to resist all the pernicious elements of racism.”

The four-time Sports Emmy Award-winner has been at the mic for many of the sport’s most dramatic moments — from the biggest upset in heavyweight championship history (Buster Douglas’ defeat of Mike Tyson in 1990) to the triumph of 45-year-old George Foreman over Michael Moorer in 1994. He was also there for the showdown between Lennox Lewis and Tyson in 2002 and an epic confrontation between Floyd Mayweather and Manny Pacquiao in 2015.

In 2015, Lampley was inducted into the International Boxing Hall of Fame. Last year, he signed a long-term extension with HBO that will keep him as the host of all HBO Boxing telecasts as well as anchoring the sport’s only studio- based interview program, “The Fight Game with Jim Lampley,” for years to come. In inking the deal, HBO Sports Executive Vice President Peter Nelson noted that Lampley’s “high journalistic standards, historical knowledge of the sport and enthusiasm for sharing the backstories of the fighters who enter the ring enriches the broadcast experience.”

Today, Lampley is based in Del Mar, Calif., and runs Atticus Entertainment, a production company that develops projects for HBO and other networks.

For HBO, Lampley did a one-hour retrospective when Ali died in 2016. “I pointed out that no other sport produces meaningful sociopolitical figures that can change their cultures the way boxing does,” said Lampley. “Only boxing produces a Muhammad Ali.”

“Fighters have a unique pipeline to the public heart.”